Why You Need To Be Intentionally Vicarious

By Todd YoungbloodAugust 31, 2018Uncategorized
No Comments

IMHO, you need to be Intentionally Vicarious. You need to because doing so will fuel your creativity, and creativity is crucial to personal, professional and business success. In this week’s episode, I’ll provide some evidence that proves the power of creativity, and a few thoughts on how to increase your own.

Ever do a Google search on the importance of creativity to personal, professional or business success? When you do, you’ll quickly get the feeling that there’s a broad, general consensus about the massively critical importance of creativity. Reading through just a little bit of the material reinforces your intuition that it’s literally always somebody’s “creative flash” that enables the innovation that leads to solving a problem, clarifying new knowledge, inventing a new product or producing great art.

The apple fell on Isaac Newton’s head, and the Law of Gravity became obvious to him. The force that makes the planets “fall” around the sun is exactly the same force that made the apple fall. (Even if this one is apocryphal, it’s too well-known a story to not include…)

Albert Einstein watched a bug walking on a tree branch – from its own perspective in a perfectly straight line. BUT, the bug was quite clearly following a curved path. Aha! Einstein suddenly realized that all of space is curved, and that observation contributed to his theory of relativity, E=MC2 and all of that other quantum mechanical weirdness that baffles the daylights out of normal people. 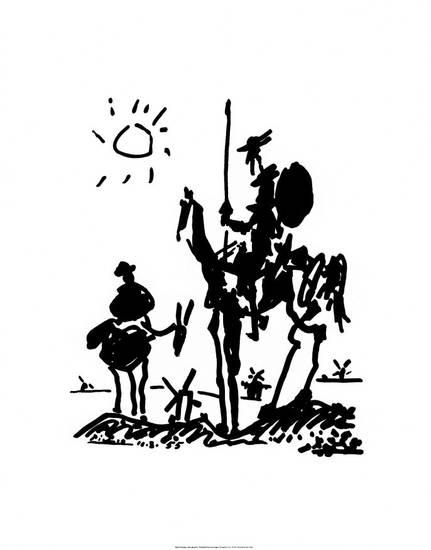 Pablo Picasso stumbled across an old bicycle seat and a rusty set of handlebars. Bam! To him it was obviously the Tête de Taureau – the Bull’s Head – my 2nd favorite of his masterpieces. (#1 for me is his Don Quixote.)

Steve Jobs always followed his lifelong passion for calligraphy. It fueled so much of the amazing design elegance in Apple products.

Samuel Colt, a sailor as a young man, spent a lot of time staring at the wheels of sailing ships. To him it became obvious to apply the same principle to the single shot pistol – and he invented the revolver. Later, wanting reduce his manufacturing cost, and as he happened on Adam Smith’s insight into the value of division of labor in a British pin factory, he cooked up the idea of the assembly line.

Henry Ford wanted to make a car that was affordable to everybody. He wondered if Colt’s assembly line idea might work in a car manufacturing plant. Ta-da! (And you probably thought Ford invented the assembly line.)

The list of “The Power of Creativity” stories goes on and on… And there’s empirical data as well!

So, yes, it’s important for all of us to nurture, develop and apply our own creativity.

Take particular note, by the way, of the word “apply” in that last sentence. Creativity is essential, but alone, it’s not worth much – if anything at all. It’s the application of a creative idea to actually create something that produces a tangible innovation that matters. Innovation in turn produces productivity, and increased productivity is what ultimately leads to a higher standard of living. This is precisely why CEOs universally focus on creativity. (Need I also point out that striving to provide a “higher standard of living” for our families is why most most of us work so hard?)

So again, yes, it’s important for all of us to nurture, develop and apply our own creativity.

The next obvious question is, “OK, so how do I nurture and develop my own creativity?” I’ll submit that there are only two ways:

Now I’ll be the first to acknowledge that luck had a good bit to do with the success of just about every successful person in history. It’s certainly true in my own case. But do you really think that depending on luck is a good strategy? The old cliché, “The harder I work the luckier I get,” became a cliché for reason. It’s true! So… work at it really, really diligently is the only real choice.

Keep that in mind as you think through the following 5 “how to” tips. The first 3, “Do!” “Walk Away” and “Research Creativity” are pretty simple – even obvious. The last 2, “Acquire Broader/Deeper Knowledge” and “Communicate,” not so much.

Do!!! Confidently do!!! All the time. Even when you’re not so sure of yourself… The simple act of confidently and aggressively taking action frees up the brain and will bring additional insights to light. The simple act of taking action also transforms you into a leader of sorts. Others will follow and add their own brains to the mix. Conversely, endlessly cogitating about what might work only leads to more endless cogitation.

Walk away. When you’re stuck, just walk away for while. (You really didn’t need me to tell you such an obvious thing, did you?) Use the “5 minute rule.” When you realize you’re stuck, set a 5 minute timer. If you haven’t solved the problem by the time it goes off, walk away and do something else. A corollary rule is “Sleep on it.” Frame the question mentally one more time just before you go to bed. I’m continually amazed at how well that works.

Get familiar with Creativity Research. Reading, listening to or watching something about creativity makes you more creative and adds to your bag of creativity tricks. One of my long-time favorites is the notion of “Six Thinking Hats.” Great stuff. Also take a look at different “intelligences.” Some say there are 5 types, others say 8, Here’s a link to one that identifies 9.

OK, those were the 3 easy ones. Now onto the two that take more effort…

Continuously Acquire Deeper/Broader Knowledge. I won’t bother suggesting how to gain more deep knowledge. You are either doing that already within your own chosen field so you can successfully do your job or you’re too lazy to implement any these 5 suggestions anyway. Keep doing what you’re doing.

As far as gaining broad knowledge goes… Well… That’s what Intentionally Vicarious is all about! Every episode begins with my commitment to explore, question, learn, think and have more fun than anyone else I know. So..

You need to deliver 100 widgets from your factory to your most important customer in 2 days. You need 10 trucks to do so and you only have 5 available. Tough problem… What if I cut off availability of the other 5 trucks. What would you do if that were the situation?

The “blur the distinction” part of Elide is the most fun and most effective. Take a bit of your deep knowledge and a bit of your broad knowledge. Cut each in half and then re-combine the bits in different ways. You’ll be amazed at the creative ideas that flow!

Think in terms of building centaurs! One theory about the origin of the half-man, half-horse centaur of ancient Greek mythology stems from the fear generated by a horseback-mounted invading army of Minoans. The Greeks hadn’t ever conceived of riding horses, and so to them, these beasts looked like – well – centaurs. We’re all familiar with Greek mythology, not Minoan mythology right? Might it have been a feverish focus on fending off centaurs that led to the eventual Greek defeat of the Minoans? In any case, when faced with a really tough problem, go build a centaur!

Communicate! Ever find yourself struggling with the “gap between your mind and your mouth?” In other words, inside your own head, you clearly understand – you know you know the explanation – but you just can’t get it across to the other guy. I know you have. It happens all the time. Actually it’s usually even worse. You confidently state that you – genius that you are – can easily fix the problem. Then you start explaining and realize that you’re babbling.

Now there are, of course, lots of different ways to communicate. I’ll emphasize only one – writing. Most people are terrible writers. Odds are, you are not very good at it. Not because you’re dumb, but because you don’t do it that often.

Writing is the best way to clarify your thinking.

And you know what you’ll have at that point? You’ll have not only a well-written page, but also you’ll personally have a MUCH, MUCH deeper, MUCH, MUCH broader understanding of and appreciation for whatever it is you wrote about.

Seriously now… Think about how much continuous repetition of the writing process will boost your personal creativity.

So to sum all this up. More creativity will inevitably and inexorably lead to more personal and professional success. You must therefore commit to constantly boosting your own creativity. You can do so by planting in your head the fact that creativity happens when deep knowledge collides with broad knowledge, along with the 5 “how tos.” Do! Walk Away! Research Creativity! Acquire Broader/Deeper Knowledge! Communicate! (…especially in writing.)

I’m your Intentionally Vicarious host, Todd Youngblood – hopeful that you’re a bit more creative now than you were before you heard or read this episode – reminding you that being Intentionally Vicarious is a critical part of your personal creativity-enhancing routine – and, yeah, I’m still having more fun than anyone else I know.