The Greatest Clown Show On Earth!

I’m feeling the need to rant today… Now, normally, I keep my rants focused on a single issue, but this time I’ve gotta’ go with two. Any logical, sane person would keep these topics separate, but… 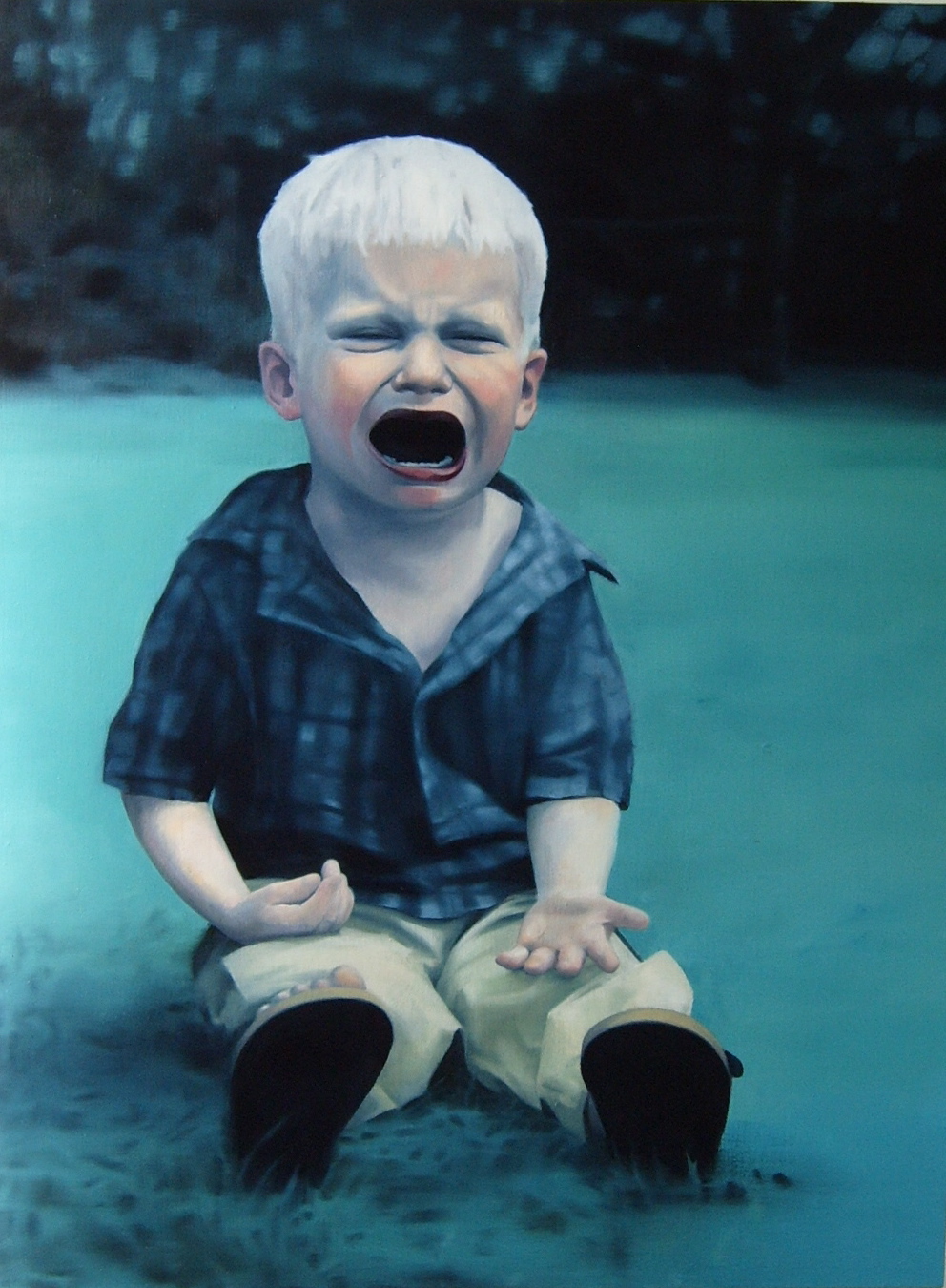 My view of the typical member of the U.S. Congress…

Both the United States Congress and the executive branch are currently hell-bent on smashing the two together, so I’m going to take advantage of the opportunity for a double-header bashing of our politicians and their foolish shenanigans. As I record this, (assuming 1/9) the U.S. federal government has been partially shut down for 18 days. The impasse on voting to approve the budget is centered on President Trump’s insistence on getting his border wall, and the Democrats’ refusal to go along.

If only it were that simple, and not so obfuscatingly cluttered with political grandstanding.

First the budget approval component… Ughhhhh… The current issue isn’t even about actually approving the budget! It’s about approving another “Continuing Resolution” so the feds can keep spending cash that’s in the yet-to-be approved budget until they get around to actually approving it. Here’s some perspective… In fiscal 1998, Congress missed the budget deadline by 56 days. Terrible performance, right? Two months late? On something that fundamental? In fiscal 2017, they were 216 days late! That’s over 7 months late! In the spirit of giving credit where credit is due, over the last 40 years Congress has indeed passed the federal budget on time. Oh… That was only 4 times in the last 40 years… They’ve done their fundamental job 10% of the time in the last 40 freakin’ years!.

Who could even hold a job with that 1998 level of performance? And after 20 years have elapsed, they’re 288% WORSE! Really? And somehow we’re supposed to be OK with that? 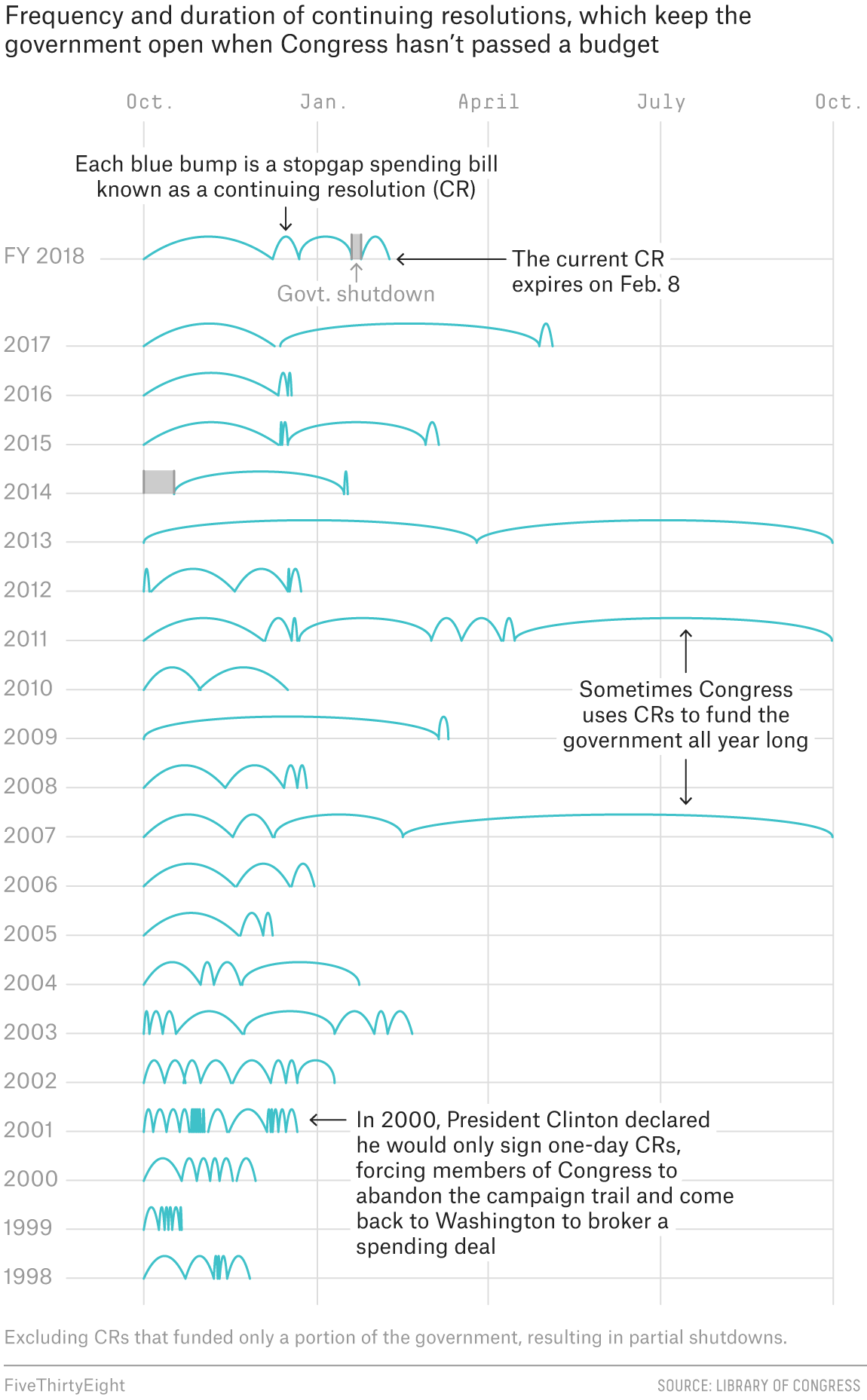 For 187 years in a row, Congress got the budget done on time. Then in 1976, just-post-Watergate, we were treated with the very first so-called “government shutdown.” It actually was just a partial government shutdown then. As it has been for the subsequent 21 shutdowns including this one. (Just as an aside… We’re assured it’s only the “non-essential” parts of government that are shut down. If something is non-essential, why the hell are we spending money on it to begin with?)

And another thing… The annual budgeting process that they’re all fighting about addresses less than 1/3 of all federal spending! So that must mean 2/3 of the total spent by Washington is really essential, some of what’s left is just regular essential, and the rest, I guess, is the  reserve essential. The buggers conjured up that “reserve essential” so that on an annual basis they can create a media-storm, grandstand about the demons in the other party and ramp up the fundraising for their next election cycle.

How about supporting THIS idea for the next election cycle and next viral internet meme???

All pay for all salary and all expenses for all members of Congress and all Congressional staff personnel will be suspended during all of every government shutdown, partial or otherwise.

Allow me to repeat that…

All pay for all salary and all expenses for all members of Congress and all Congressional staff personnel will be suspended during all of every government shutdown, partial or otherwise.

You wanna’ play games? Fine. Put your money where your grandstanding mouth is first. Put your own paycheck at risk along with the paychecks of the corps of minions working for you. Then let’s see how long it takes you to work things out.

OK… Time to shift to this nonsensical battle over a border wall. Every time I read, hear or see something about it – including that clown show of a national address by Trump followed by Schumer and Pelosi –  the image of a bunch of obstinate, empty-headed, crybaby 3rd graders leaps to my mind. Here’s a summary of the debate thus far:

So… Red and Blue both agree that good border security really is extremely important. To further reinforce the point, you tell me what U.S. President made the following statement?

“We simply cannot allow people to pour into the United States undetected, undocumented, unchecked and circumventing the line of people who are waiting patiently, diligently and lawfully to become immigrants in this country.”

It was Barack Obama. But wait!

How can these politicians who need to raise enough money to get re-elected gin up a major media maelstrom when both groups are pulling in the same direction? That’s not going to work. They need somebody to tee up a stunningly simple demand and repeat it endlessly so the other side can pick at it – endlessly.

Seriously… How different is this from Trump vs. Schumer & Pelosi on national TV the other night?

In steps Candidate Trump with the same idea the Chinese had circa 1644. Let’s build a wall to keep ‘em out! But, say all the Democrats, how can we generate a huge controversy about that? We’ve been building fences and walls on the Mexican border for decades. As recently as 2006 we all voted in favor of building an additional 533 miles worth of wall to add to the 120 miles of wall that already existed. We have a wall along 1/3 of the border already. We’ll look like idiots if we do an about-face and begin to oppose the idea.

“No worries!” say Schumer and Pelosi. They point out that the vast majority of Americans can’t or won’t remember what any politician said even one year ago, no less 12 years ago. Up pops another Democrat who says, “Hey, if we also start harping about how a wall is an affront to basic humanity – downright immoral – those who already think Trump’s just a tad off-kilter will really get riled up with him.” “Oh yeah!” says another, “Let’s call it racist too. That always works.”

And all the Republicans stare at each other scratching their …noses and saying, “Hot dog, the opposition has given us all kinds of material to work with!” So off we go with the you-know-whating contest.

Trump kicks it all off by demanding a wall. A cement wall. No, a steel wall. No, a wall made with American steel. No, a barrier. NOT building it is immoral, you know. Hey, Mr. President, if a wall has slats you can see in between is it still a wall? Or is it a fence? And is an electronic wall actually a wall? Or is that a barrier? Will you declare a national emergency maybe? As my brother said, “That sounds like we are one of those 3rd world countries heading to a dictatorship!” Personally, while I lean decidedly right, I think he’s got a point.

And then there’s the $5.7 Billion Trump wants to fund his wall. Just for the record, that’s a whopping 0.13% of the federal budget. With just one year’s worth of what Americans spend with the Mexican drug cartels, we could build him four of his walls!

Look, I’m no student of border control, but here are a few obvious facts that come to mind immediately and are obviously relevant and should become – OBVIOUSLY MUST BECOME – at least the starting focus of all this debate:

Want an actual video look at the entire border? Check this out from USA Today. Pretty cool actually!

And back to the drug cartels. Those wonderful folks who take in upwards of $23 Billion per year from the U.S. in illicit drug money. They also moonlight for extra cash via human trafficking, money laundering and “coyote” services.

Might we find some border control benefits by attacking that problem more intelligently? It’s admittedly beyond the scope of this episode, but legalizing drugs would remove $23 Billion annually from the U.S. “aid” going to those criminal SOBs. (I’ll come back to that notion in a future episode.)

My point here is that there’s all this caterwauling and wailing and gnashing of teeth and backing and forthing by all the media and political pundits and it’s all focused on getting attention. Period. It’s nothing but freaking politicians screaming, “Look at me! Look at me!”

Cut the crap, Congress. EVERYBODY agrees that better border control is essential. So do it! That’s what we paying you and your bloated congressional staffs to do. If you don’t, We The People are going to figure out a way to cut off the salary spigot on you and all your office-mates.

I’m your host Todd Youngblood, and I feel a little bit better now that I’ve gotten all that off my chest. But actually… the clown show in D.C. will continue. They’ll do something before the day is out to set me off again. Oh well… Good thing I’m having more fun than anyone else I know.