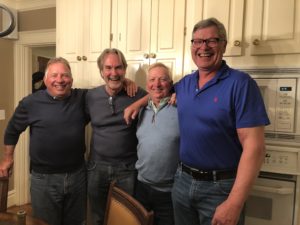 Are we having fun yet?

My goal for this episode is to kick off a new round of the game “Can You Top This?” Lots and lots of guys get together with a few buddies and go on a trip to get away from it all. Quite a few even do so several times. I’m ready to call my version of the “mancation” an institution.

(And with a nod to political correctness, let me acknowledge the fact that there is a female version of this life best practice. But, being a guy, I’m quite simply not qualified to address anything more than the guy’s perspective.)

It all started 27 years ago. At age 38, I had been happily married a dozen years, had two little kids, a nice house, a few bucks in the bank and had just left Corporate America to launch my first entrepreneurial venture. I was on a high at the time. Felt like King Kong. It just seemed like the perfect time to kick off an annual soiree.

It’s not about golf.

So why a golf trip? Although I’ve played the game on an off since I was a kid, I can’t say I ever got particularly passionate about it. For me, it’s always been nothing more than a pleasant diversion. So how does a “pleasant diversion” morph into a nearly 3-decade-old tradition that I continuously look forward to? After boiling it all down, It’s just 3 things:

The no-holds-barred atmosphere that magically apprears the instant the group reconvenes is nothing short of remarkable. If my intelligence and/or appearance and/or physical coordination were not insulted multiple times within the first hour, I’d begin to feel like an outcast. Also on Day 1, consumption of alcohol – mostly wine these last few years – spikes. Obviously, that further fuels the insult competition. And it doesn’t stop until the last guy is dropped of at the airport for the flight home.

Which reminds me, that I need to throw in a brief reality check here… We have dialed back the intensity. Year 1, Day 1, we stayed out carousing till the bars closed at 2:00 AM, slept for 4 hours or so and hit the first tee at dawn. The story about standing over the ball for that first shot and “wondering if I was going to fall down, throw up or hit the ball” NEVER gets old. That pattern was repeated. 36 holes a day for 4 days was the norm. More than a few times we played the last hole or two in the dark. That was followed by an amazing dinner, more carousing, a good 4-5 hours of sleep, then back on the links at dawn. Remember now, we were all in our 30s at the time.

These days we’ll usually play 27 holes 2 or 3 times and a normal 18 the rest of the time. While one or two of the group, might still be awake at midnight once or twice, at 60-something we all tacitly agree on the need for something much closer to a normal night’s sleep. And carousing at the bars? Not so much any more. It’s normal now to go directly from the golf course to the home of whomever is hosting. Even still, the amount of wine consumed is measured not in bottles, but in cases.

With only one exception, we have eaten like kings on the golf trip. We all reflect back on the amazing appetizer tradition. Mini-lamb chops and martinis still ranks as the best ever in my book. The parade of great steaks, stone crab claws and wide array of high-end ethnic dishes continues to stretch out. I figure the group has had just shy of 100 of these extravagant dinners.

Except for that one year in Scotsdale, AZ… We decided to have “a drink or two” the first night before going out for dinner. We overshot the one or two target and hung out at a bar until after restaurant closing time. Jack-In-The-Box was literally the only option we could find. Night 2, ditto. Night 3, OMG… ditto again. We did step it up the last night and landed at an Olive Garden. Like I said, OMG! Thankfully, that year was an anomaly.

As I’ve already noted, we have opted for near-normal amounts of sleep and swapped out the bars-after-dinner routine for an evening at the host’s house as we’ve aged. We have not, however, appreciably decreased the reversion to adolescence. Picture if you will, 4 60-something guys, all intensely focused on winning a freaking bean-bag tournament. And if it’s not bean-bags, it’s darts. What mature person gets into a fierce argument over whether the score is 11-5 or 11-6? That’s what WE do. And somehow it really IS important – until it’s time to pour another drink or hurl another insult.

Guys really are pretty simple-minded and easy to keep happily occupied. Golf, Food, Darts, Booze, Bean Bags and Banter are all that’s required to get the job done.

I mentioned stories as one the 3 key factors that make my golf trips awesome. It’s the stories about The Golf Trip that have made it a legend in our own minds. Given the nature of our behavior, ridiculously hilarious antics and slip-ups are inevitable. We even award a plaque for the most memorable screw-up. Trust me, every year it’s a serious challenge to decide which of us has done the best job of proving our superior obliviousness and/or incompetence. Reliving these incidents was a core driver behind our recent decision to start doing these trips twice each year.

Now… You need to realize that about half-way through our very first golf trip, the group instituted censorship rules to protect our personal and professional reputations. That cone of silence remains in force, so I am therefore not able to provide a lot of detail. Suffice it to say, that things like raw-egg-drinking wagers, something related to snail trails and forgetting to put the basket under the practice tee golf ball dispenser and therefore looking like an idiot to the other 10 foursomes warming up there are all part of the mix.

Think about it. 27 years worth of opportunities to inadvertently screw up in front of 3 unforgiving, unforgetting so-called friends. We will never run out of Golf Trip stories.

Without a doubt, the Cast of Characters is the secret sauce that has and continues to make it all work.

First, there’s Jeff. His parents and my parents were friends. I literally do not remember meeting this guy, since at the time, we were both infants. Over the years, we’ve both moved around the country, dealt with all the crap life throws at all of us, and the friendship has never wavered. He was the one that got the whole golf trip thing going. And although the record-keeping is suspect, we all agree he holds the record for highest number of plaque-winning years.

Next, there was Bobby. Sadly, I’ve got to say “was” because we lost him to a nasty disease nine years ago. That said, I’ve never known such a larger-than-life character. If he was awake, the banter was flowing non-stop, the cart-girls selling beer out on the golf courses were getting out-sized tips, and one of us was getting set up for some future zinger or practical joke. His signature line since high school was, “I didn’t do it.” Which of course, was his way of claiming credit for every shenanigan that made anybody crack a smile. To this day, he gets toasted multiple times per golf trip and the Bobby stories remain endlessly entertaining.

Danny joined the group in year 2 on a probationary basis. When or if he ever achieves permanent membership status remain unclear. He’s a good golfer, a one-liner comeback artist, makes a bad-ass caesar salad and is periodically successful at being the adult-figure for the group. He’s also the token left-winger, and serves as a convenient whipping boy during our political discussions.

Jack is the new guy. Whatever…

So there you have it.

For almost 3 decades, 4 guys have sustained a tradition of an annual – now twice a year – golf trip where our behavior is over-the-top immature, borderline irresponsible and astonishingly great fun.

And no… I’m not really going to dismiss Jack without comment. Think about this. Two of us have been buddies since birth, the third guy has been part of the gang for 26 years and Jackie-come-lately fills in the open slot left by the legendary Bobby. Not an easy row to hoe. Took the guy all of 90 seconds to fit right in. Plus he’s a legitimate musician, which loads a whole new and additional perspective to the never-ending banter.

So now I’ll repeat… For almost 3 decades, 4 guys have sustained a tradition of an annual – now twice a year – golf trip where our behavior is over-the-top immature, borderline irresponsible and astonishingly great fun. If you don’t have or don’t immediately start some similar sort of tradition with a group of your own buddies, don’t even think about talking to me about how to have fun.