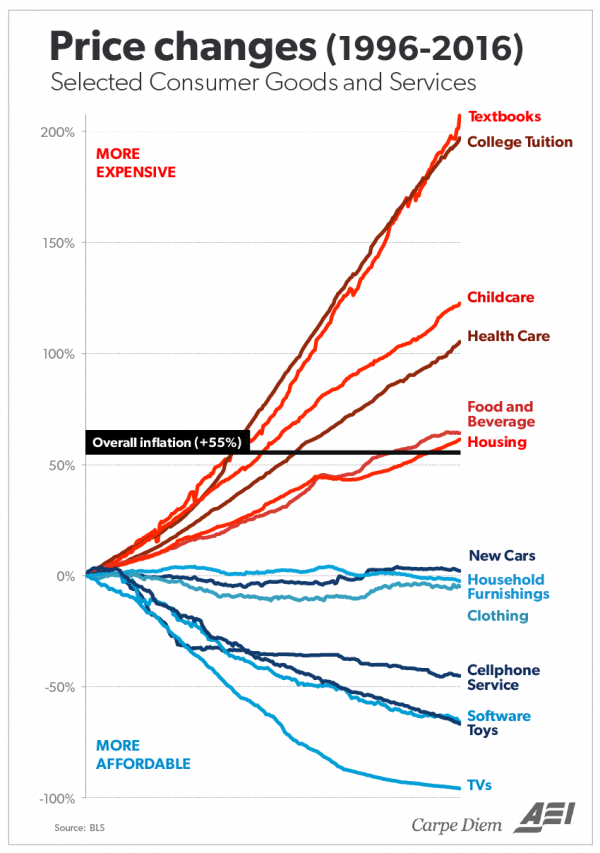 You’re wondering who’d be dumb enough to do something like that, right?

Congress, that’s who. Mind you now, this was all done for a genuinely legitimate and extremely noble cause. The modern economy demands that we as a nation are highly educated. The modern economy runs on advanced and specialized knowledge, which means that the most knowledgeable organizations and countries will be best-positioned to compete effectively. It made – and still does make – perfect sense for the federal government to address the higher education issue to help get the right learning delivered to the right people at the right time in the most effective manner possible.

Does that mean blindly throwing money at it with no consideration of unintended consequences? I don’t think so. But… that is, in fact, exactly what Congress did. Repeatedly. Over a period of decades. And what most of the current presidential hopefuls are urging us to do again, only this time on a much grander scale.

The very first federal student loan program was the modest National Defense Education Act of 1958. Congress didn’t really begin throwing its weight around until the late 80s when federal student loan guarantees became the vote-getting thing to do. If you’re interested in all the gory legislative detail, check out this History of student loans.

The key point to remember here is that the goal of all this legislation was and is to make higher education affordable to everyone regardless of their ability to pay for it. As I said, it’s all aimed at a genuinely legitimate and extremely noble cause. But maybe in their zeal to do good for we citizens, Congress forgot about reality. Maybe just maybe they forgot to consider basic economics and human nature – what I like to call the The Big Three Ss of Reality:

Allow me to be a bit more blunt… Congress totally ignored the very basics of the Law of Supply and Demand.

Congress served its own self-interest by passing at least 19 bills they proudly touted as “making higher education more affordable,” when in fact what they did was subsidize the banking industry. At the same time they totally ignored the fact that lending institutions, colleges and universities would respond to this legislation to serve their own self-interest.

Let’s dive into Supply and Demand. Economists, like Politicians, are hell bent on convincing us that they’re smarter than the average bear. That Economics is complex and difficult to understand. That being an effective Economist requires a superior intellect – like their own – not like yours or mine.

This mind-set leads to obfuscation; taking the simple and making it complicated. The Law of Supply and Demand provides a terrific example. Here’s how whatever economist wrote the Wikipedia entry describes it:

“In microeconomics, supply and demand is an economic model of price determination in a market. It postulates that, holding all else equal, in a competitive market, the unit price for a particular good, or other traded item such as labor or liquid financial assets, will vary until it settles at a point where the quantity demanded (at the current price) will equal the quantity supplied (at the current price), resulting in an economic equilibrium for price and quantity transacted.”

Take Rolls Royce for example. Right now, you can buy a basic, stripped down model for about $312,000. The base price for the flashier models starts at $450,000. They sell around 4,000 of these vehicles per year.

What would happen to demand if the price for a Rolls suddenly dropped to the average for a new car? To around $37,000? You know exactly what would happen… You, me and several million other people would run out and buy one.

On the other hand, how many Ford Fusions would get sold if their price suddenly jumped to $300,000? The answer, of course, is obvious – ZERO. There… You really do understand the basics of Supply and Demand.

Now let’s apply this to student loans. Up until 1958, and effectively until the late 80s, Supply and Demand regulated their price and availability. Then, Congress began to aggressively implement federal student loan guarantees. This very dramatically decreased both the cost and the risk of making these loans for the lending institutions. Exactly as you’d expect, as the cost and risk plummeted, the loan volume and the number of less qualified borrowers skyrocketed.

In 20 years, here’s what has happened:

First and foremost, the politicians. They claim credit for helping thousands of their constituents in pursuing the American Dream via higher education. That means we should give them more campaign donations so they can get re-elected and do even more wonderful things. Do they give a crap if those loans get paid back? No, they do not. Their constituents want the loan – Right now! – and they want the vote – Right now! Handing out cash is all that matters. Paying it back is someone else’s problem for another day.

Next in line are the lenders. Let’s pretend we are in the business of lending money. Since we need to earn a profit to stay in business, we’re very picky about to whom we lend. Unlike the politicians, we need to be pretty sure the borrower will pay us back both principal and interest on a timely basis. We want all kinds of personal financial statements and we do all kinds of credit checks to ensure that will happen.

But wait! The Federal Government is guaranteeing a whole pantload of student loans! Our risk on these loans has dropped to ZERO! We can now very aggressively pursue our own self-interest and loan out as much as we possibly can. Golly whiz, thank you, Congress! We couldn’t have come up with a better way to subsidize the banking industry ourselves!

And then there are those other lenders out there who are not as ethical as we are. They’ll pursue their own self-interest in ways that are more than just a little bit shady. They’ll lie, cheat and steal as much as they can. They’ll mislead every student borrower they can get their hands on, knowing that the full faith and credit of the United States Federal Government is behind what would otherwise be terribly, unacceptably risky loans.

Any more self-interested parties at this party? Yup! How about the colleges and universities? That’s where all the cash ultimately lands, right? Let’s follow the money!!! And let’s remember Supply and Demand. All of a sudden, cash-laden students are coming out of the woodwork. Demand for higher education spikes. Well surprise of surprises, colleges jack up the price!

If you think health care costs have shot up faster than anything else in USA, you-are-wrong. Take a look at the graph to the right. Health care is nothing – it’s a bargain – compared to college tuition and textbooks. From 1988 to 2019, inflation-adjusted average tuition and fees more than doubled at public two-year and private, nonprofit four-year institutions, and tripled at public four-year institutions.

Image that… University presidents who want new buildings and higher salaries and dramatically larger administrative staffs. College Professors who also want higher salaries, and of course “need” to spend less time in the classroom so they can write those high-priced books, do more research and work a few more private consulting gigs. All that requires LOTS more cash. Good thing those students keep scarfing up those federally subsidized and guaranteed loans and passing it along.

Who could have possibly predicted that pumping an extra $1.6 Trillion into the higher education industry would cause prices to rise? YOU could have! ANYBODY with the most rudimentary grasp of Supply and Demand could have.

Which brings me to the third and most powerful S – Stupidity.

OK, I know. Stupidity is a strong word. Sadly, it is not inappropriate. Stick with me through the following example which is anything but rare. Student X gets accepted into a private college with median annual tuition and fees of $35,000. That gets paid for 50% out of pocket and 50% with a loan. At graduation, X will owe $70K to be repaid over 10 years with 5% interest or $742/month.

X gets a degree in, let’s say, Counselling Psychology, and lands a job in this field which has a median income of $32,000. Not likely X can actually get that much right out of school, but let’s go with it; and take a look at X’s monthly cash flow using expense numbers that are on the low side of realistic.

OK, let’s pause here to note that X now has $38 left. $38. What about that $742/month student loan? And the inevitable, unexpected expenses? And maybe a few bucks to have some fun? Ummmmm. Nothing left for any of that. Nothing.

Did X think about any of this before heading off to college? Apparently not. That loan wasn’t actually Other People’s Money, but it sure as hell looked like it! X made a stupid financial decision with what looked like OPM. Is this financial analysis too complex for mere mortals? No! NO – IT – IS – NOT! Anyone who passed 5th Grade arithmetic can do it in 10 minutes.

But why worry about the future when the federal government is ready to help you get loads of easy money right now???!!!

Sorry, but in a sane world, NOT doing such a simple analysis is stupid. And worse yet, there’s yet another aspect of this scenario that sets a whole new vicious, negative cycle in motion.

For the record, I’m not picking on Counselling Psychology majors. I use them as my example because according to NPR’s Planet Money, it is the #1 least lucrative college major. There are lots and lots of other potential majors that are equally noble, but pretty much just as un-lucrative. I’m not saying, “Don’t major in one of them.” I am saying, ”Don’t expect to be able to pay your bills if all you’ve got is one of those degrees.”

Anyway… Demand for Counselling Psychology skills is low and therefore the jobs are few and the salaries are also low. The only jobs available are with employers who can find the money to pay the new Counselling Psychology graduates. And where does the money to pay someone with these skills come from? Why it comes from federally guaranteed student loans! Thanks, federal government!

Let’s reiterate – and be very clear about the vicious, negative cycle created by easy money from federally guaranteed student loans:

I dare I say, that is really stupid.

Can you think of any other un-lucrative fields of study? Let me rephrase that question. How horrified are you to contemplate the fact that tax dollars are GUSHING into a huge number of these educational black holes?

And now all these Presidential Candidates are suggesting what??? Forgive all the outstanding student loans and moving forward, have taxpayers pick up the entire tab to educate thousands and thousands of additional people – literally anybody and everybody – with skills that may have little or no marketable value? Seriously?