By Todd YoungbloodMay 11, 2018Bicycle
No Comments 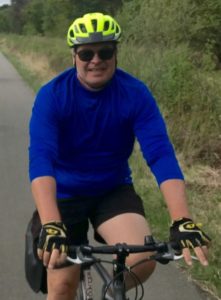 Your IV host having more fun than you!

As you might guess, a 10-day bicycle trip pedaling through the Netherlands and a bit of Belgium is a heck of a workout. Day 1, although pre-biking, included over 16,000 steps wandering around Amsterdam. Then it was 30-40 miles per day on a bicycle for the next 8 days. Day 10 was another 13,000 or so steps wandering around Amsterdam again. And this year I only gained 4 pounds. A new record!

So yeah, my annual European Bicycle Trip truly IS a good bit of physical exertion, but it also involves a generous sampling of the local food and drink – along with a few other things that I’ll get into shortly. Suffice it to say that I’m already looking forward to my 8th trip next year in Dordogne in southern France.

…and if it’s not already obvious, “The Bike Trip” is yet another bit of proof that I’m having more fun than anyone else I know!

My brother, who’s responsible for getting me involved with this group excursion, commented that it’s 1/3 workout, 1/3 sightseeing and 1/3 socializing. I’ll comment on those three before I touch on the one additional dimension that I think comes into play.

First, the exercise part which freaks a lot of people out.

Most folks I talk to seem intimidated by the thought of riding a bicycle 30-40 miles in a day. Seriously though… it’s not that hard! Yes, a whole lot of calories get burned, but think of it differently. Could you ride a bike for 20 minutes? Then rest till you feel good and do it again… and again 5 or 6 more times over the span of 7 hours? YES YOU COULD! And if you’re already in decent biking shape you can ride with what we call the “Determined” group and go farther, faster and longer.

In any case, the “it’s too difficult” excuse is really, really lame and therefore unacceptable!

Then there’s the sightseeing part. 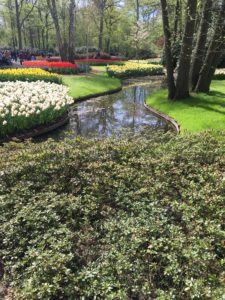 A tiny section of the spectacular Keukenhof

Tulip-wise, the Keukenhof is utterly astounding. Advertised as the largest flower show in the world, it has over 7 million bulb flowers spread over 80 acres. Words can’t describe it, and pictures simply cannot capture the sheer scale and unequivocal beauty of the place. My younger daughter responded to one of my photos by saying, “It looks like a fairy tale!” Great description. Just amazing.

We also had the chance to see the innards of a still-operational, traditional, early 19th century windmill. The original supports for the sails and the main axle have been replaced with steel, but all the rest of gears, cogs and mechanical parts are the original wood.

Picture it… Twenty mature adults standing around with mouths hanging wide open watching wooden wheels turn wooden axles and gears with wooden teeth, all controlled with ropes and pulleys. Round and round and round and we couldn’t get enough of it. It was intellectually humbling to see what clever people could create to harness an enormous amount of physical power with technology more than 2 centuries old.

And or course it couldn’t be the Netherlands without the dikes – which are literally EVERYWHERE! From simple, humble piled up dirt around a tiny farm to the massive 18.5 mile long Deltawerken that protects all of the southwestern Netherlands and is built to withstand a 1,000-year flood. Think about that next time you’re buying a house and the mortgage company wants to know it it’s safe from a 100-year flood. The Dutch know what they’re doing. We Americans are flood control lightweights.

I must also mention two additional features that might be a bit of a stretch to include under the sightseeing headline, but are offbeat enough to grab at least my attention. First, bicycles The 850,000 residents of Amsterdam own 847,000 bicycles. More than once, I waited well more than a few minutes to cross a street because of the line of bikes whizzing by. Literally more than a 1/3 of the residents in the whole country use bicycles as their primary means of transportation. Check out the photo of a bike parking lot near Amsterdam’s central train station. Thousands and thousands of them. VERY cool if you’re a biker like me! 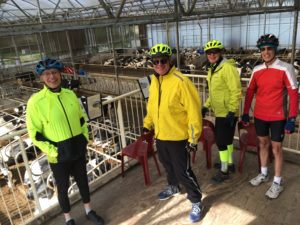 Dutch poop machines (…in the background!)

Then there’s the cows. Lots and lots of cows. Enough of them that our tour guide included a stop at a dairy farm to check out – well – the cows! Need proof? Check out the photo with me and three of my cohorts inside one the amazingly high tech barns. Seriously though, cow poop disposal is a national issue over there. 80 percent of farms in the Netherlands generate more manure than they can legally use. Getting rid of it all without significant negative environmental impact is a real challenge. And we think we have tough issues to deal with here in the U.S.

That bring us to socializing.

Frankly, the expansive array of conversation is consistently my favorite part of The Bike Trip. There’s a core group that goes just about every year, so I’ve gotten to know them quite well by now, and there are always also a handful folks that I meet for the first time. What’s cool is that literally everyone is and has been successful in life. There are entrepreneurs, executives, physicians, teachers and other professionals of every imaginable stripe. There’s one woman who runs a successful bookstore. In 2018. A successful, one-off, small town, brick and mortar bookstore.

The topics discussed range from what you’d expect like current events, politics, philosophy, music, cooking, business, kids and grandkids (LOTS of grandchild stories!) to more oddball subjects like bridge-building, military strategy, homeopathy and the best sort of coffee to serve if you happen to own a chain of pancake houses. The insights and stories are endlessly fascinating. 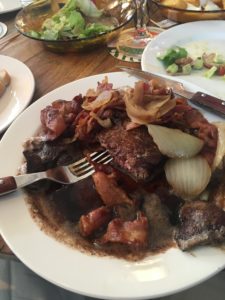 Of course a good bit of the talking occurs while peddling. (Although the heavyweights like me tend to mostly listen on the uphill stretches while we’re more focused on sucking in enough air!) Much of it also happens over food and drink, which consistently consists of the best of the local offerings. Everybody talked about the cheeses. (Remember all those cows?) …and the bitterballen, croquette sort of fried meat things that are amazing with beer.

I’m guessing maybe all the beer, bitterballen and bloviating had something to do with that extra 4 pounds I brought home with me…

Which brings me the final aspect of The Bike Trip that I find to be immensely re-invigorating and that’s introspection. It’s not just the uphill sections when I get too out of breath to talk, there are a host of other factors that place we peddle-pushers into a solo situation with time to think. Every year, I cogitate quite a bit about my own life-plan and those of my kids. It’s a great time to self-assess, then set and commit to a few new goals. As a podcaster and writer, I get to “think deep thoughts” Or at least what pass as deep thoughts for me…

For example, it was hard to not think about the walking tour through the Jewish section of Amsterdam that I took. Of course it included the Anne Frank house, but also included some disturbing insights. Like how 80% of the 80,000 resident Jews were killed during World War II. A frightening process aided and abetted by the local residents, including more than a few Jewish leaders. We also rode along the Netherlands/Belgium border for a few days and saw remnants of the electrified fence built by the Nazi military. Creepy. Very creepy, but also the sort of thing we all need to know and remember so we can avoid letting such atrocities happen again.

There was also time to think about much happier thoughts. Like the fact that both of my daughters are well on the way to delivering grandchildren numbers 2 and 3!. Ole’ grandpa here cooked up a whole passel of new ideas about how to properly spoil them.

All in all, it was yet another wonderful experience.

How can you possibly have more fun than anyone else you know if you don’t?