That don’t make no sense! (…i.e., The American Political Duopoly) 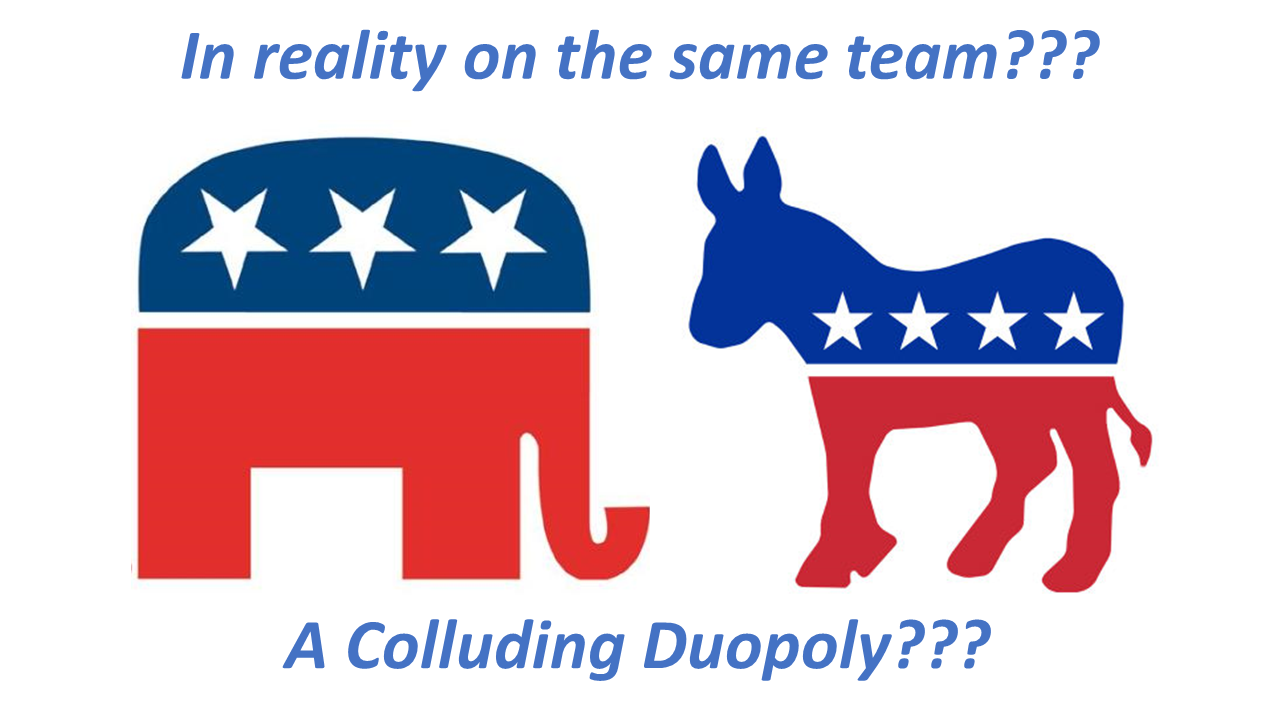 (Editor’s Note:  Thanks to subscriber Carlos Q for steering us to this topic!)

(…and Another Editor’s Note:  This episode runs a little bit longer than most. The reason is that, in my opinion, the topic is not only really interesting, but also important. For sure it involves an enormous amount of money. Taxpayer money, that is. And… it provides an economic explanation for why we have such unprecedented and escalating political polarization. If there was ever something you should share with your family, friends and colleagues, I think the information in this episode is it.)

So on with the show, whose title is…

“That don’t make no sense!”

A college buddy of mine would use that phrase whenever anyone stated an opinion about something that differed from his own. When you heard old Rich use that agonizingly twisted grammar, you knew that a cogent, detailed, embarassing-to-you rebuttal was forthcoming.

“That really don’t make no sense!”

Now… we all pretty much subscribe to the notion that Wahsington, DC is broken. That our political system has deteriorated into two deeply divided, constantly bickering, never cooperative factions. So how can the re-election rate get and remain so high when we all agree they’re doing such a terrible job? The answer came with a suggestion from a business colleague who pointed me to this episode of the Freakonomics podcast, and this accompanying Harvard Business School report. The key message of both is that…

Let THAT idea sink in… The remainder of both the hour-long podcast and 90-page report provide a cogent, detailed rebuttal to the assertion that Washington is broken. The fundamental insight is to think in terms of the American Political Industry.

Like all those other industries, the Political Industry has taken on a life of its own and has become totally dedicated to accumulating resources and influence for itself, and to enrich all of its component participants. It has been, is, and, without the intervention of We The People, will continue to be focused on the doggedly relentless pursuit of its own self-interest.

Stop thinking about American Politics as a public institution designed and operated to serve the public interest. It’s an industry, and like all other industries, is relentlessly pursuing its own self-interest.

And if you think that sounds bad, it’s actually worse. Much worse. The political industry is also a rigged, self-regulated duopoly. Let’s repeat these two notions, and get them cemented into our heads:

Let’s unpack that second concept a bit, because understanding it is a prerequisite for figuring out how to return our politics to its necessary and rightful role as a public institution serving the public interest.

So what’s a duopoly and why is it dangerous? Think monopoly only with two players instead of just one. Monopolies are dangerous because a single entity controls everything in its industry. There is no competition because the monopoly actively prevents competition. It sets prices however it wants and domineers over all of its suppliers.The customer gets screwed with higher prices and lower quality.

A duopoly is even more sinister in that while it still utterly dominates an industry, the two controlling players collude to maintain that domination while perpetuating the illusion of intense competition. Coke and Pepsi are a relatively benign example. Together they control 60% of the global non-alcoholic beverage industry. Together they pretty much call all the shots, and all the other industry participants dance to their tune. We think of Coke and Pepsi as bitter rivals, not as a colluding duopoly.

Boeing and Airbus together control 88% of the global jet airliner market. Together they pretty much call all the shots, and all the other industry participants dance to their tune. We think of Boeing and Airbus as bitter rivals, not as a colluding duopoly.

Democrats and Republicans control virtually 100% of the American Political Industry. Together they do in fact call virtually all the shots. A 3rd Party is totally lucky if they survive to compete another day. All the other industry participants dance to the tune of the reds and blues. We think of Democrats and Republicans as bitter rivals, not as a colluding duopoly.

Democrats and Republicans are, in fact, bitter rivals, BUT more importantly, they’re also a duopoly – a colluding duopoly.

So how do I justify accusing the Democrat and Republican powers that be of collusion that sticks it to we American citizens? How about we take a look at who regulates competition in the beverage and jet airliner industries and makes sure consumers don’t get screwed? Why it’s the federal government with its gazillion pages of anti-trust regulations! And who totally dominates the federal government? Yup… the Democrat and Republican powers that be.

Who regulates the American Political Industry? Why it’s the exact same Democrat and Republican powers that be! It’s not some objective, independent, outside institution that regulates it. It’s the friggin’ foxes guarding the henhouse!

And yep, you heard that 3rd example correctly. A single donor can contribute $847,500 to the DNC or RNC per year – in other words, $1,695,000 per two-year election cycle. How much can a door contribute to an independent candidate committee per election cycle? $5,400. That’s less than 1% of what either of the two parties in the duopoly can get.

I wonder how many more such funky, grossly unfair rules exist? Rules that erect enormous barriers to entry into the American Political Game for any other nascent 3rd Party or Independent?

I’ll keep hunting and let you know! But meanwhile, let’s take a look at some additional ugly effects perpetrated by this self-regulated, self-serving duopoly. Let’s look beyond the direct impact of effectively limiting our elections to a choice between the red one or the blue one. Let’s look beyond the two protagonists to all the other players in the political industry that are hell-bent on growing the political industry, the political pie if you will, and getting a bigger slice of it for themselves. There are a lot of them.

First you have the Suppliers of Products and Services. This includes: 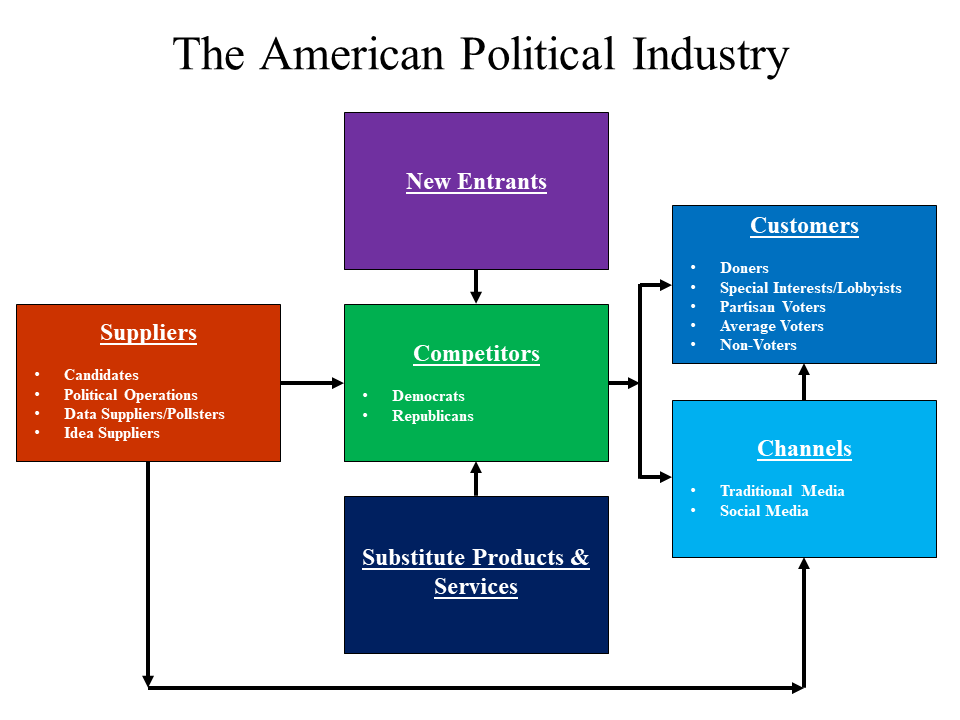 Then you have the Consumers of Political and Government Services. This includes Donors, i.e., Wealthy Individuals, PACs & Super PACs, plus Special Interests and the Lobbyists who represent them, plus Partisan Primary Voters, Average Voters and Non-Voters.

Note well here that while “Average Voters” and “Non-Voters” comprise the vast majority of the population, the duoply can and does ignore them. ALL of the political attention is focused  – surprise, surprise – on the sources of the money – Wealthy Individuals, PACs, Super PACs, Special Interests and the Lobbyists who represent them and the small minority of regular citizens who also happen to be rabid, Partisan Primary Voters. Need I remind you to follow the money?

Next come the Channels that facilitate communication between the political parties and consumers of political and government services. This is the Traditional Independent Media and Social Media. From the massive international media conglomerates down to the single, individual blogger, YouTuber and podcaster like me. I wonder if any of them are in it for the money…

In every other industry, there are two more significant groups. New Entrants to the industry and Substitute Product and Services. As I’ve already discussed, the duopoly has created massive entry barriers to new competitors. 3rd Parties and Independents get killed pretty much right out of the gate. And how is a Substitute Product or Service even possible? Unless we dump The Constitution, our system of government is all we’ve got. And make no mistake, The United States Constitution established the best and most effective system of government in the history of the world!

There are two more points I need to make in this episode, and they are both with regard to all of these participants in the American political industry:

A bit more detail… The best way to grow the political industry is for Democrats and Republicans to move further and further apart in their opinions and initiatives; to fight with one another more loudly, more often and more vigorously; and to demonize the other side as much as possible. Wealthy individuals, PACs and Super PACs dump all their money into efforts to make these things happen. Media then does everything it can to not only make existing controversy louder and more visible, but also to create additional controversy that may or may not actually exist.

The size and growth rate of the political industry is extremely hard to determine. This is due in no small measure to the fact that none of the industry participants has any incentive whatever to make it clear. That said, there are a few things we do know. Direct political spending by candidates for the last federal election cycle was at least $16 billion. How many additional unreported billions got spent, and how much so-called “shadow lobbying” took place? Hard to know, but there are lots and lots of zeros in whatever that number actually was!

In addition, there were somewhere around 19,000 lobbyists, campaign employees and consultants including staff at various political think tanks. Over 1,000 organizations had major consulting contracts for the campaigns. How much money flowed into all those buckets?

But all that’s peanuts, really.

The single largest impact of the political industry comes from spending by the federal government each and every year. That’s $4.4 trillion in 2019 and growing every year. Throw in another $3.6 trillion or so spent by the states.

And what about the cost of compliance with government regulations? I won’t even try to sort out how much and what percentage of regulation is good and proper vs. wasteful.

The point is, a rigged industry – the Rigged, Completely Un-Regulated, American Political Duopoly is calling all the shots. It’s enriching itself and all the other political industry participants and paying nothing more than lip-service to serving American citizens.

I’m your Intentionally Vicarious host Todd Youngblood; Literally horrified by what I learned doing the research for this episode; Stunned to realize that Washington DC is NOT broken. Not at all broken, but doing exactly what the Democrat/Republican duopoly has bastardized it into doing; And knowing that figuring out what to do about it is going to contribute BIG TIME to me having more fun than anyone else I know.

I normally end each episode by asking that if it got your brain working and/or your blood pumping, to please tell all your friends and colleagues about it. I’m compelled to make a much stronger request this time. It’s such a totally different message than any of us ever hears from our political leaders or anyone in the media. Spread this episode around to all of your family,  friends and colleagues. It doesn’t matter what side of the political aisle they’re on. We all need to figure out how to take back control from our overbearing, money-grubbing, out-of-control political duopoly.

WHY COMPETITION IN THE POLITICS INDUSTRY IS FAILING AMERICA

A strategy for reinvigorating our democracy