Stupid Choices For “Humanitarian Of The Year”

I want to be absolutely crystal clear about something right up front. Every name I mention in this episode is praiseworthy. Every one. Worthy of immense praise. Do not construe anything I say here as even the tiniest bit critical of any one of them. Each is or was a far better human being than I.  That said…

Our criteria for choosing humanitarian heroes is spectacularly flawed.

There’s a gigantic hole in our thinking about what being a “humanitarian” means. If we all were less narrow-minded, Norman Borlaug would be at the very top of the list of the greatest humanitarians of all time.

Norman who, you ask?

I’ll get back to him… Let’s first consider a few other names that come to mind more quickly. Mother Teresa, Mahatma Gandhi, Martin Luther King, Oskar Schindler, Andrew Carnegie, Bill Gates, Warren Buffett. Since I live in Atlanta, I’m compelled to throw in Home Depot’s Bernie Marcus who took over $250 million out of his own pocket to build the coolest aquarium in the world a mile or so down the street from my house.

What do they all have in common? It’s passionate, immensely effective leadership focused on providing benefit to mankind. In some cases, like the first few on my list, it’s selfless, direct, high-personal-risk involvement with a cause. In other cases, like the business people, the involvement is less direct and based on giving away a personal fortune.

But does a great humanitarian really need to risk life and limb – as did Oskar Schindler in saving so, so many Jews from the Nazi death camps – or create a colossal business from scratch – as did Warren Buffett? Are those the only two ways?

I think not. As I just mentioned, there’s a gaping hole in our common definition of the word humanitarian. Carnegie, Gates and Buffett provide a glimpse of that gap. So does Bernie Marcus. Today, some 385,000 people are employed by Home Depot. Forget about his philanthropy; let’s give the guy the credit for creating an enormous number of jobs. Stated from a humanitarian perspective, for providing a means to make a good living to hundreds of thousands of people. Let’s also give him some credit for the estimated 1,000+ people who become millionaires via the spectacular growth in the value of Home Depot stock options. Assuming those folks donated just 10% of their wealth, that’s a $100 million bequest.

The second and third-level effects of the humanitarian impact due to business genius are dramatically magnified and much, much greater than those directly created by the original entrepreneurs. But that still only explains a small part of the gap in our definition. There’s a bigger void in our understanding of what being a humanitarian really means. And that brings me back to Norman Borlaug.

Do you think a guy who saved a billion people from starvation qualifies as a humanitarian? 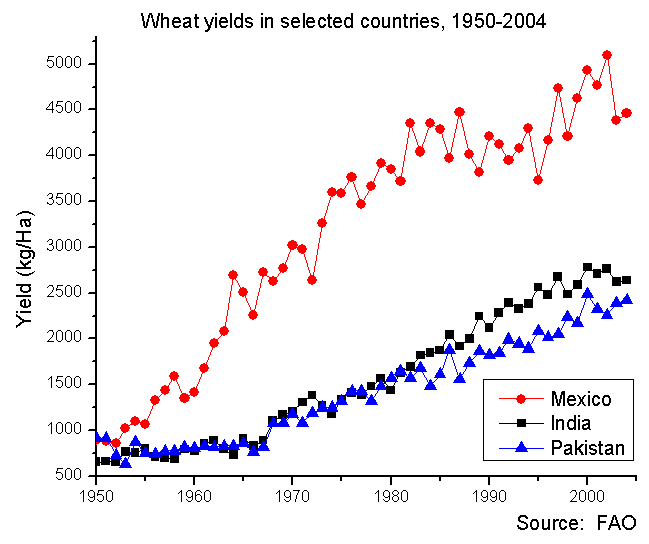 Take a look at the graph to the right. Mexico increased its wheat yield by a factor of 5 from 1950 to 2000 as a direct result of using Borlaug’s innovations. India and Pakistan got similar results in the same time frame. Across all the lesser developed countries in the world, wheat yields have more than doubled since 1960.

And of course Borlaug’s impact was not only on wheat production. There were also other cereal grains, techniques of irrigation infrastructure, innovations in management practices, and incredible advancements in the distribution of hybridized seeds, synthetic fertilizers and pesticides. Familiar with the  “Green Revolution?” I’ve pretty much just described it, and Borlaug was neck deep in the whole thing.

The guy’s “official” career spanned 37 years. He then “retired” to consulting, research, helping establish and operate the World Cultural Council, and teaching. He did all that for another 30 years right up to his death at age 95. In other words, once he got his education, just like everybody else, he got up and went to work every day. Not so much like everybody else, he kept at it for 67 years!

He made a good living and earned some fame – especially among all those swarming hordes of agronomy fans. But is he considered one of history’s great humanitarians? Had you ever heard of him before just now? How can this be? He saved a freaking billion lives! Billion! With a “B!”

How many of us have the opportunity to work like hell – for the rest of our lives – using our natural skills – leading or at least influencing the people around us and maybe just maybe stumbling into the right place at the right time and delivering a noticeable humanitarian impact? Ummmmm… That would be pretty much all of us.

Being a humanitarian is not just about what we do within our communities and our churches and the world at large. Everything positive that any of us does at our day-to-day job also counts. Everything.

Even if you can’t afford to donate cash. Even if other responsibilities leave you no time for volunteer efforts. Even if you’re totally clueless regarding how to directly help the less fortunate. If you work hard at your job every day, you are in fact a humanitarian. You are playing a vital role in the grander scheme that surrounds us all. You never know if the things you do at work might someday contribute to feeding an extra billion people; might snowball into something truly extraordinary. Especially if you keep at it for 30, or 40, or 50, or like our pal Norman, for 67 years.

I’m your Intentionally Vicarious host, Todd Youngblood – jazzed up with yet another dose of respect for everyone who gets up every day and goes to work with enthusiasm for their own individual contribution to humanity – still utterly convinced that Norman Borlaug is the greatest humanitarian ever – still believing that retirement is a really dumb idea – and still having more fun than anyone else I know.