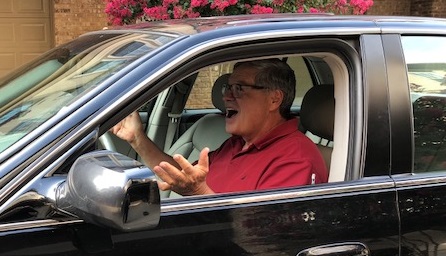 That’s it. I can no longer keep my mouth shut. Earlier today, I drove the 4.1 miles from my house to a friends house, and 4.1 miles back home. Since I live right in the heart of Atlanta, I’m constantly subjected to the dumb – sometimes downright dangerous – habits of my fellow drivers. Since I’m also by nature slow to get upset, I’m usually pretty much tolerant of them.

Today was an exception.

It prompted me to want to create a Top 10 List of Dangerously Dumb Things Drivers Do – but I couldn’t keep it to just 10. Anyway, here’s what happened… On the outbound leg, I witnessed a trifecta of driving dopeyness. It was numbers 2.2, 7 and 8. In the face of all that, my blood pressure stayed pretty much normal. On the return leg, however, yet another trifecta pushed me over the edge. A 3 had me rolling my eyes; a #4 caused me to yell at the dufus in front of me; and finally, a 9.3 combined with a 2 combined with a modified 10 combined with an 11 had me doing the classic, both-hands-raised-palms-up, WTF gesture.

Which brings me to the coup de gras that I mentioned earlier. The a 9.3/2/modified-10/11 combination that had me doing the classic, both-hands-raised-palms-up, WTF gesture. I was cruising south on the one lane each way Glen Iris Drive. There was a guy in a red BMW in front of me and a guy on a motorcycle in front of him. The rest of the street was totally deserted except for the parked cars lining both sides.

The motorcycle was going painfully slowly… around 10 mph in a 35 mph zone. The Beamer would get no more than 2 or 3 feet off his bumper, then back off, then zoom up to the 2-3 foot range. I watched this clown do this three times. Then…

He accelerates big-time, swerves out into the lane for traffic going the other way, and passes the motorcycle doing at least 50mph. As I’m muttering holy expletive deleted, an Atlanta Police Department patrol car lurches from a parking spot, cuts me off with lights blazing and siren blaring in pursuit of the boob in the Beamer. Thus the WTF gesture, and a large, stiff bourbon when I got home.

I’m your Intentionally Vicarious host, Todd Youngblood – dreaming of the day when the self-driving cars take over and eliminate all the butthead behavior. Meanwhile, I’m going to continue to focus on having more fun than anyone else I know.