Starving & Getting Eaten By Bears

An old friend and colleague of mine e-mailed me with an intriguing observation. “100 years ago, if you did not have common sense and situational awareness, you would starve or be eaten by a bear. Nature was self correcting. Today, modern society protects people with no common sense or situational awareness. They are growing in numbers and finding careers in politics.” (Thanks, Nick S!)

The more I think about the idea, the more I believe that he’s onto something. It’s especially true when both common sense and situational awareness are considered together. First some definitions. Actually… Everybody knows what common sense is, so let’s just nail down what “Situational Awareness” is all about. It’s pretty straightforward. Think of it as consisting of 3 levels: 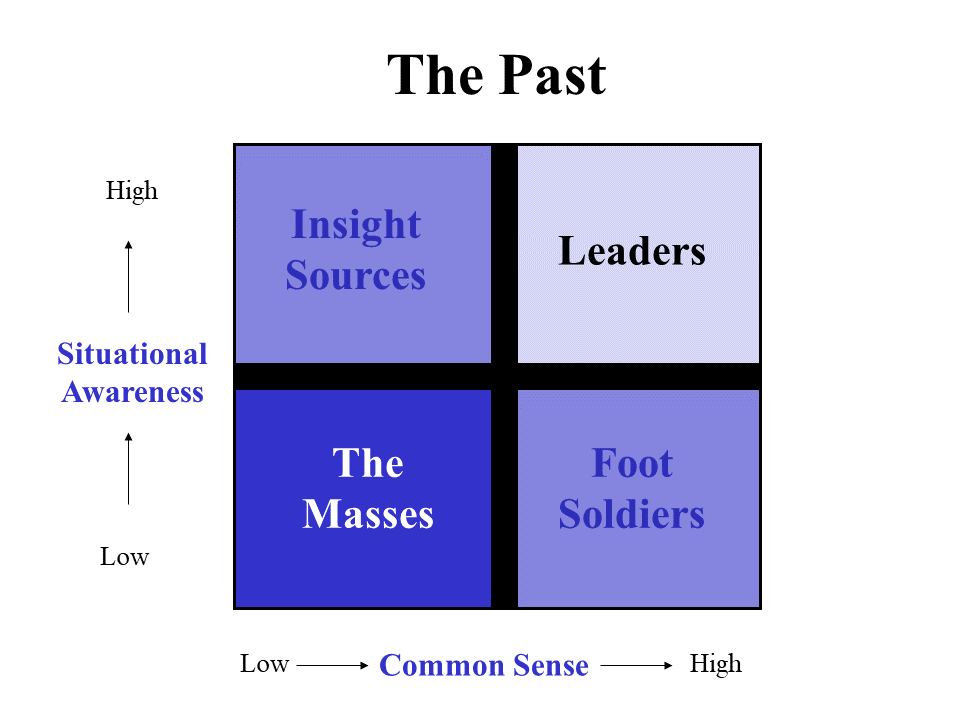 Next… I’ve got to quibble with my buddy just a little bit here. I think we need to think in terms of 200 years instead of just a century. 200 years ago, literally 95% of the world’s population lived at subsistence levels – in abject poverty. (Check this out for some data to back that up.) But, in fact… That’s just a detail. His concept is still right on the money.

200 years ago, anybody in that “Low Common Sense, “Low Situational Awareness” category really did either starve or get eaten by a bear!

Not only that, average life expectancy was only about 40 years. Extremely few individuals lived long enough to learn enough and/or experience enough to migrate from one quadrant to another. Wherever you started is pretty much where you stayed.

But today it’s different. WAY different. Advances in technology have made all of the knowledge ever discovered accessible to all of us with just a few keystrokes. New knowledge and new insights are shared globally literally at the speed of light.

With a single, short burst of effort, today’s exceedingly average individual is actually able to articulate something that is genuinely valuable.

To that, add our modern, fawning media that is forever vigilant for yet another celebrity to constantly, loudly and endlessly celebrate. Forget about the fact that our friend from “The Masses” was like the proverbial blind pig that stumbled across the acorn. Mr. or Ms. Nobody is now a mass-and-social-media-driven Mr. or Ms. Somebody, and the whole world is duped into craving his or her opinion about everything. 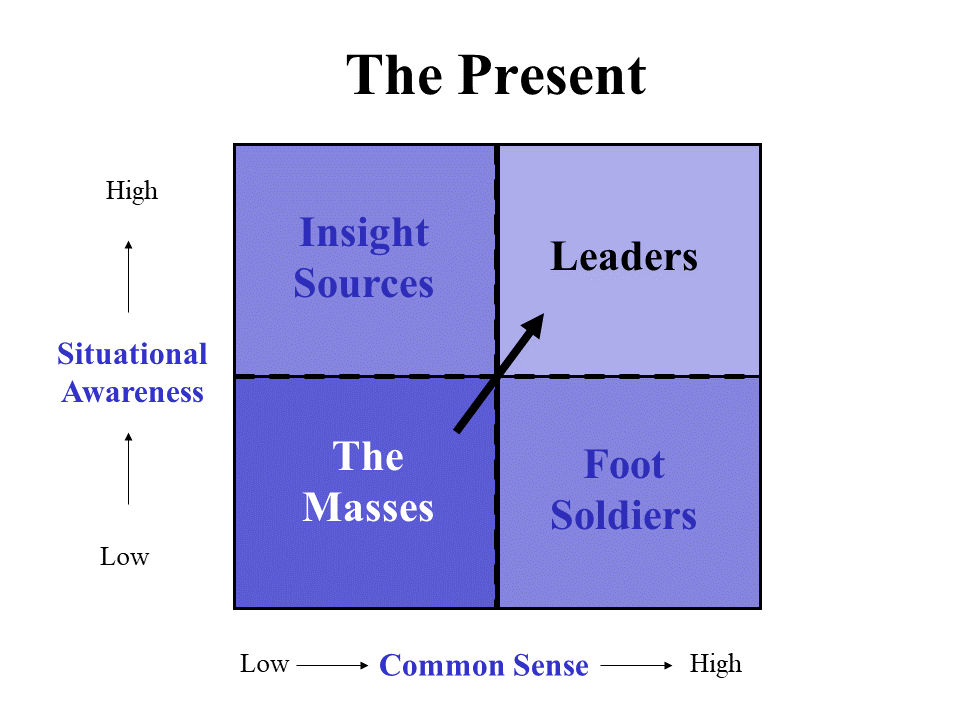 The internet not only enables this phenomenon, it perpetuates it. And that’s a big problem. Especially when you consider the last sentence from my buddy’s e-mail. As a reminder, here it is again, “They are growing in numbers and finding careers in politics.” To reiterate…

Technology and longevity are collaborating with the media to pull AND push Lots and LOTS of bodies that belong with the rest of the Low Common Sense, Low Situational Awareness Masses up into the Leadership ranks.

Because now… I’ll throw some gas on the fire.

Is it conceivable that a High Common Sense, High Situational Awareness individual or group might co-opt a Low Common Sense, Low Situational Awareness individual or group for its own purposes? The answer, obviously, is, “Yes!” In fact, it happens all the time. Also obviously, this co-opting at the group level has a dramatically greater – much scarier – impact.

Let’s dissect an example. Personally, I cannot imagine a better one than today’s Democrats and The Green New Deal. It’s brilliant! The co-opting strategy that is – not the Green New Deal itself.

The DNC is behind it. Every declared Democrat with a dream of living in the White House has enthusiastically endorsed it. Consider a few key questions:

The High/High few are co-opting the Low Common Sense, Low Situational Awareness many with this lovely little fairy tale.

Since I have now offended half my audience, I acknowledge the undoubted wisdom of working to decrease our dependence on fossil fuels. That goal makes all the sense in the world. To pursue it by torpedoing the entire world economy though, is stupendously dumb.

What happens in a country with massive oil reserves that quits drilling for and refining it? Have you heard about Venezuela? Where hospital generators are shutting down due to lack of fuel? Which shuts down critical equipment for things like neonatal care and dialysis? Hours that stretch into a day or more in line at the gas station? Transportation screeching to a halt as result? No food deliveries because of the disruption in transport? Stray dogs and cats for dinner anyone? That’s no joke!

So yes, by all means let’s stay focused on developing new and better and cleaner/greener energy sources. But let’s not blow up 2 centuries of the hard won and truly massive and astounding improvements in worldwide standards of living.

Let us also stay focused on the fact that smart politicians will exploit the daylights out of the Low Common Sense, Low Situational Awareness dumb masses for their own political gain – for their own personal lust for more votes, more power and more money. Let’s think!!! And see through the soaring, political rhetoric for what it truly is.