Should Government Grow Faster Than GDP? 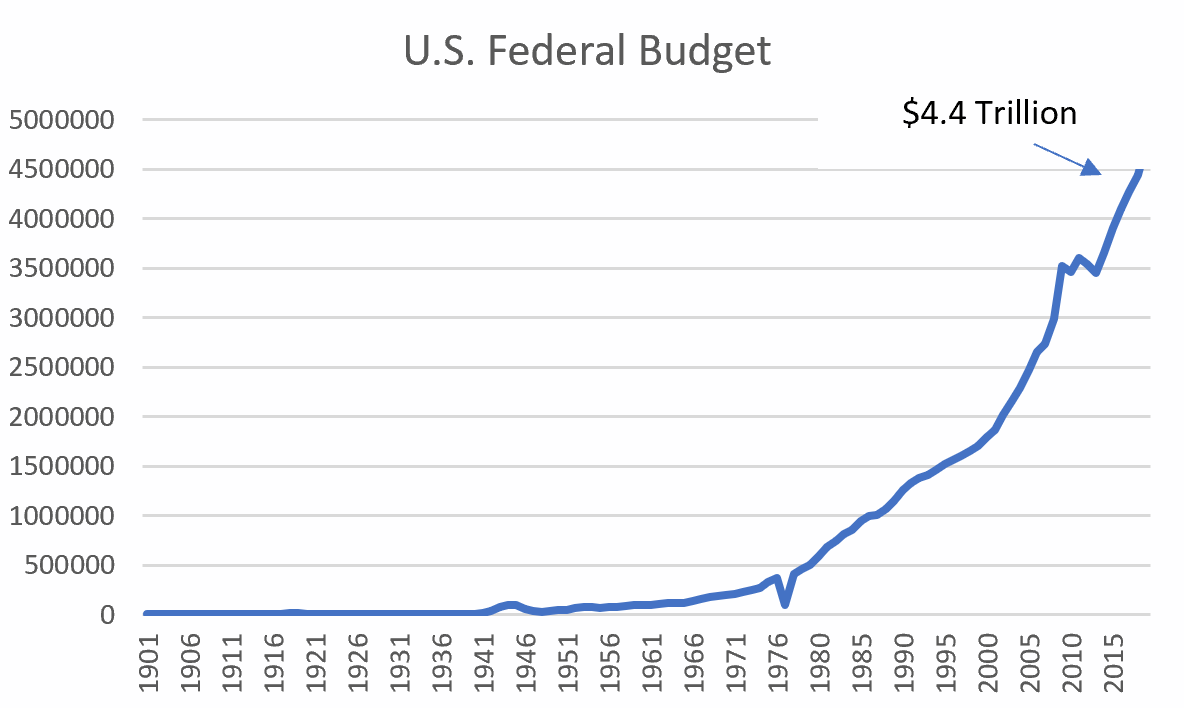 It’s no secret that in my book, the federal government is too big. I’ve said so in no uncertain terms in a goodly number of Internationally Vicarious episodes. Hard as it may be to believe though, not everyone agrees with me. I’ve actually gotten some pushback!

The most valid criticism so far is that I often use a graph of the federal budget that turns up sharply in the 80s and continues to climb even more steeply through today. I use it to say, “Fie on the Feds!” My more astute critics point out, however, that the graph does not account for inflation or population growth, and therefore grossly overstates both the budget growth and the rate of increase of that growth.

Fair enough. Point taken. In response, I’ll present additional data that does account for inflation and population growth, and then I’ll continue my anti-BIG-government rant with renewed enthusiasm.

The best data against my case that government is too big is the Federal Budget vs. Gross Domestic Product. Since I’m using the ratio of Budget to GDP, it doesn’t matter if the numbers are inflation-adjusted or not, as long as they’re both either adjusted or not adjusted. Also, since all working Americans contribute to GDP, population growth is also reflected in the ratio. More Americans working certainly means more GDP and therefore – maybe or maybe not – is justification for a bigger government budget. The key point is, this next set of data and graph account for both inflation and population growth. And what do they tell us? 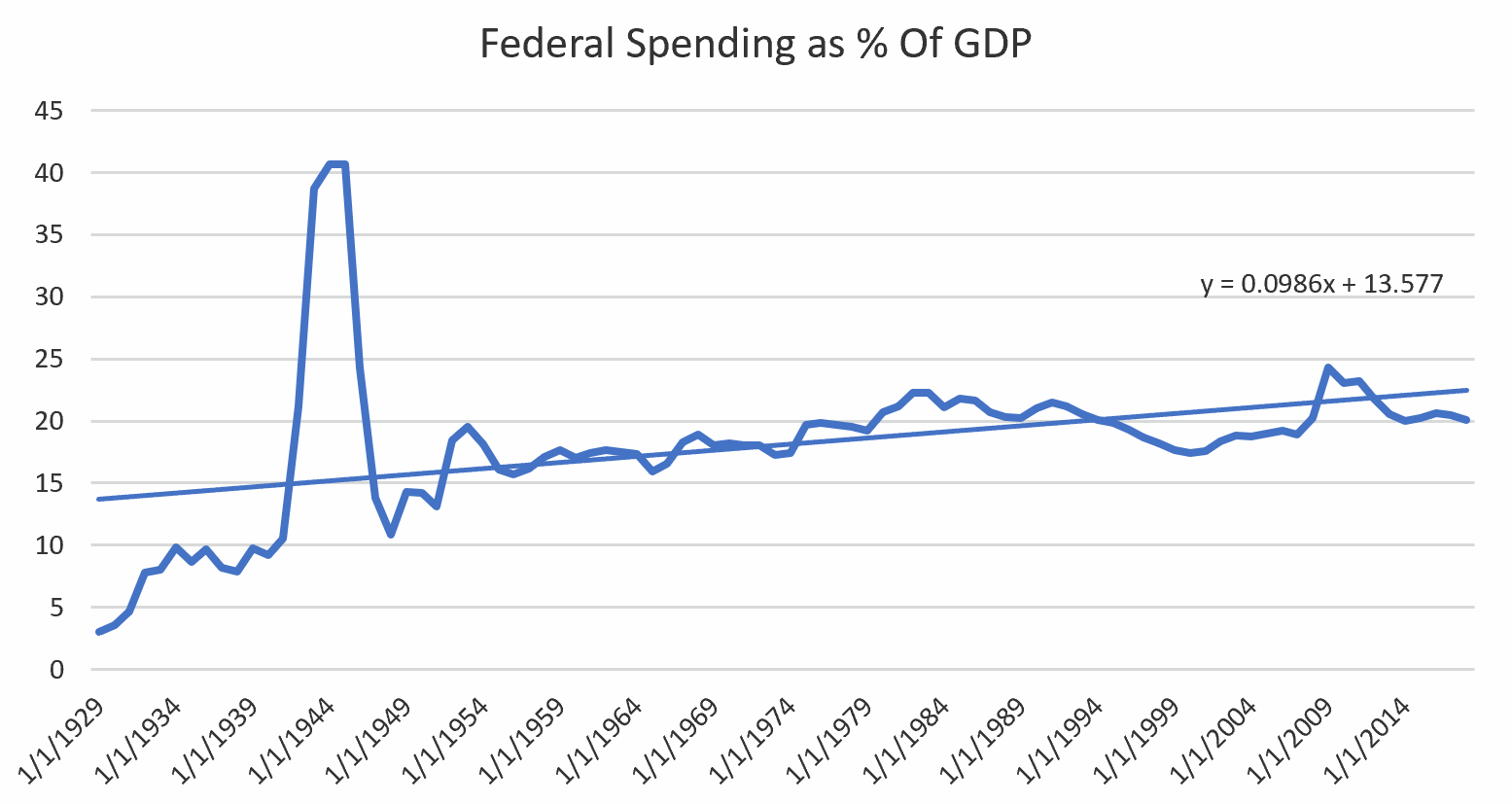 Well…  The federal budget has indeed grown at a faster rate than GDP, but I do the math and the line slopes up at only a 5.6° angle in the 89 years since 1929. That’s really not very much at all. Hmmmmmm…???

Just for grins and to remove the giant spending blip for World War II, I redid the calculations starting in 1953 – my birth year. 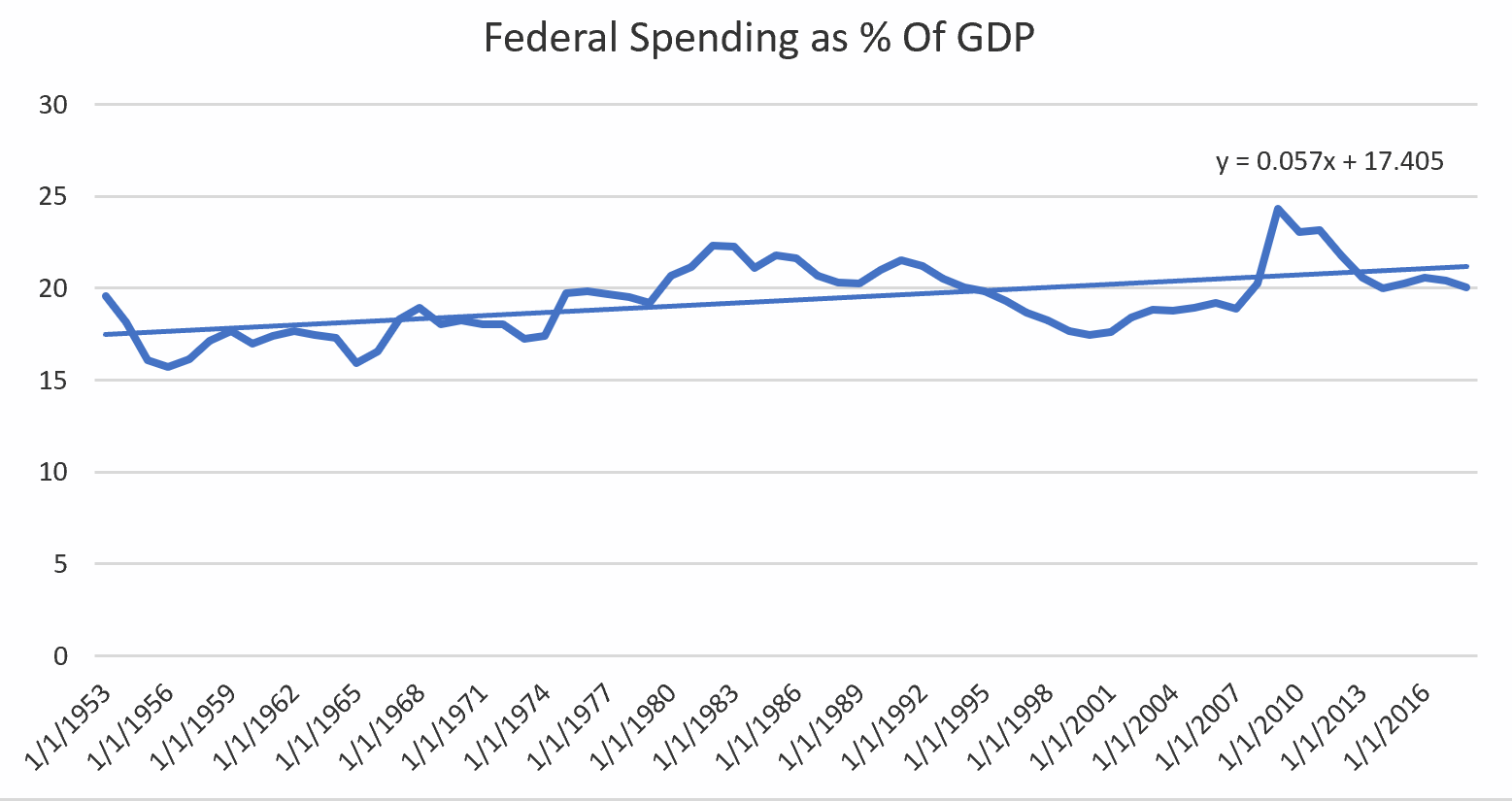 Pretty much the same story, but now the line slopes up at only a  3.7° angle. Even flatter! For the first few minutes of staring at these graphs, I was stunned by the apparent fiscal restraint on the part of Congress for that past 90 years. The Federal Budget to GDP ratio has held pretty steady at right around 19-20%. Have I gotten this whole “government is spending too much” thing wrong? Again, hmmmmmmm…???

No! Turns out I’m not wrong. Government IS spending too much.

For the rest of this episode, I’ll share some additional data to again prove my point, and also provide insight into how We The People – staunch fiscal conservatives included – pretty much insist that government not only spend more, but also to do so in as deceitful a way as possible. 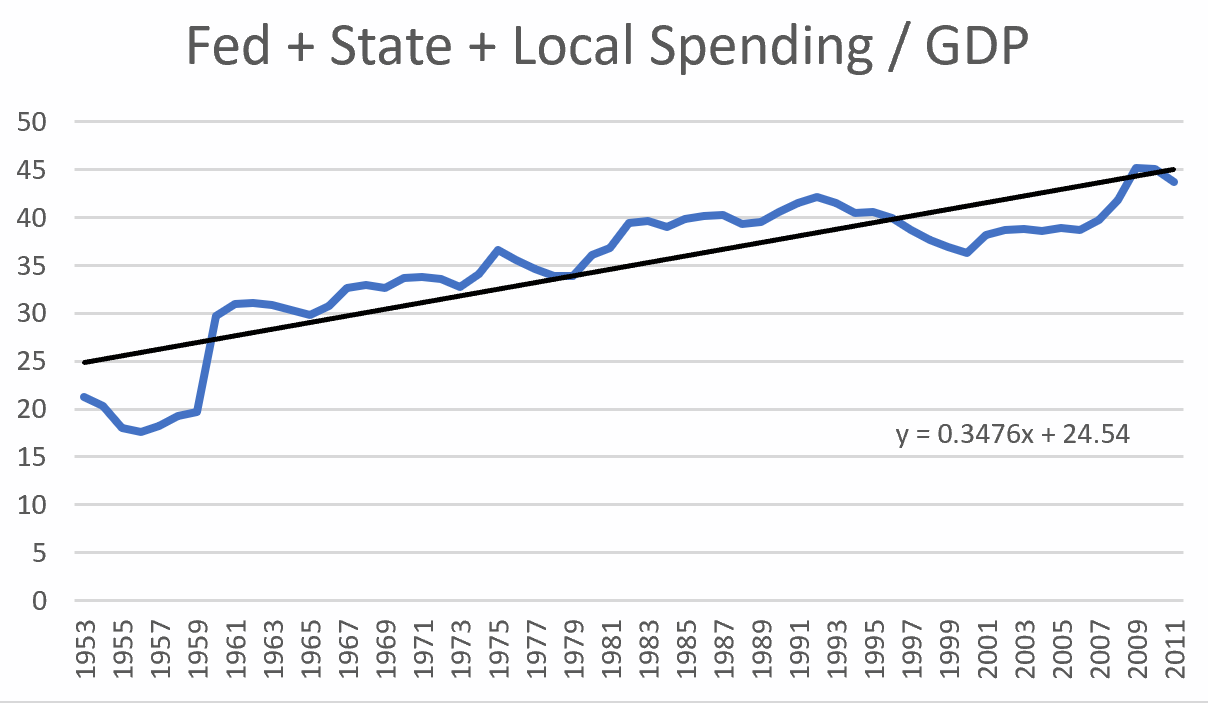 And things get way more interesting as we go farther back in time. Take a close look at the following graph that shows the total government spending to GDP ratio going back to 1880. 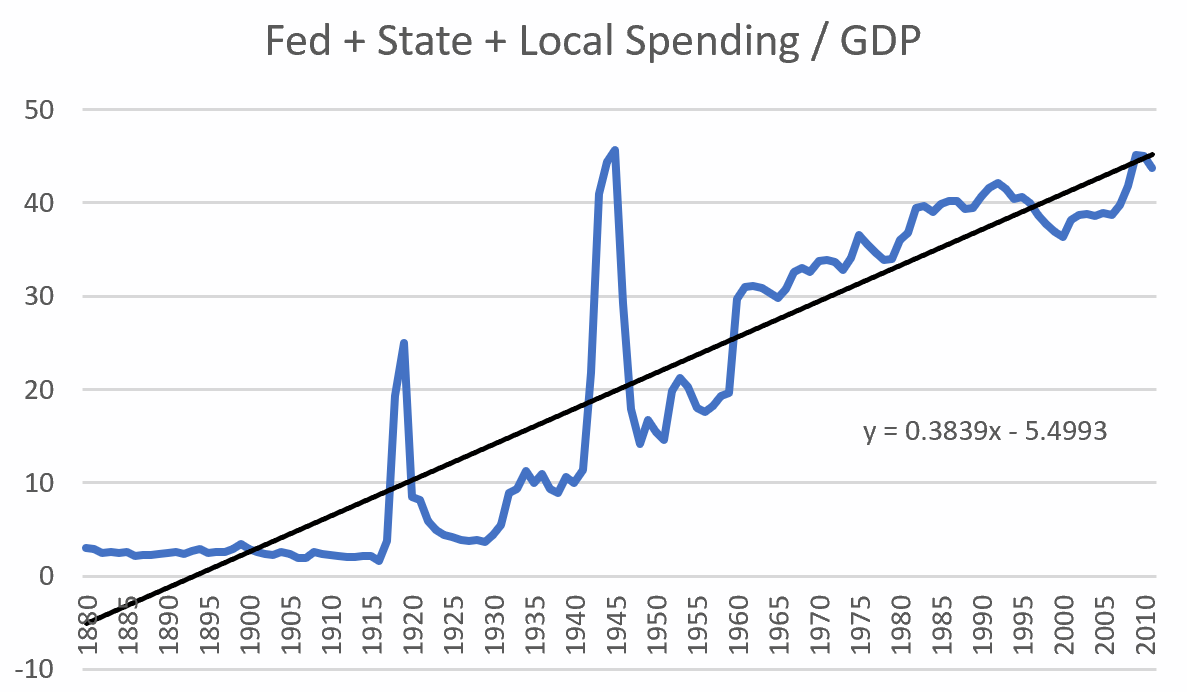 Back then, total government spending was about 3% of GDP, and it drifted downward to 1.6% by 1916. Then there’s a huge spike up to 25% during World War I. After that upward surge, spending almost got all the way back down – to 3.7% in 1929. Then the Depression set in, and it jumped back up to around 10% of GDP. And then, World War II kicked it up to 46%, and government growth and spending never looked back to its days of restraint. It got down to just over 14% in 1948, then began its relentless climb back up to today’s World War II levels.

The root cause of all this growth in government is remarkably simple. A legitimate crisis occurs and We The People demand that the government DO SOMETHING! So naturally, wanting to get re-elected, the politicians in government Do Something! Like they did during the Civil War by raising an army, waging war and imposing a 3% income tax. But We The People, being people after all, then made it clear that We – Don’t – Like – Paying – Any – More – Taxes!

The politicians made careful note of both the demand from the people to “DO something!” and their simultaneous desire to not pay for anything.

The root cause of all this growth in government is remarkably simple. A legitimate crisis occurs and We The People demand that the government DO SOMETHING! So naturally, wanting to get re-elected, the politicians in government Do Something! Like they did during the Civil War by raising an army, waging war and imposing a 3% income tax. But We The People, being people after all, then made it clear that We – Don’t – Like – Paying – Any – More – Taxes!

The politicians have made careful note of both the demand from the people to “DO something!” and their simultaneous desire to not pay for anything.

Looking back at the government spending to GDP graph again, it’s easy to see these contradictory forces in acton. The spending spikes due to WW I, the Depression and WW II are very clear. Sharply way up and sharply way down over a relatively short time span. The spike from the Vietnam War is less pronounced, yet visible. One needs to stare a little closer to see the impact of the Cold War, but it’s there.

There are two very important things to note here.

We The People generally didn’t recognize that relative spending never got back to what it was following each real, national crisis. There was so much relief and celebration of the end of the crisis, that we didn’t notice the increased government spending growth.

Not only that, the political class over the last century has relentlessly and continuously improved its ability to disguise tax increases. I’ll get into some of those tricks in next week’s episode. For now, let’s focus on how we have provided, and continue to provide, powerful incentives for politicians to spend more and to hide that fact from us with ever more clever maneuvers.

Like literally every group of human beings, politicians are constantly working to absorb more money and power into their own group. (By the way… If you want to think that you personally are constantly angling for more and different ways to acquire more cash to buy stuff and for more power to control all the crap life and everyone in it throws at you, ignore all this and get back to your fantasyland rainbows and unicorns.) Like me, like you, like everybody, politicians aid and abet their own kind. They respond to public demand for decisive, massive, instant action at little or no cost by doing two things:  taking decisive, massive, instant action and obscuring the costs as much as possible.

That thought too deserves repetition and reinforcement… Is it really fair for us to deride and condemn politicians for doing exactly what we insist they do? We demand action that costs nothing. That’s simply not possible. Politicians – like any and every other group of people – and I include by the way any and every other group of business people – respond to the demands of their market. In the case of politicians, that means delivering decisive, massive, instant action and obscuring the costs as much as possible. Again, it it really fair for us to derinde and condemn them for doing exactly what we demand of them?

Well, yeah, actually… We should and must deride and condemn politicians for the slightest lack of knowledge, honesty or transparency with regard to the costs of their actions.

We also must become and remain much more aware of our own contributions to all the political shenanigans due to our own lack of knowledge, honesty or transparency. We’re ALL guilty! We need to keep both ourselves and the politicians focused on these three things forever – knowledge, honesty and transparency. And just for the record, I think the greatest of these three things is knowledge – especially economic knowledge.

I’m your Intentionally Vicarious host Todd Youngblood. Retaining my belief that government is too big and growing too quickly. Still disdainful of ignorant, deceitful, obfuscating politicians. But with a bit more understanding that we the people provide powerful incentives for these flaws. And just in case you were wondering… In the face of all that, I’m still having more fun than anyone else I know.

If this episode got your brain working and/or your blood pumping, please tell all your friends and colleagues about it..