Crusaders for the adoption of some action or set of actions often address the big, daunting issues of the day in exceedingly ineffective ways. Prohibition, and Gun Control provide instructive examples of what can, does and might happen when unintended consequences are ignored.

The problem solving approach of many of these Crusaders is apallingly simple-minded. Their focus is to “make something – anything – happen” to create the illusion of progress.” Consideration of root causes and unintended consequences, while vital in crafting a robust solution, is perversely non-existent.

The blind spots of these crusaders – be they intentional or unintentional – need to be exposed. So let’s take a closer look at a few challenging questions to get that done.

Why Was The 18th Amendment for Prohibition Ratified?

The most prominent argument for Prohibition was the perception of the power of alcohol as a destructive force in families and marriages. Also, because of intense competition among saloons, many of them also offered gambling and prostitution. The addition of two more vices to the mix was seen to make booze that much more destructive.

Men squandered their paychecks on booze, gambling and prostitutes, then went home and physically abused their families. Wow! Talk about a compelling and emotionally powerful anti-booze argument!

Significantly, there was another less visible even more compelling factor. Self-interested politicians (in other words, virtually all of them) supported Prohibition for a totally different, unrelated set of reasons. There was a much more powerful and simultaneous movement for Women’s Suffrage. Women’s Suffrage was an extremely hot political potato at the time. Much, much hotter than Prohibition.

Since women were overwhelmingly in favor of Prohibition, a politician who opposed it was seen as obviously anti-woman. Politicians who wanted to get elected, and knew the inevitability of passage of the 19th Amendment for Suffrage, did not want to be seen as anti-woman. They supported passage of the 18th Amendment for Prohibition regardless of their own instincts and opinions. Winning the next election was far more important to them than considering the Unintended Consequences of Prohibition.

Given the repeal of Prohibition by the 21st Amendment in 1933, it is clear that it did not make sense. But why did it not make sense?

The answer is blindingly obvious. Remember the Crusaders I mentioned earlier? The Crusaders, aided and abetted by the politicians pandering to them, addressed an exceedingly complex issue with a exceedingly simple solution.

The problem was how to reduce the number of men who squandered their paychecks on booze, gambling and prostitutes, then went home and physically abused their families. That sort of behavior is caused by an enormously complex stew of biological, sociological and psychological factors. Things like physical disease, malnutrition, mental disease, poverty, a broken family in childhood, lack of moral role models, lack of education, the agony of life in the slums, poor socialization, unwholesome mass media, rejection by the community, negative peer group influence, and on and on and on….

Ta-Da!!! Pass the 18th Amendment in 1919. Make the production of alcohol illegal and all those other thorny issues evaporate into the night. It was a tremendous moral and political victory, and it felt great!

Ummmmm… But weren’t gambling and prostitution already illegal? And what about those unanticipated, unintended consequences?

The Crusaders for Prohibition thought the demand for booze would drop precipitously. Among social and moderate drinkers, it did. But they were never even a part of the problem in the first place. Statistics from the Roaring 20s are notoriously unreliable, but a review of the data that is available makes it is very clear that in many parts of the United States people drank more and more people drank.

The Crusaders neglected to consider that alcohol is extremely easy to produce. So we have a commodity that is in high demand, is easy to produce, but illegal to produce. So who produced it? Criminals were already making loads of money with gambling and prostitution – both of which were already illegal. Adding booze to their pre-existing illicit business model was a piece of cake! Al Capone, Lucky Luciano, Longie Zwillman, Frank Costello, Meyer Lansky and host of other gangsters made vast fortunes thanks to their new line of business handed to them courtesy of Prohibition. (And I won’t even get into the Prohibition-funded blight of even more organized crime and the subsequent rise of the Mafia.)

The Crusaders didn’t intend to turn literally millions of everyday Americans into criminals. As the 1920s progressed though, courtrooms and jails overflowed, and the legal system failed to keep up. Many defendants in prohibition cases waited over a year to be brought to trial. As the backlog of cases increased, the judicial system turned to the “plea bargain” to clear hundreds of cases at a time, making it common practice in American jurisprudence for the first time.

The Crusaders didn’t account for the endless creativity of we humans. Pharmacists were exempt from Prohibition law and were allowed to dispense whiskey by prescription for a laundry list of ailments, ranging from anxiety to influenza. The number of registered pharmacists in New York State, for example, tripled during the Prohibition era. Wine for religious purposes was also allowed. Enrollments rose at churches and synagogues, and cities saw a large increase in the number of self-professed ministers and rabbis who could obtain wine for their congregations.

The Crusaders didn’t realize that even though home stills were technically illegal, they could be purchased at many hardware stores. Instructions for distilling could be found in any public library – and I find this hilarious – in pamphlets issued by the U.S. Department of Agriculture! The law meant to stop Americans from drinking instead turned them into experts on how to make alcohol.

The Crusaders didn’t realize that while anybody could easily make alcohol, not all who tried were good at it! As the trade in illegal alcohol became more lucrative, the quality of alcohol on the black market declined. On average, 1,000 Americans died every year during Prohibition from the effects of drinking tainted liquor.

The Crusaders forgot to consider the huge drop in alcohol excise tax revenue collected by both the federal and all the state governments. Prohibition cost the federal government a total of $11 billion in lost tax revenue, while costing over $300 million to enforce. At the time, almost 75% of New York’s revenue was derived from liquor taxes. Thanks, Prohibition! You caused the Feds and States to get addicted to income tax revenue!

Why Are The Calls For Gun Control So Passionate?

The most straightforward and compelling fact in support of strict gun control is that in the U.S., 819 people have been killed in mass shootings in the last 36 years. Headlines and media tell the grim stories. “17 Children Killed in Parkland, FL School Shooting.” “58 Killed in Mass Shooting on the Las Vegas Strip.” And sadly, it goes on and on an on.

Another approximately 37,000 deaths every year are due to gun violence. These numbers are appalling. No sane person can argue with the notion that, “We must do something!”

It’s just like the days leading up to Prohibition, when too many husbands came home – after squandering their paychecks on booze, gambling and prostitutes – and physically abused their wives and children. In 1919, Congress did something.

The motivations of the Douglas High School, Las Vegas Strip, Orlando Nightclub, and other mass murderers were and are beyond my comprehension. Like the drunken, wife-beating husbands, that sort of deviant behavior is caused by an enormously complex stew of biological, sociological and psychological factors.

The same list of issues; things like physical disease, mental disease, poverty, the agony of life in the slums, etc. also apply to gun violence. How big a biological, sociological and psychological difference is there between the guy who  drinks, whores, gambles and abuses his family and the same sort of guy who pulls a gun and shoots somebody?

What if the simple-minded, magical solution of banning “assault rifles” or high capacity magazines or handguns or whatever is as ineffective – as counterproductive – as banning alcohol? What if – like the moderate drinkers of the 1920s – only those who are not part of the problem comply with some new gun restrictions?

Can the Gun Crusaders decrease the demand for guns? No. Sales of AR-15 style rifles spiked during the 2017 presidential election campaign when it appeared that a pro gun control candidate would win and ban them.

Can the Gun Crusaders eliminate production of guns? The machine tools needed to roll, stamp and mill steel to make a gun are readily available by the hundreds of millions anywhere and everywhere in the world. The knowledge of how to manufacture a gun is out there. It’s not going to be erased. Ever hear of additive manufacturing? Do a little googling. The equipment, software and designs to print guns are all widely available. The cost to do so is plummeting and the quality of printed guns is soaring.

Anyone who thinks the criminal element would be reluctant to move into gun manufacturing BIG-time is not what you’d call the brightest crayon in the box. Anyone who thinks creative minds won’t find loopholes and get around any conceivable gun control law legally is equally mentally challenged.

I won’t belabor the point. Banning “assault rifles” or high capacity magazines or handguns or whatever simply will not work. It would almost certainly produce results exactly akin to the Prohibition of alcohol. Remember what happened? The core problem would get even worse, huge numbers of law-abiding citizens would be transformed into criminals, a gigantic new profit stream for organized crime would be created, and only God knows what new and additional problems would be created.

Thinking that a simple solution to an enormously complex problem is possible, is incredibly short sighted and horribly, tragically misguided. 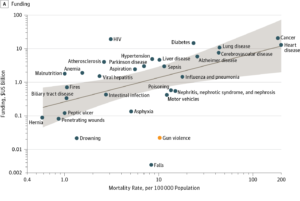 I dearly wish I had a comprehensive answer as to exactly what to do to reduce firearm suicides and homicides. That said, I strongly back three initiatives:

Gun violence IS a solvable problem, but it’s not one that can be addressed by a simple solution.. Let’s make sure we attack this very complex problem with a solution that is robust enough to solve it.