From Pluto Platter… To Frisbee… To Ultimate Disc 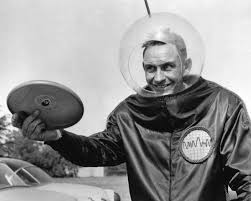 Thanks for the Pluto Platter Picture, Wikipedia!

Ever heard of the Pluto Platter? If so, you’re almost certainly an Ultimate geek. That would be the sport of Ultimate, also informally called Ultimate Frisbee. The Pluto Platter was designed in 1955 by Fred and Lu Morrison and is the archetype of all modern flying discs. They sold it to Wham-O in 1957 and the things have been entertaining kids through geezers ever since.

Today, as my podcast guest, volunteer food pantry manager, church nursery school treasurer, quasi-relative, Moorestown (NJ) Pickup Ultimate League Commissioner, Dan Proulx informed me, the proper terminology is “disc.” His league is very snobbish about discs. As Dan puts it, “Frisbees are toys, and you need a disc to play Ultimate.” (Sorry about that, Wham-O, but you did it to yourself with all your copyright insistence!) There’s a whole laundry lists of approved “official” discs of different sizes, weights and weight distribution. Who knew how extensively the Pluto Platter would evolve?

So how does game work? 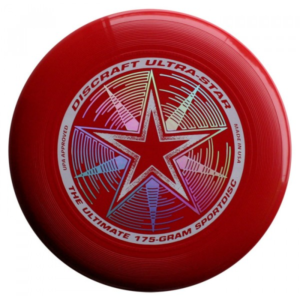 An Ultimate (Frisbee) field is 40 yards wide and 120 yards long. (For pickup games, almost any size will work as long as both sides of the field are equal.) Each end zone is 25 yards deep and the playing area is 70 yards. The game begins with a “pull” that is similar to a football kickoff. The 7-person teams line up on opposite ends of the field and one player throws the disc as far as possible. After that the flow of the game is more akin to soccer or basketball with players passing the disc back and forth among teammates in an attempt to “ultimately” progress into the end zone.

There’s no running with the disc. (That’s one of a basketball-ish components of the game…) A point gets scored when a player catches a disc in the end zone. Then, another pull and the process is repeated.

Is Ultimate a serious sport?

Yes! Dan’s league is more on the “pure fun” end of the scale. It reflects the fact that anyone of any age or ability level can enjoy it. That includes, by the way, professional athletes like Nick Foles, the backup quarterback who led the Philadelphia Eagles to a Super Bowl win this year. They love it for the off-season conditioning it provides. That’s due to the soccer-like “never-stop-running-for-the-whole-game.

And yes, there is a pro league – or at least it’s semi-pro – called the AUDL or American Ultimate Disc League. It’s got 24 teams and a 16 week season. The past season’s championship game had 2,100 fans, so it’s not what you’d call huge …yet…

At the college level, it gets really intense. Check out the website of USA Ultimate, the sport’s official governing body – particularly the College Championships section. It’s not an official NCAA sport as yet, but this past November, Vermont became the first state to approve Ultimate as a high school varsity sport. It’s likely only a matter of time …or not. Many aficionados think the “stuffy old codgers” at the NCAA just will never accept the tradition of “No referees!” Today’s college-level Ultimate is totally player officiated. Which brings me to:

The Spirit of The Game™

In a nutshell, the Spirit of The Game™ is laid-back-chill. Frankly though, that phrase really doesn’t cover it. USA Ultimate ticks through a 10-item list that I find truly outstanding and downright inspiring. The sort of philosophy that should be adopted by all amateur sports. They even have a provision for “good-natured heckling.” (vs. taunting) How can you not love a sport that encourages “good-natured heckling?”

Want to find a pick-up game to launch your Ultimate adventure?

Check out the Pickup Ultimate web site. It blew me away! Seriously… They’ve got a global map loaded up with opportunities. Dan’s Moorestown Pickup league is there, along with a link to the Google Group he uses for scheduling and communication. There’s 110 or so folks in that bunch, and 20 or so of them play every week.

Go nowhere without a disc!