How the NFL Scams the IRS

…and state & local governments & all of us too! 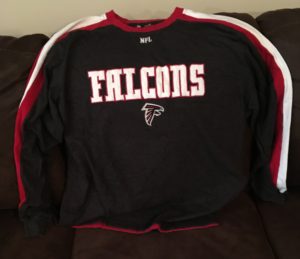 I VOLUNTARILY bought this shirt

Yes, the NFL scams the IRS. More accurately speaking, it’s NFL team owners. They’re the ones who ultimately get the cash. And it’s not limited to just the NFL. It’s also owners of professional baseball, basketball, hockey, etc. teams that build or renovate one of their palace-like stadiums. So where does the IRS get the money to fund these generous gifts to these billionaires? You got it… It’s us; Mr. and Ms. USA Taxpayer.

These guys also “work closely with” city and state governments to create additional rivers of cash – again, sourced by we citizens – that empty into the same pools of their own wealth.

All in the name of Economic Stimulus & Development for the Local Community!

All American Taxpayers IN-VOLUNTARILY paid for 60% of this…

Sorry to be the bearer of bad news, but the business case for the economic stimulus and development that a new professional sports stadium (or the renovation of an existing one) brings to a community is total bullshit.

Just to be clear. I’m not some anit-sports guy. Quite the opposite. I like all kinds of different sports and have been die-hard football fan for as long as I can remember. I clearly recall the thrill of becoming a member of the 80 pound weight limit Quakertown Dutchmen Midget Football team at age 10. And the thrill and pure fun of playing for the next 12 years on the bigger kids’ teams, then in high school and for my four years of college.

I was an Atlanta Falcons season ticket holder for 23 seasons. Then they built a new stadium. They wanted to me to pay a PSL or Personal Seat License of $45,000 for each of my two seats. Wanted me to be OK with a 170% per game ticket price increase. Could NOT understand why I told them to stick their season tickets where the sun don’t shine.

I felt like the Atlanta Falcons were trying to extort money from me.

I’d always been aware that the NFL is a business. The owners are in it to make money. I’m cool with that. But $90K up front plus $13,860 every season? From my pocket? To billionaire Arthur Blank’s pocket? Struck me as being just a tad excessive. So I started doing some research to learn a bit more about how the NFL makes money.

Oh… One more point before I get into that. I’m a die-hard when it comes to being a capitalist too. Getting individuals to pay for tickets and team hats, T-shirts and jerseys is one thing. Ditto for companies that buy TV and in-stadium advertising. They all doing so knowingly and voluntarily. Sucking money from the public till, however, is an entirely different matter. And it really ticks me off not only because it’s deceitful, but also because the whole scam – yes, S-C-A-M scam – is based on a phony baloney premise!

So here’s a quick lesson on how professional sports team owners screw the public to make some really serious money for themselves:

Get a Federal Tax Subsidy

What they do is really quite clever and takes some effort to follow, so stick with me here. I’ll use the Atlanta Falcons as an example. After the Falcons sold their pie-in-the-sky stadium scam to the city, Atlanta issued $200M in municipal bonds. It made more sense to Arthur Blank, the Falcons owner, to have the city of Atlanta issue the bonds instead of issuing them himself. Why, you ask?

Because investors would actually have to pony up all $200M if Arthur sold them himself. Since Atlanta is a city, it can issue municipal bonds that are tax free. In other words, the investors only have to pony up about 65% of the $200M, since they get a federal tax deduction – a subsidy – from the IRS for the other 35%. That’s $70 Million!!!

So to summarize… The investors put up $130M. The Federal government, via the IRS, puts up $70M. The City of Atlanta is on the hook to pay back the $200M plus interest. The Atlanta Falcons get $200M worth of their new stadium paid for.

Let’s take one more look at the $70M the IRS threw into the kitty. Where’d they get the money? The answer is, from the American taxpayers. All of us. Across the entire country. Including those who hate football and those who have never even heard of football. The United States Congress has seen fit to pick up part of Arthur Blank’s tab for his fancy new stadium. Arthur, by the way has a net worth of $3.9 BILLION. Poor baby. He obviously deserves and needs a handout from the federal government.

It’s outrageous! And it gets worse. Let’s take a look at the next part of the scam.

Get your city and/or state government to tax its citizens, and better yet out-of-town visitors, and then pass some of that cash on to you.

So now let’s look at what the geniuses in Atlanta City Hall cooked up. Fundamentally, it’s a “let’s grab some extra cash from visitors to our fair city” strategy. They tacked an additional 7% tax on every hotel and motel room rented. Yay! Free money from strangers! What a great idea!

But “oh no!” point out the Falcons. We’ve put the city on the hook to pay back all $200M plus interest. We Falcons don’t want the good citizens of Atlanta to be saddled with the risk of that tax not being enough. It would kill the city’s bond rating. Because we love our hometown so much, say the Falcons, we’ll assume that liability. We’ll just need to get a little piece of that new tax money you’re collecting. How does 39.3% of it sound to you? “That sounds just peachy,” says the mayor.

So the Falcons get 39.3% of that 7% surtax. That’s 2 3/4 cents for every single hotel dollar spent. The net effect is the Atlanta Falcons – a privately owned company – collect a 2.75% tax on every hotel room in the city. And how much will that amount to? How about $700M? I’m serious. That’s the official projection.

Very nice. A private company collecting taxes in cahoots with a city government. Can it get any more outrageous? Yes it can!

What about parking? Where are we going to put all the cars so our fans have just a short walk to the stadium and a place tailgate before and after the games? That’s going to take another $40M! Well now… Can a governor NOT get into the give-away-money-on-behalf-of-a-private-company act when the mayor is showing such largesse? Of course not.

And Arthur Blank and the Falcons say, “Thanks for the $40 mil gov!”

But it’s OK. The public’s investment will all come back in the form of economic development, income growth and job creation, right? Ummmmmm… Remember point 3?

The The Brookings Institution, arguably the most respected public policy think tank in the world has this to say:

“Despite the fact that new stadiums are often thought to boost local economic growth and job creation, these benefits are often overstated.  Academic studies typically find no discernible positive relationship between sports facility construction and economic development. Most evidence suggests that sports subsidies cannot be justified on the grounds of local economic development, income growth, or job creation. In fact, after twenty years of academic research on the topic, ‘peer reviewed economics journals contain almost no evidence,’ that sports stadiums or franchises measurably improve local economies.”

And then there’s the Initiative on Global Markets run by the University of Chicago’s Booth School of Business. They posed a question to their US Economic Experts Panel. Is it true that stadiums cost taxpayers more than any local economic benefits that are generated?

Another study found that a new stadium had no discernible impact on economic development in 27 of 30 metropolitan areas …and had a negative impact in the other three areas!

Thinking back just now to my story about the Atlanta Falcons’ new stadium, I’m stunned at just how gullible the City of Atlanta and State of Georgia politicians are for falling for such fraud. And how dumb we voting taxpayers are for electing these fiscal and economic boobs.

Here’s what we allowed billionaire NFL team owner Arthur Blank to do:

That’s $940 Million. Let’s just call it an even $1 Billion because I’m dead certain there are more scams and kickbacks that I didn’t find. Taxpayers shelled out more than 60% of the cost of building what is essentially Arthur Blank’s monument to himself.

At least we’re not St. Louis. The taxpayers there are still shelling out $6 million a year to pay for the monstrosity they built for the Rams who moved to Los Angeles in 2016!

I hope you’re as angry and disgusted as I am. And that you’ll forward this episode to ANYONE you know who lives in a city that can’t wait to take your hard-earned money and give it to some billionaire professional sports team owner.

I’m your host Todd Youngblood, and I guess I feel a little bit better now that I’ve gotten all that off my chest. Actually no… the whole scam still really ticks me off. I need to get out of here, get outside, get on my bike and resume having more fun than anyone else I know.

…as if I weren’t already ticked off enough: