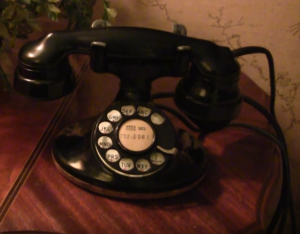 An example of the leading technology at the time the law governing Net Neutrality was passed. (Seriously! It was 1934!)

This whole Net Neutrality furor has been giving me a headache ever since it emerged as a “thing” in 2014. I spent a substantial portion of my business career smack in the middle of the whole telecommunications explosion, and it’s been frustrating to be so confused about it. So I decided to do some research and gain a deeper understanding of the related issues. My overall conclusion?

The first widespread use of the term started in 2005 during the Bush Administration. At that time the Republican FCC Chair endorsed adoption of policies and rules establishing principles of “network neutrality” in order to carry out the policy of the United States “to preserve the vibrant and competitive free market that presently exists for the Internet” and “to promote the continued development of the Internet.” In other words, the FCC committed to talking a good game.

In 2014 during the Obama administration, the FCC formally classified broadband internet service providers (ISPs) as providing “information services,” governed by Title I of the Communications Act of 1934, rather than “common carrier services,” governed by Title II of the Act. That distinction is important since Title I does not establish “net neutrality,” while Title II does.

The following year, the FCC – with the exact same Democrat as FCC Chair – said that ISPs are actually providers of “telecommunications services.” That means they are “common carriers” and are regulated under Title II.

With me so far?

The Republicans – with very cool rhetoric in 2005 – promised to make net neutrality a reality complete with a cherry on top. Then the Democrats in 2014 said, nah… those ISPs are just doing Title I computer stuff that doesn’t need tight regulation. Then in 2015, the Democrats said, just kidding, net neutrality is vital, so Title II regulation is also vital. Ummm… …except of course for 700 or so of the Title II provisions on which we’ll exercise “forbearance,” that is, ignore them.

Not to be outdone in confusing the issue even further, in 2017 President Trump’s FCC Chair, in the name of “restoring internet freedom,” repealed Obama’s 2015 Title II related policies. And remember now that the law underlying all this is the Communications Act of 1934! That’s the Roosevelt administration that I’m sure included folks with a deep understanding of the relevant technical issues.

At this point, I need to take a quick detour to address the Congressional Review Act of 1996. It was crafted by Republicans as part of Newt Gingrich’s Contract with America and signed into law by Bill Clinton. Wow! Republicans and Democrats in agreement! How refreshing! Well, maybe not. The CRA allows lawmakers to block an action taken by a federal agency with a simple majority vote in the House and Senate and the president’s approval.

It means, for example, that the Trump administration can undo anything done by any federal agency (like the FCC) under the Obama administration. The GOP and Trump LOVE doing this, and it’s exactly what they used to dump those Title II regulations among other items that are part of the Obama legacy.

So… in the bipartisan spirit of tit for tat, the Democrats in the Senate recruited 3 Republicans and using that same Congressional Review Act, voted to overturn the overturning of the net neutrality regulations. It’s all theatre though. It’ll never get passed by the House and certainly won’t get signed by Trump.

Meanwhile out in the business world…

Without net neutrality, an ISP could charge an information service provider like Netflix or a user like me extra to not block or throttle traffic or charge a premium for higher priority. With net neutrality the ISP could not charge extra. Net neutrality means more money for the information services providers and less money for the ISPs. No net neutrality means the money flows in the opposite direction. And what about we individual users? Face facts, we don’t control enough of the money to get a service provider, an ISP, a politician or a federal government official to give a damn.

So we have all this wailing and gnashing of teeth over how to solve a non-existent problem. Nice…

Now that I understand what all the hype is about, I can ignore net neutrality as a meaningful issue and focus on the sheer joy and fun of what the internet delivers to me.