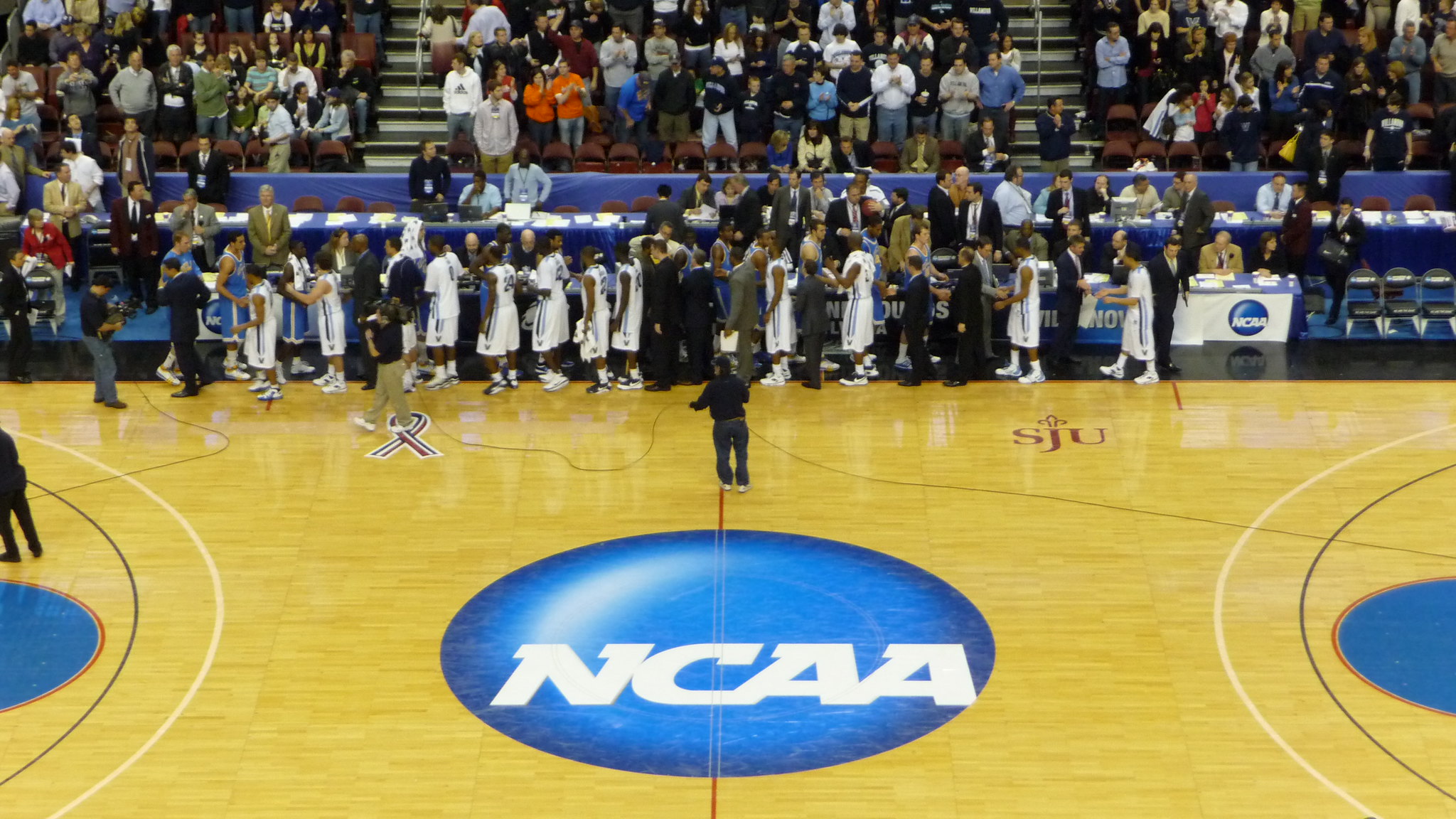 I make no secret about the fact that I’m a died-in-the-wool capitalist. Capitalism is an economic system that has lifted more people out of poverty than any other, and continues to relentlessly increase global standards of living. Not that I’m blind to capitalism’s many flaws. To paraphrase Winston Churchill, capitalism is the worst possible economic framework, except for all the others.

With that preamble, I want to talk about an example of capitalism run amok. Doing so will demonstrate that – bizarrely enough – my thinking is aligned with the likes of left-wing Governor of California, Gavin Newsom and self-proclaimed socialist Bernie Sanders; and will involve:

Before I get into the mud-slinging, I will acknowledge the indisputable fact that the NCAA has provided tremendously valuable services to and opportunities for tens of thousands of college-level athletes since its inception in 1906, and it continues to do so. Most notably, it has created and maintained a framework for level-playing-field competition and coordinated efforts to provide funding for everything from the hugely popular sports like football and basketball, to the more obscure like bowling, paintball and bass fishing.

I personally benefited from their work during my four years as a decidedly mediocre Division I college football player. I add that note to assure you all that not only am I a hard-core capitalist, I’m also an avid sports fan; not somebody just out to bash sports as a distraction from the academic mission of our colleges and universities.

At the time, I was pretty much oblivious to what the NCAA did, and it was also before the really big money started flowing through collegiate sports. And, oh boy, is the money flowing. Enough money to totally blow up the notion of the purity of amateur athletes competing in collegiate sports with their focus on school spirit, teamwork and character-building. They say that sacred cows make the best burgers, so let’s follow the money and see if we get some ground beef.

The NCAA has revenue of over $1.1 Billion annually.

The NCAA brings in more than a billion dollars in revenue? Holy shenanigans! That much money brings a whole lot of power along with it, not to mention a whole horde of people chasing that power and trying to get a piece of all that cash.

When you start poking around a bit though, it turns out that while the NCAA is clearly the face of collegiate sports – the front man if you will – they are NOT the dominant player. They are, in fact, just the front man; primarily responsible to keep us focused on the purity and wonder of collegiate athletics and unaware of and un-troubled about the massive amount of money and power sloshing around in that world.

The NCAA is merely the marketing arm and smoke-screen generator for a gigantic, semi-socialist money-making machine.

Let’s look at just one team – my adopted hometown team – the University of Georgia Bulldogs for example. Their athletic department raked in $177 Million last year. For perspective. That’s more than 5 times bigger than what the U.S. Small Business Administration considers a small business to be. So a publicly-owned and operated non-profit university operates a hugely profitable side business? A side business that earns 500% too much money to be considered “small” by the federal government? Yup! For the record, there are 76 additional public university athletic departments that are too large to be considered a small business.

Curious about the combined total revenue for all the individual NCAA athletic departments? Try $11 Billion on for size.

But, you might argue, the athletic department helps cover costs for all students doesn’t it? Well… Only 23 public colleges and universities have financially self-sufficient athletic programs, and the accounting used by some of those is, let’s say… just a tad questionable. The real number is smaller. And even if it were 23 – and they all kicked back some cash to their school which they don’t – that’s only 23 out of 1,101 NCAA programs that even have a chance at helping to pay other bills. Bottom line, at over 1,100 schools, all the students – all – pay some combination of higher tuition, fees or sur-charges to cover the athletic department.

Then there are the Conferences. Georgia is part of the Southeastern Conference. How much revenue does the SEC generate? How about $660M? Let’s take a look at the rest of the so-called “Power 5” conferences within the NCAA? Here you go in dollar-vacuuming order:

That’s a total of $2.7 Billion in annual revenue for the Power 5 NCAA conferences.

The media deals that drive a significant chuck of all that are amazing. The Big Ten has a six-year, $2.64 billion deal with ESPN and Fox Sports. The SEC Network is valued at $4.7 billion. The ACC has a similar deal for itself. I could go on, and on, and on, but I’ve made my point.

Big time college sports are NOT about the character-building purity of amateurs competing for glory.

Now let’s turn to the absolutely stunning hypocrisy of these capitalist titans, their love affair with and undying support of socialism, and how the NCAA has been co-opted into enabling it all.

Let’s start with the $3.9 Million the NCAA President makes; and the $1.7 Million it’s EVP makes; and the more than $450K each that 9 additional NCAA execs make. The lowest paid commissioner of the Power 5 Conferences makes $1.9 Million. Nick Saban, football coach for the University of Alabama makes $8.7 Million. You get the picture. Do you think any of these guys wants to rock the boat? Can’t let those athletes be capitalists now can we? Socialism will be just fine for them!

So meanwhile, a football player for Ohio State just got suspended for accepting a small loan to help cover basic living expenses from a family friend which he paid back within a year. Sell an autograph – suspension. Sell a t-shirt with your picture on it – suspension. Make a freaking nickel for doing anything remotely connected to your athletic skill – suspension.

This is the NCAA’s virtuous pursuit of the preservation of the nobility of ametuer athletic competition? Ensuring the purity of the student athletes by ensuring they are all treated equally with one another and all the non-athlete students? I call Bullshit!!!

This is the NCAA throwing up a smoke screen for its own execs; the muckety mucks running the conferences; the multi-million dollar coaches; the execs of the construction companies who build stadiums, elaborate gymnasiums and ostentatious sports dormitories; and all the hoards of other business people selling tickets, endorsements, shoes, t-shirts, jerseys, food, booze, tailgate supplies and all manner of other products and services.

So make no mistake… The kids who do the actual work of putting on the shows – all these collegiate sporting events that generate more than $15 Billion every year – are maybe compensated with tuition, room and board. They are given what they need to keep that $15 Billion flowing. The NCAA – under the thumb of the titans of the collegiate sports industry – judiciously and relentlessly ensures the athletes get what the NCAA says is what they need, and not one penny more.

“But,” you say, “the NCAA just made a new pronouncement about enabling college athletes to “benefit” from the use of their “name, image and likeness.” Well, that pronouncement is profoundly disingenuous. It’s a totally and utterly empty rule change. The NCAA says that it’s now perfectly fine to “benefit” from selling your autograph or poster of yourself or endorsing some product. Well, what the hell does “benefit” mean? Is it cash? Or is it a hearty handshake and a hand-written thank you note? Get this… Everything a college athlete does, the NCAA continues, must be done “in a manner consistent with the collegiate model.” The power to decide what is or is not “consistent with the collegiate model” is totally outside the NCAA’s control. It lies with the individual schools and conferences who are not about to share their gravy train.

The NCAA’s announcement also stipulated – down in the fine print – that any changes made by any individual school should “make clear that compensation for athletics performance or participation is impermissible.” Seriously??? Those SOBs expect us to actually swallow their shameless propaganda?

And, no, my rant is not over! Because whenever I think hypocrite, I think politician. You think the politicians are going to miss out on this massive, Marxist gravy train? No way!

Remember Trump’s tax bill of 2017? The one all the Republicans loved and all the Democrats hated? Put aside your partisan and taxation philosophies for a minute and focus in on just Section 4960 of The Tax Cuts and Jobs Act of 2017. It’s entitled “Excise Tax on Excess Tax Exempt Organization Executive Compensation.”

I’m your Intentionally Vicarious host Todd Youngblood – Genuinely disgusted by the colossal hypocrisy of the NCAA, the Collegiate Athletic Conferences, College and University Trustees, presidents and leadership, capitalists who channel Karl Marx when it’s to their own benefit, and of course the politicians who, as usual, found a way to get a piece of the action. I hope this episode got you ticked off and disgusted too, because that’s yet another thing that helps me  have more fun than anyone else I know.