I’ve never been a proponent of term limits for Congress. While I doubt any of the Founding Fathers actually used the phrase, “Vote the bums out,” they did indeed write the constitution so that we the people can vote any given bum out in any given election. In other words, we already have term limits; they’re called elections.

That said, as I watch Congress growing ever more dysfunctional, I believe the time to implement term limits is upon us.

I’ll first discuss proof that Congress – and more importantly, the people in Congress – are indeed growing ever more dysfunctional. I doubt I’ll get much disagreement on that point… Then I’ll take a look at the strongest arguments against term limits. Then I’ll conclude with an outline for a proposed 28th Amendment to the Constitution that can reduce dysfunction, compensate for the very real down-side of term limits and make each member of Congress more accountable to his or her constituents.

Let’s first consider how the Framers of the Constitution envisioned Congress, and in fact the way we all want it to be. It should be grounded in the notion of service. Serving in Congress was designed and meant to be a personal sacrifice on behalf of one’s fellow citizens. A “citizen legislator” agrees to set aside personal career and self-interest for a relatively short period of time, execute the duties of office to the best of his or her ability and then return to private life.

Let’s take that definition and think about the characteristics of a “citizen legislator.”

It would certainly take an ambitious individual, determined to make a mark in his or her own chosen non-political business or profession. Intelligence, integrity and pragmatism would obviously be essential. This individual would also need to be highly respected by peers, including an expectation of success in changing federal government for the better.

How much evidence of “citizen legislators” do you see running around Washington, DC?

I don’t see much. I do see members of Congress spending half or even more than two-thirds of their time doing fundraising. And why would they do that? To get re-elected, of course. Would a legitimate citizen legislator spend half or more of every day working to get re-elected? I don’t think so.

I do see an appalling lack of lofty, compelling goals and objectives. That means there’s also an appalling lack of coherent strategies and tactics for action. With 435 House members and another 100 in the Senate how can there possibly be only two sets of goals, objectives, strategies and tactics? Shouldn’t there be more like 535 sets? Or at least a 100 or so?

But, no. There are only two. And I’ll tell you why. It’s because job 1 for most members of Congress is to get re-elected. AND, there’s a tiny handful of Democrat and Republican power brokers that already have a comprehensive agenda laid out. After a mind-numbing half a day dialing the phone begging people for money, could anyone be psychologically geared up to do the tough, mentally challenging work of legislating? Especially when it’s so mindlessly easy to just criticize, demean and attack those dishonest, untrustworthy knuckleheads in the other party?

There’s tons of rock-solid evidence that negative campaigning works. Criticizing, demeaning and attacking works! So the typical member of Congress dials for dollars, criticizes, demeans and attacks and then, with the handful of hours left at the end of the week, does some actual citizen legislating.

And speaking of power… Wouldn’t it be great to be one of that tiny handful of power brokers in Congress?

You bet! But how does one get to be part of that select group? There’s an insanely simple answer. Money. Lots and lots and LOTS of money. Can you get that much cash calling one person at a time just like your 534 colleagues? Nope. For that, you need K Street. You need those deep-pocketed lobbyists.

Getting even one well-heeled lobbyist in your pocket takes years and years of effort. As a member of the House, I’d need at least 3 or 4 terms to land one. No worries, since my party already has the legislative agenda laid out, I can easily afford to take a few of that tiny handful of “citizen legislator” hours I have each week to suck up to some likely lobbyists. If I can pull it off, the lobbyists will continue to shovel money my way. They’ll also be happy to conduct big-time public relations campaigns building me up as a super-hero. That’ll make it much, much easier for me to get re-elected for the additional 3 or 4 terms I’ll need to return all the favors the lobbyists did for me.

Then, after 15 years or so in the House, I’ll be able to really focus on developing an extremely deep understanding of the key issues facing my constituents. And for each of those issues, creating a thoroughly thought through set of goals, objectives, strategies and tactics to provide value to my district and the nation at large. Then I’ll do wonderful things for another 3 or 4 terms a then finally go home and get back to my childhood dream of becoming a whatever. Or based on my 30 years of “public service” maybe I’ll run for a Senate seat…

OK, enough of diagnosing why Congress is so dysfunctional and getting worse. You already knew it was bad. You also know – since it’s obvious – that implementing term limits would be a major change that would substantially disrupt the current Congressional process. (Frankly, that’s a pretty strong argument in favor of them all by itself,) But… There are a few negative things term limits would bring along as well.

The strongest of the arguments against implementing term limits is that we’d be throwing out the baby with the bath water. There have been, are now and will be members of Congress who truly meet the standard of citizen legislator. Why would we want to get rid of those few who really are very, very good at an extremely demanding job? I don’t think we do, and therefore exceptions to the limits are part of my proposed change. I’ll get into some detail shortly.

Another argument against is that term limits could actually increase the influence of lobbyists. A last-term Congressperson will be looking for the next job, and might well bend over backwards to do favors for an influential lobby or two who could provide a terrific lucrative next career move. My proposed change addresses that as well.

A third argument against is the almost certain increase in the number of “rookie mistakes.” Like anyone new to a job, shiny new Members of Congress will inadvertently screw up royally. Personally, I don’t have a big problem with that, as long as said Member of Congress acknowledges the screw up and takes responsibility for the consequences. My proposed change addresses this issue.

OK, so what’s my outline for a proposed 28th Amendment?

Clause 2 – Exceptions:  (Sorry for a bit of math here, but the perspective provided by a few statistics is really useful.) Any Representative or Senator whose performance in office is more than 1 standard deviation above the mean calculated according to the provisions of Clause 3, may run for office again regardless of tenure. 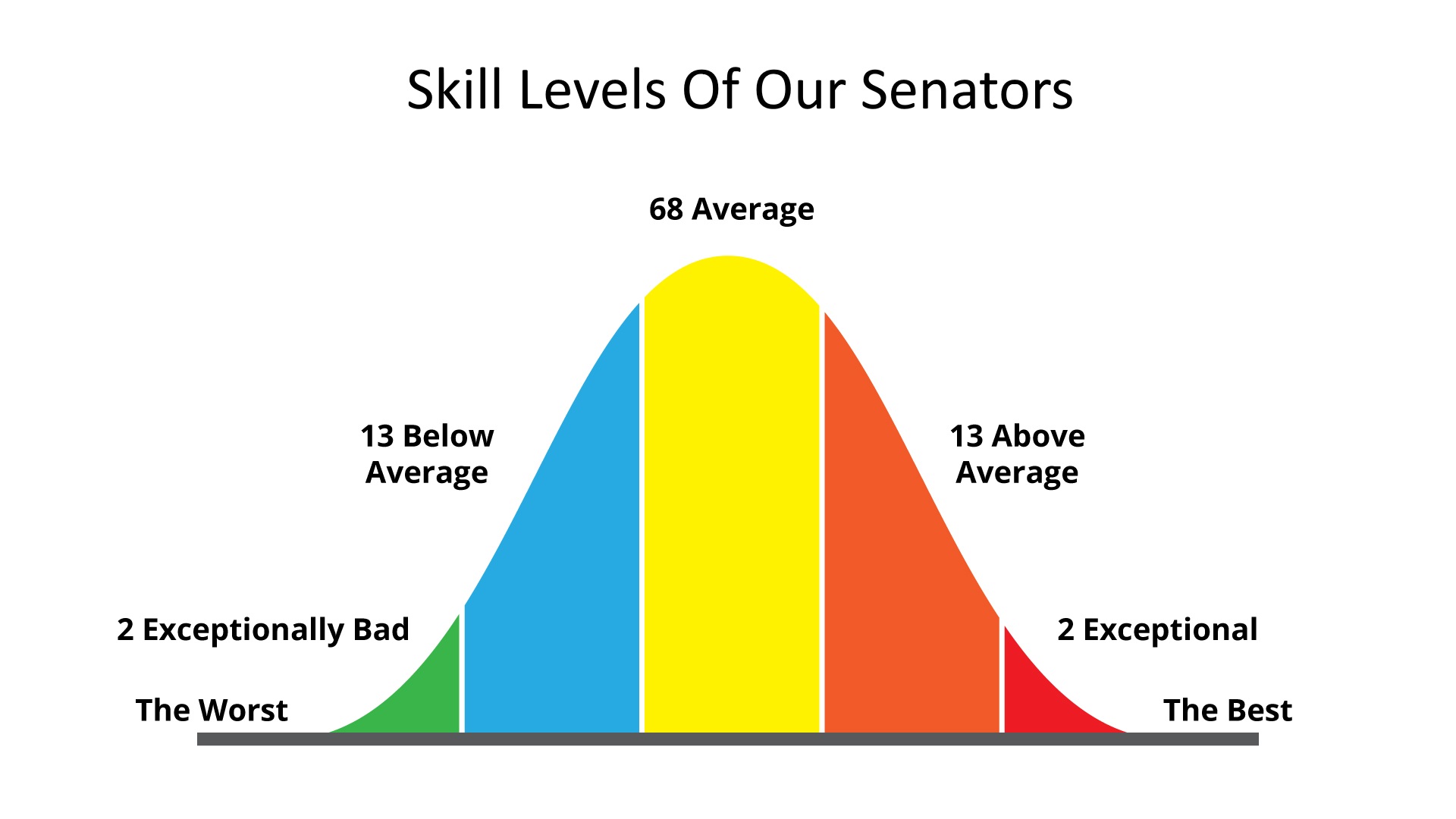 A few notes regarding Clause 2… The formula works out to a maximum of 16 current senators and 70 Representatives per election. The graph to the right depicts the normal distribution, the bell curve, for any group of 100 individuals. In that size group, let’s say, for example, for the United States Senate:

The 16th best sitting Senator will be the lowest-performing one that is eligible for the term limit exception. For context, the 17th best Senator is merely average. That’s according to universally agreed to and accepted mathematics developed by Carl Friedrich Gauss more than a century and half ago. A similar graph applies to the skill distribution in the House.

Clause 3 – Method of ranking of members of Congress:

The ranking system will be comprised of a score using a 1 (Low) to 10 (High) scale for each of a list of critical characteristics of a truly great Member of Congress. These characteristics are:

A few notes regarding Clause 3

So there you have it. Without a doubt, the proposed amendment as I have just outlined it can be improved and it needs all the normal lawyerly touches to make it official. Before you get into all that, however, think about how this structure will cause members of Congress to change their behavior.

Invest most of your time raising tons of money. That’s fine. Fundraising is indeed essential. Those who do it will just never make it to the eligible list.

Suck up to whatever lobby you want. That’s fine too. The massively deep expertise of the lobbies is also essential. Those who do it will just never make it to the eligible list.

Refuse to quickly and publicly acknowledge mistakes. That too is fine. Beating down your own ego is really, really difficult and painful. Those who don’t do it will just never make it to the eligible list.

Go ahead and make a ton of money while you’re Congress. I’m a capitalist, and I’m all for making money. Just don’t ever expect to make it to the eligible list.

Feel free to toe your party line. It’s really hard to effectively work across the aisle and craft a bipartisan bill that’s good for the country. It’s WAY easier to criticize, demean and attack those dishonest, untrustworthy knuckleheads in the other party. Just don’t ever expect to make it to the eligible list.

I’m your Intentionally Vicarious host, Todd Youngblood – hoping that my 28th Amendment outline gathers support – hoping even more that some form of my ranking process actually happens – and still having more fun than anyone else I know.