Is Healthcare a right? 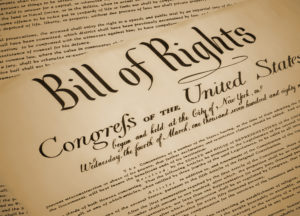 Is Healthcare a right? I’ll begin my answer to that question with the phrase, “Congress shall make no law…” Those are the first five words in the Bill of Rights – the first ten amendments to the Constitution of the United States. It’ll be clear shortly why I begin with those words…

There’s a lot of discussion boiling around here in the U.S. about rights. Basic rights – natural rights – human rights. Most certainly healthcare is part of that debate. Now let me be clear… I’m all for open discussion and debate. Those are two of the many things that make America great. Universal healthcare, the Affordable Care Act, possible revisions to it and the possible repeal and replacement of it should be part of that discussion and debate. That is the American way.

There’s a part of the healthcare and other political debates though, that drives me nuts.

…and that’s the widespread use of an extremely loose, sloppy, downright erroneous definition of the word “right.”

Western philosophy, dating back to the ancient Greeks defines rights in a negative sense. That is, a right forbids others from acting against an individual that holds that right. Notice the phrasing in the negative. Others – notably including the government – are forbidden from acting against the right holder.

Now before I go on and provide a compelling set of examples of the negative nature of rights, let me be clear about something else… Positive rights do exist. The thing is, a positive right does not exist until it is created by a contract that is agreed to by all involved parties. If I sign a contract to provide some product or service to you, then – and only then – do you have the positive right to demand that I deliver that product or service to you.

Now back to the Bill of Rights. It’s far from the only set of examples that a right does not COMPEL, but instead FORBIDS, but it sure is a really, really good one.

Here’s the first amendment in its entirety:  “Congress shall make no law respecting an establishment of religion, or prohibiting the free exercise thereof; or abridging the freedom of speech, or of the press; or the right of the people peaceably to assemble, and to petition the Government for a redress of grievances.”

There’s that phrase again, “Congress shall make no law…” The first right in the Bill of Rights FORBIDS the government from getting into the religion business, or to mess with my free speech, etc. It DOES NOT compel the government or any individual to DO anything!

Now I don’t intend to parse every word of each of the 1st 10 Amendments, but I will review the key parts in each of them that address what the federal government cannot do. Again, remember the notion in Western Philosophy of defining rights in the negative, and take note of all the negative phrasing in the Bill of Rights.

As I mentioned earlier, the Bill of Rights is just one of a myriad of examples of the negative basis of rights. Rather than wade through additional examples, it’s more useful to use a different perspective and think through the implications to us all of a positive right to healthcare.

If I have a positive right to healthcare, that means some healthcare provider is compelled to treat me. My positive right makes it OK for me to command that another citizen must provide me with his or her time, effort and knowledge. Really? My doctor is my slave and has to do what I say?

And what if I need x-rays, medication and a set of crutches? I’m entitled to the time, effort and knowledge of the x-ray technician too? And I get to use the x-ray equipment that somebody else bought and paid for? And I can go to the pharmacy and just take the meds I need and the crutches I want – for free?

I don’t think so. Do you want to live in a country where somebody else is entitled to take your time, effort, knowledge and property without your express consent? Again, I don’t think so.

I’ll wrap this up by making a very clear and important distinction between a right and what is right.

Would it be the right thing to do to figure out how to provide healthcare to all Americans? Absolutely! Personally, I want to see it happen.

It’s just that the way we’ve tried to do it so far – dating back at least to the wage controls imposed by Franklin Roosevelt’s executive order back in 1942 – is a goat rodeo of epic proportions. The stunningly complex flood of the unintended consequences of sweeping government actions continues to increase the cost and decrease the quantity and quality of healthcare in the U.S.

…but all that’s a rant for another day.