In one of the very early Intentionally Vicarious podcasts I had a conversation with Retirement Coach Randy Yeomans. Just a few days ago I came across a Facebook post of his that really caught my attention, and I want to thank him for sharing it. The post consisted of the image which is shown to the right and is titled “Half Ikigai vs. Full Ikigai.”

The diagram is one of those rare things with a message that is simultaneously easy to understand and profound. On top of that, it’s derived from yet another set of concepts deeply rooted in Japanese culture.

I perceive the version Randy shared as the businessperson’s shorthand version of Ikigai. What he shows as “Half Ikigai” considers 1) Doing what you love and 2) Doing what you’re good at. The ability to combine those two things would obviously contribute to having a satisfying career.

Randy’s “Full Ikigai” adds two additional elements. 3) Doing what the world needs and 4) Doing what you can get rewarded for. The ability to combine all four of these would obviously contribute to having an even more satisfying career.

Great stuff! I strongly suggest you take it to heart and strive for a career that enables you to:

Not easy, but most certainly worth striving for.

I got that far into thinking about Ikigai when the “Explore” component of my “Explore-Question-Learn-Think” gene kicked in. And I started digging deeper. I found an article written by Nicholas Kemp who noted that the concept was popularized by Marc Winn in 2014 who readily acknowledged at the time, his knowledge of Ikigai was based pretty much solely on Dan Buettner’s Ted Talk on How to Live To Be 100+. Whatever the origin, Winn’s formulation is a bit more sophisticated as shown in his version of the image.

In addition to the four imperatives noted above, Winn added four definitions. He sees… 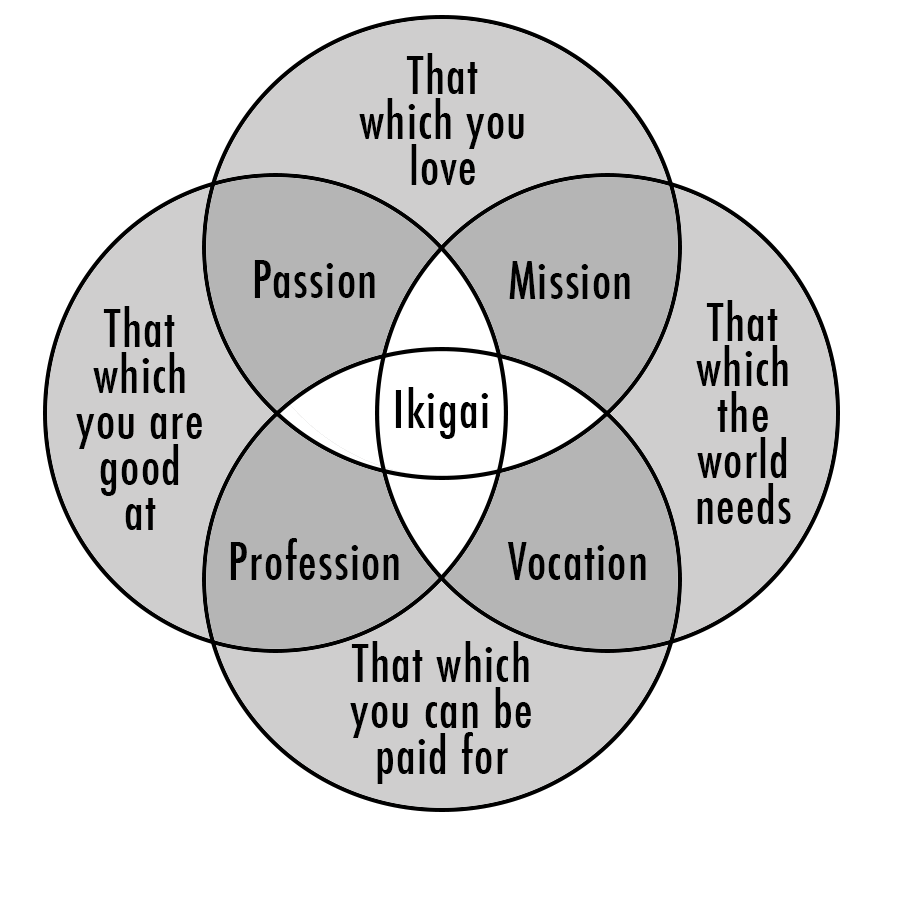 I find these definitions to be particularly useful in gaining a deeper understanding of the best way to steer your life. It enables consideration of reality in choosing what you do with yourself right now! For example, a younger person probably needs to put more emphasis on paying the bills. Doing what you can get paid for can easily trump doing what you love.

Not that I’m necessarily the best example, but I’m obviously familiar with what I’ve done. Personally, I started my career focused on “Profession.” In other words, I did what I was good at and for which I could get paid. I liked what I did. Can’t say I loved it though. And for sure only a small sliver of the world needed a mainframe computer back then!

Over time, I worked pretty hard to find work that I truly did love. Eventually, I was lucky enough to successfully start my own business and got to the point where I really did love what I was doing. Three out of four ain’t bad! But that 4th component of Ikigai… For sure there were and are enough people that want to buy sales management consulting for me to make a good living at it, but it’s most certainly not one of the top crying needs of the world.

For what it’s worth, I launched the Willful Impact project early this year. I hope you’ll take a few minutes to browse around willimpact.com. It’s my attempt to do something the world truly does need – a greater awareness of commitment to providing community service. I’m not sure I can or even particularly want to make any money at this endeavor, but finally doing a deep dive into that “world need” section of Ikigai is proving to be quite personally rewarding.

In any case, I strongly recommend staring at and thinking about Winn’s version of Ikigai and then updating your career plan with the insights you gain.

I also recommend watching the Dan Buettner TED Talk I mentioned earlier. Doing so will flesh out your understanding of what I’ve called the businessperson’s version of Ikigai as well as an inkling of what the original Japanese version is all about.

For me, the concept of Moai was the coolest part of the video. It’s a Japanese word meaning “meeting for a common purpose,” that originated from the social support groups in Okinawa. Buettner uses an example of 5 women with an average age of 102 that have been together as friends for 97 years! Think about that as a support group for when things get rough and a cheerleading squad for when things go well.

I’ve seen a study that indicates Americans, on average, have 1 1/2 good friends. Quite a contrast to those Okinawans! How many good friends do you have? I’m fortunate enough to have good friends that number in the double digits. Could be one of the reasons I get to claim to be having more fun than anyone else I know… Or maybe I’m just lucky… Or maybe I just spend too much time partying… 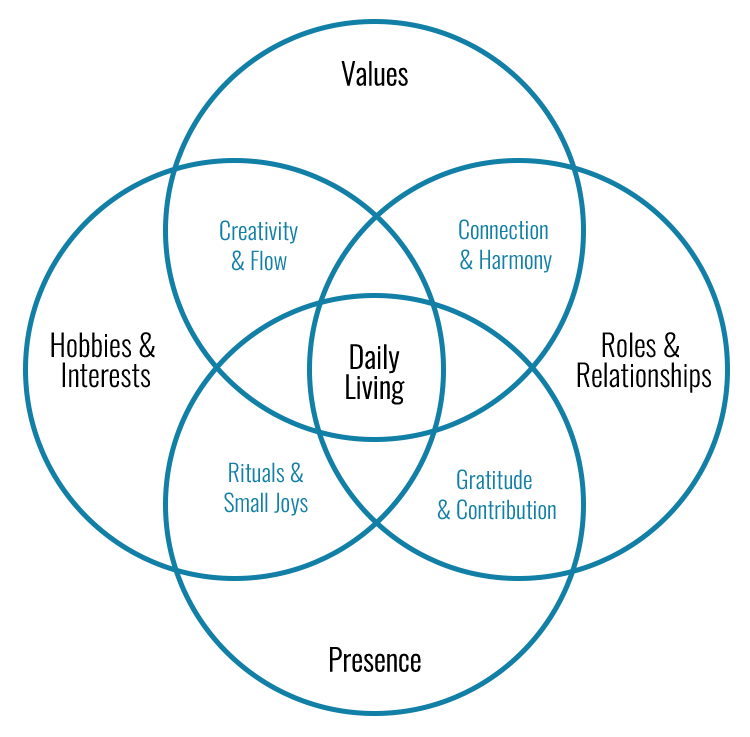 Which, in any case, brings me to “for real” Ikigai, which translated into English means “the reason for which you wake up in the morning.” Clearly this is a deeper concept than the business version I discussed earlier, and one that applies when taking a holistic view of your life and considering both the big and the little things.

Frankly, the real deal Ikigai gets pretty deep, pretty quickly, so I’m not going to dive into it too much in this episode. The diagram provides an overview and I’ll also include a link below to a book about it. In it, author Ken Mogi uses “The 5 Pillars of Ikigai” as the basis for his explanation. The pillars are:

Just those 5 points provide a ton of additional food for thought. And since I’m still rolling those notions around in my head, I think I’ll quit for now.

I’m your Intentionally Vicarious host Todd Youngblood – Still working on the businessperson’s shorthand version of Ikigai for myself. Determined to add even more Moai to my life. Fascinated that a simple, image-only Facebook led me down such an interesting path. And getting better every day at having more fun than anyone else I know.