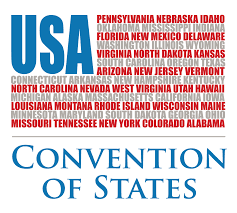 The Constitution of the United States has stood the test of time. To a massive extent, the framework it provides is responsible for the insanely great standard of living we Americans enjoy. Yeah, yeah, we have lots and lots of problems. So what? That’s the nature of the universe. Solve one problem and three more new ones pop up as a result of that solution. All three might even be thornier than the solved one. BUT… That old problem IS solved, and even with the new problems we ARE all better off – a LOT better off.

Shoot, we’d all be bored stiff if we didn’t have something to gripe about and conquer anyway. My point here is to consider this astonishingly good system we have based on the Constitution, and to hunt around for pieces of it we’re not fully taking advantage of.

Seems to me that the 2nd part of Article V and the entire 10th Amendment have been and are still being ignored.

Just for a refresher, Article V addresses the process to make changes to the constitution. The 10th Amendment is refreshingly straightforward for we in this very complex 21st Century. The entire thing reads as follows:  “The powers not delegated to the United States by the Constitution, nor prohibited by it to the states, are reserved to the states respectively, or to the people.”

So…. Based on the 10th Amendment, one might expect the “book” containing federal law to be relatively compact, right? Well… When federal laws were first codified in 1927, they did indeed fit into a single volume. By the 1980s, there were 50 volumes of more than 23,000 pages each. Today? Nobody knows. Seriously! Nobody knows!

Back in 1982 the Justice Department tried to count up just the total number of federal, criminal laws. After 2 years, they had identified about 3,000 and then gave up deeming the effort utterly impossible. There are probably now about 4,500, but again, nobody really knows. How about the Tax code? It alone has more than 75,000 pages. If you can read a 300 page nonfiction book every week, it would take you 5 years to get through it all.

In a typical session of Congress 750 or so new bills get passed. They all have hundreds – many have over 1,000 – pages, and votes on them are taken within a day or two after members of Congress get a copy. They don’t know – they can’t possibly know – all that’s in them. Literally NOBODY knows all of what’s in them!

And there’s more! To all of the above, add two more things:

Now back to my opening question. What parts of the Constitution are we not taking advantage of? Given what I just walked you through, it’s crystal clear that the 10th Amendment, for all practical purposes, does not exist. We have 2+ Million federal employees – that’s not including the Post Office or the Military by the way – hard at work trying to justify their existence by enforcing literally tens of thousands of laws documented in hundreds of thousands of pages. AND, without any involvement at all by Congress, using Chevron Deference to dream up, codify and enforce thousands more of their own rules and regulations. What happened to “…not delegated to the United States by the Constitution???”

Which brings me to the second part of Article V, and my often stated opinion that our governors and state legislatures – with the unyielding support of we the people – need to step up and throw a net over a federal government run wild.

The operative phrase in Article V is “…on the Application of the Legislatures of two thirds of the several States, shall call a Convention for proposing Amendments…” Such a convention has never been called.

If it were called and I were in charge, I’d take 1/3 or maybe 1/2 of the federal budget and divvy it up among the 50 states based on population. For perspective, that’s $3.4-5.1 Billion for the people in each and every one of the 435 Congressional Districts in the U.S. each and every year. To be crystal clear, I want each of the states to individually decide how to spend – or maybe not spend – that cash. Maybe they should just give it all back to us!

Said differently, my key goal would be to dramatically cut back the size of the federal money bucket. To force them to take a hard look at what they’re doing, set priorities and stop doing that which is not explicitly delegated to it by the Constitution. Just like if I took half your income and savings; it would be tough, but you would figure out how to survive. So will the feds.

OK, OK, taking 1/2 or 1/3 of the federal budget and divvying it up among the 50 states is admittedly a bit radical – maybe even extremely radical – and I’m not going to be put in charge anyway. So how about we first go find 34 states with the intestinal fortitude to call for a Convention of States? And how about we set some reasonable goals for that Convention? Like, for example:

Frankly, I’d be happy if the first Convention of States could do any one of those three. The others can be addressed in subsequent Conventions of States. To paraphrase Michael Corleone…

What I want… what’s most important to me… is that our 50 governors and state legislatures step up and gently shove the federal government back into the role the Founding Fathers envisioned.

And guess what? According to ConventionOfStates.com, 13 states have already called for a Convention. Ironic that back in 1787, it was delegates from 13 states that got together and wrote the Constitution to begin with!

Of course there are objections to doing such a thing today. The biggie is the risk that a Convention of States – driven by wads of cash from special interests – would lurch out of control and make sweeping, wholesale changes to the Constitution. That risk is exacerbated by the fact that the process for conducting such a convention is ill-defined, and there aren’t any legal precedents for it at all.

Yeah, OK… If I wanted to cede more and more power and control over my daily life to the Federal Government, that’s exactly what I would say. And I’d be dead wrong. Just consider another phrase contained in Article 5:  “…when ratified by the Legislatures of three fourths of the several States…”

Nothing at all can happen unless and until not just a 2/3 super-majority, but a 3/4 super-duper majority of the states agree they want it to happen. Getting all those states to agree on anything would be impossible unless the proposal is totally and utterly sensible.

Just like the other 6 Articles in the Constitution, the Founders got Artice V right too. They foresaw the fact that Congress will NEVER vote to reduce its own power and influence. That’s why they – at the behest of George Mason – provided for a Convention of States.

I’m your Intentionally Vicarious host Todd Youngblood – Still convinced that the federal government is too big for its britches – that the power and control pendulum needs to swing back toward the states – and urging you to check out ConventionOfStates.com, do a bit of research, and decide for yourself if you want Washington, DC to have more or less control over what you can and cannot do.