By Todd YoungbloodJuly 20, 2018Constitution
No Comments 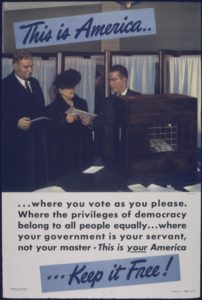 Democracy? Ummmm…. How about Republic?

It’s not too difficult to get people to agree that they don’t like the 16th Amendment. Usually it’s simply a matter of providing a reminder that it was the amendment that provided for a federal income tax and led to the creation of everyone’s favorite federal institution, the IRS. What’s not to hate?

Frankly though, I like the 17th Amendment even less.

It’s far more subtle and has deeper, significantly more profound impacts. It takes a bit of concentration to grasp the implications, so put on your thinking cap…

Article I, Section 3, Clause 1 of the Constitution begins:  “The Senate of the United States shall be composed of two Senators from each State, chosen by the Legislature thereof,…”

The 17th Amendment begins with:  “The Senate of the United States shall be composed of two Senators from each State, elected by the people thereof,…“

The fundamental change is clear from the original phrase “chosen by the Legislature,” vs. the amended phrase “elected by the people.” At first blush, the change seems obviously logical and better. It feels very, very American and like a hallmark of any democracy to have Senators elected by the majority of the people in a state. Well, OK, but…

So the 17th Amendment moved us closer toward a pure democracy by taking the selection of Senators out of the hands of the state legislatures and basing it on a popular vote. Previously, the people of each state, via a popular vote, selected their state representatives who in turn selected their two federal Senators. A Senator used to be directly beholden to the state legislature. This provided a buffering layer between the Senator and the citizens of the state.

That dramatically changes a Senator’s priorities and decision process and makes them virtually identical to the priorities and decision process of a member of the House. Each is directly beholden to the citizens of state, and nobody is directly beholden to the state itself. That is the crux of the spooky move closer toward a pure democracy, so let’s talk more about it.

First and foremost, the United States of America is NOT a democracy. Never was. The United States is a Constitutional Republic. The Founding Fathers were extraordinarily wary of – downright afraid of – pure democracy. Alexis de Tocqueville brilliantly and famously articulated their fear with his phrase, “the tyranny of the majority.”

I think about this notion of the tyranny of the majority in the context of the TV Westerns I watched as a kid. A group of ranchers would capture an alleged cattle rustler and “string him up.” In other words, mob rule. The majority said the poor sap was guilty, so guilty he was, and out came the noose. That’s NOT what the Framers of the Constitution had in mind at all.

What they had in mind was the rule of law. And the law says that regardless of how painfully clear the guy’s guilt may be, he still gets a trial by a jury of his peers, legal representation, etc.

That’s exactly why the Framers jumped through all kinds of hoops to avoid creating a pure democracy and those emotionally charged, snap decisions by mobs. They purposefully created a system of government with a separation of powers among legislative, executive and judicial branches, and between the centralized, federal government and the state governments.

Now let’s talk about power. I’ll do so by examining the mind-set of a hypothetical, pre-17th Amendment Senator. This woman is pretty darned smart, confident, determined and capable. Anybody with the wherewithal to become a United States Senator is an exceptional human being. OK, she wants to sponsor Bill X. For our purposes, the exact nature of the bill doesn’t matter. It’s only important that the Senator fervently wants to get it done.

Problem is, she’s a Republican who was appointed to her 6-year term by her Republican state legislature 4 years ago. The just-elected state legislature is now majority Democrat. (Note that I could swap the parties without changing the scenario…) Anyhow, her state legislature, to whom she is beholden, is beating the crap out of her to torpedo Bill X. They want her to “kill her baby” so to speak.

Now… What if she had been elected after ratification of the 17th Amendment. Statistically, about 80% of U.S. Senators get re-elected. Or I could put it this way… Statistically, about 80% of U.S. Senators retain their power. She can tell her state legislature, now run by the opposing party, to go to hell with virtually no impact whatsoever on her chances for re-election and to retain her power.

You with me here? In this scenario, the post-17th Amendment state government has essentially no power over its Senator; it’s so-called representative in the U.S. Congress. This state and all the states are considerably weaker – LESS powerful. And where did that power go? It shifted from the state to the federal level.

So I don’t much like how the 17th amendment caused a massive centralization of power – away from the states and into the federal government.

In truth, we’re nowhere even close to that level of catastrophe. We are, however, slowly and inexorably moving in that direction. We need to reverse that trend.

Will our current crop of U.S. Senators get on board with repealing the 17th Amendment? Yeah, right. When pigs fly. They’ll never expend that much effort to reduce their own power.

What we need to do is put pressure on our Governors. As soon as we can get 34 Governors on board, they can call for a Constitutional Convention to repeal an amendment that should be just as reviled as the IRS, and is just as ill-advised as Prohibition.

I’m your Intentionally Vicarious host, Todd Youngblood – looking forward to the day when the balance of power between the federal government and the states is restored – or at least much, much closer to – the level the Founding Fathers intended.