Have You Thoroughly Thought It Through? (Really???)

By Todd YoungbloodJuly 5, 2019Uncategorized
No Comments 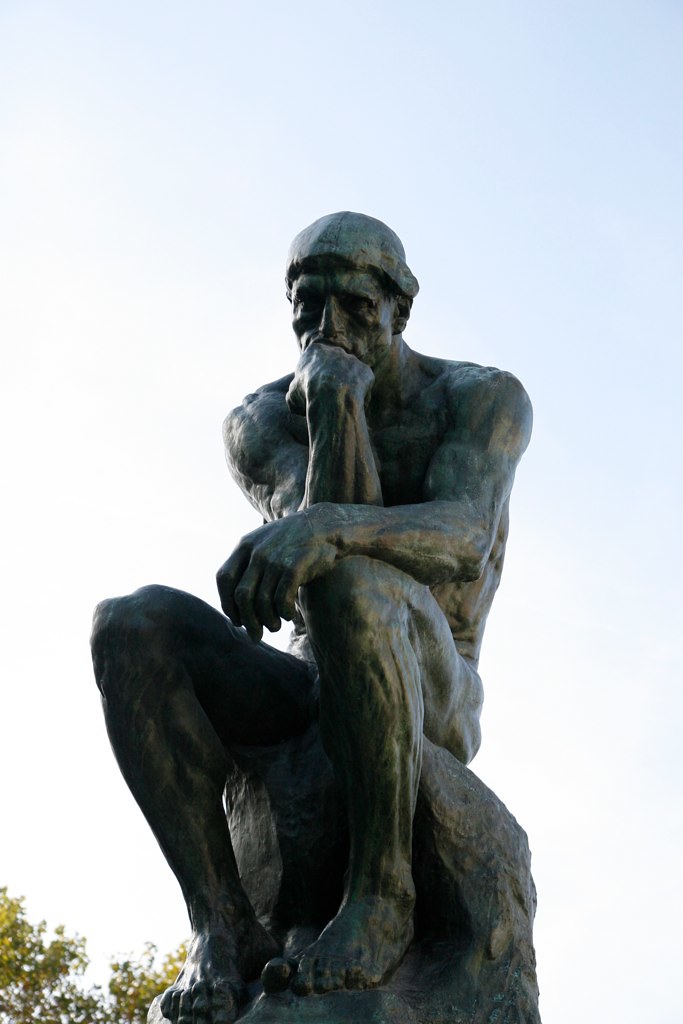 Even though it consistently annoys the daylights out of me, I follow national and local political news pretty closely. I try to read, listen to and watch as broad a variety of sources and perspectives as I can. It’s annoying because virtually ALL political news gets delivered by people who are totally certain about the validity of their own perspectives. They have utter disdain for any shred of dissenting opinion; an attitude that if you don’t agree, you’re either incapable of nuanced, sophisticated thought, an idiot or both. The parade of shouting matches with multiple cock-sure so-called experts talking over one another never ends.

In spite of all that, I figure following it all helps me gather enough information and insight to make intelligent judgements for myself. And then the other day I randomly ran across a comment made by Albert Einstein, arguably one of the smartest, most intelligent people ever. He said…

“The more I learn, the more I realize how much I don’t know.”

Isn’t it interesting that while one of the smartest guys who ever lived was acutely aware of massive gaps in his knowledge, all the politicians and political reporters, commentators, analysts, strategists, etc. are all so dead certain of the accuracy and completeness of all their opinions? It’s even more interesting when I think about all the politically-tinged conversations I have with the people I come across in my day-to-day world. They too, almost universally are loaded up with strongly held opinions about the major issues.

And yes, I’m guilty too. Without a doubt, I typically do not hesitate to state my own perspective with as much conviction as I can muster. I really ought to be a bit more like Einstein – always aware of the massive gaps in my own knowledge. So ought you, and so ought our political friends and the media that follow them.

The fact of the matter is that the controversial issues of our time are exceptionally complicated.

That’s what makes them controversial! Think about the reverse situation. Think about issues that are not controversial. Armed robbery, murder, rape and running red lights are and should be illegal. We don’t argue about any of these things because the fact that they’re wrong is blindingly obvious.

But the controversial stuff is complicated. Make a snap judgement about one of these, and you run the risk of being horribly wrong. Ditto for long-held opinions. Having the courage of one’s own convictions is certainly admirable, but… What if you formed that opinion long, long ago using flawed or incomplete information? What if way back then you made a snap judgement and are sticking to your guns purely out of habit?

Still worse, how many times do you observe those around you pretty much instantaneously adopting a position because politician X said so? Or because media pundit Y said so? How often do you personally instantaneously adopt a position because the spokesperson of your political party of choice says you should? That is obviously a really dumb way to form an opinion about anything that’s the least bit complex. What’s required – and this is obvious too – are three things:

Especially that third one. That think about it, all of it part. Be ever-aware that confirmation bias is a powerful thing that generates and reinforces your blind spots. I’ll state it even more adamantly…

If you have extremely strong feelings about any major political issue, assume you probably haven’t thought it totally through and you’re potentially sounding like an idiot.

I’ll run through an example to illustrate what I mean. I think perhaps you’ll agree that abortion is an exceedinly complex and controversial issue. And for sure there are a lot of strong opinions about it out there.

The abortion debate generates all kinds of misguided pronouncements that get enourmous, hysterical media coverage. Like that of Emilia Clarke, who portrayed Daenerys Targaryen in HBO’s Game of Thrones. She has made it quite clear that she will NEVER work in the state of Georgia because of its recently passed “heartbeat bill.” It’s so-called because it bans abortions after a fetus exhibits a heartbeat, usually around the 6th week of pregnancy.

Here’s the “Oooooops!” though…. Game of Thrones was filmed primarily in Northern Ireland which has one of the strictest abortion laws in the world – notably substantailly stricter than that of the state of Georgia. Her pronouncement therefore, demonstrates that at best, Ms. Clarke is well meaning, but terribly ill-informed, or at worst is a shameless, publicity-seeking hypocrite.

It is NOT my intent pick on Emilia Clarke. In fact, I’m a big fan! My intent is merely to provide an example of what Einstein would refer to as failing to realize how much you don’t know. And please note, by the way, that this example touches on only a fraction of the tip of the iceberg regarding extensive knowledge about abortion.

In addition to ignorance about Northern Ireland’s law, the “Queen of Meereen, Khaleesi of the Great Grass Sea, Mother of Dragons and Unburnt Breaker of Chains” also fell victim to the fatally flawed framing of the abortion debate. I’ll touch on just two of those aspects of that flawed framing.

She obviously believes, as do many other thoughtful, intelligent people, in a woman’s fundamental rights to privacy and to make decisions about her own body and her own health care. Well, duh….. I’m so sick to freaking death of hearing that inane argument. I’m even sicker of hearing the not-infrequent additional statement that it’s all about evil men exploiting the patriarchy and exerting control over women. Please… The fact of the matter is, all people, ALL human beings have the fundamental right to privacy and the fundamental right to make decisions about their own bodies and their own health care. Nobody other than lunatic-fringe, whack-job fanatics disagree. It’s simply not a valid point of contention regarding abortion.

Unless, that is, we consider the fundamental right to life of the fertilized egg, or zygote, or “cluster of cells,” or fetus, or unborn child, or whatever other term you may prefer to use. I’ll come back to this point shortly…

But first, let’s also address that fact that being “Pro-Choice” is yet another aspect of the invalid framing of the abortion debate. Virtually everybody  is Pro-Choice. Do you personally know a single, non-psychopathic person who is Anti-Choice? Who believes that individuals do not have a basic human right to make their own decisions about their own bodies and personal health care? I sincerely hope you do not.

The notion of “Pro-Life” is every bit as irrelevant. Virtually everybody is Pro-Life. Do you know a single non-psychopathic person who is Anti-Life? Who believes that killing another person is perfectly fine? Again, I sincerely hope you do not.

The framing of the abortion debate as Pro-Choice vs. Pro-Life is terribly flawed, generates much hysterical, useless rhetoric and firmly steers discussion away from the real fundamental question, which is…

Exactly when does a human life begin?

That question is critical, because all humans have a fundamental right to life. If it’s a human life being ended, it’s not an abortion, it’s murder. Firmly establishing when a human life begins is the bright red line between a legal, moral medical procedure for a woman and a capital crime.

Let’s examine extremes to start addressing the question. Traditional Catholic doctrine holds that abstinence is the only acceptable form of birth control. Let’s go more extreme. Thinking about having sex preceeds actually having the sex that will result in a new human life. Therefore, a law that makes thinking about sex illegal – unless there is intent to produce a new human life – could be proposed.

I think we can all agree that such a “thought crime” form of anti-abortion law is too extreme and makes no sense.

At the other end of the spectrum, one could conceivably argue that life does not truly begin until the first birthday. For that matter, even a two-year-old is totally and utterly incapable of surviving alone. Based on that premise, a law making abortion up to the first birthday legal could be proposed.

We can also certainly all agree that such a pro-abortion law is way too extreme.

So the correct answer is somewhere in between. What we need is to do is identify the precise point at which human life begins. Is it:

Where along that spectrum does human life truly begin? And who should decide? Let’s add to the complexity. Pick any one of the above choices, and the ambiguity thickens. The small town Catholic parish priest and former President Clinton just might differ on their respective definitions of “having sex.”

Or how about viability? What exactly is the definition of that term? Roe v Wade said that viability commences at the end of the first trimester, about 13 weeks; and that up to that point, the decision to abort is solely that of the mother who also has the right to privacy about the whole matter. The earliest birth on record was in 2014 in San Antonio, TX at 21 weeks 4 days. Was Roe v Wade too conservative with its 13 week standard? Or was it looking ahead to the inevitable advances in medical technology? By 2050, will viable birth be possible at 10 weeks? Or maybe 9? Or less? How can we possibly predict?

As an aside… I hereby declare that every Supreme Court Justice in office during my lifetime was and/or is smarter than me. Here’s a snippet of how this group of legitimately high-intellect folks defined the term viability. “..potentially able to live outside the mother’s womb, albeit with artificial aid.” Read that phrase again… I don’t know about you, but that definition strikes me not only as variable over time, but also painfully vague. Potentially able to live? Point me to the scientist who can beyond doubt verify “potentially able to live.” Also, I guarantee you the “artificial aid” available in 2019 is WAY better than that of 1973.

Where do you draw the line between abortion and murder? Why? And why should the rest of us agree with the likes of you?

Feeling a little unsure about your answer? Or have you already thoroughly thought it through? Are you smarter than Albert Einstein and already know everything necessary to make the existentially correct moral, ethical and legal decision. Oh… And of course you’ll include your provisions for threats to the life of the mother and cases of rape and incest.

I’m your Intentionally Vicarious host Todd Youngblood – Sobered and humbled by thinking and writing about an issue as weighty as abortion. Realizing that lots and lots of other thorny issues are out there – Immigration, over a billion people worldwide living in extreme poverty, the Iranian Nuclear Threat, the $200+ Trillion total of Federal Debt and Unfunded Liabilities, and on and on… I guess I’m just going to keep on learning, and thinking, and trying to remember Einstein’s perspective and staying dedicated to having more fun than anyone else I know.