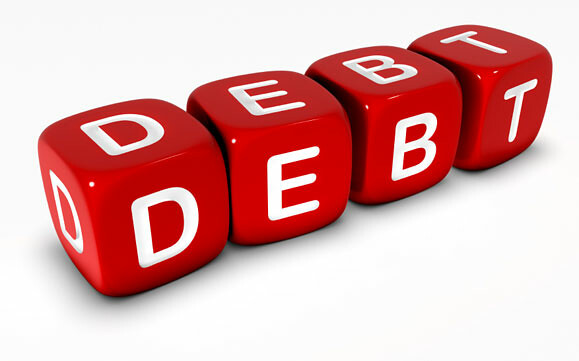 I just can’t help myself. I feel compelled to continue along with the dual theme of 1) the government really has gotten too big and 2) We the People force our politicians not only to spend more and more and more, but also to deceive us about how much they’re spending and where the money is coming from.

Check out the Government is Growing Faster than GDP and the Demanding Deceit episodes. If the logic in those two episodes doesn’t give you agita, the data will. And this week ain’t gonna’ be any different because it’s time to look at our federal debt. The politicians’ level of deceit about debt is going to rock you back in your chair.

What better place to start than with the fact that the federal government is now officially in hock for $22 Trillion. Frankly, it’s hard for me to understand just how stupendously big that number is. Do you get it? One interesting way to think about it is that with that much money, you could go into every single store, in every single town, in every single country in all of Europe and buy literally everything.

Or how about this… Last Fall, I bought a brand new GMC Yukon loaded up with bells and whistles for $63K. It is one cool vehicle. The coolest one I’ve ever owned. With $22 Trillion I could buy one these beauties for every single man, woman and child in the United States including all the illegal aliens! I hate getting stuck in traffic though, so I won’t.

Or how about this… Something the Federal Reserve calls M2 represents the total number of dollars that currently exists. Right now, M2 is $14.5 Trillion. That means…

If we took literally every single dollar in existence in the universe today, and used it to pay down the federal debt, we’d still be short $8.5 Trillion.

We owe more dollars than there are dollars! I honestly don’t know what to think about that, but I find thinking about it to be entertaining as hell!

Another way to consider the national debt is versus Gross Domestic Product. Back in 1929, the ratio of Debt to GDP was 16%. That’s like having an income of $100K and debt of $16K. Easily manageable. That ratio spiked during World War II at 119%, then slowly settled down to around 33%-ish by the late 1960s and stayed there until the early 1980s. At that point it began a steady upward climb to today’s 106%. To clarify, that means the federal government now owes more than the dollar value of what the entire country can produce in an entire year. 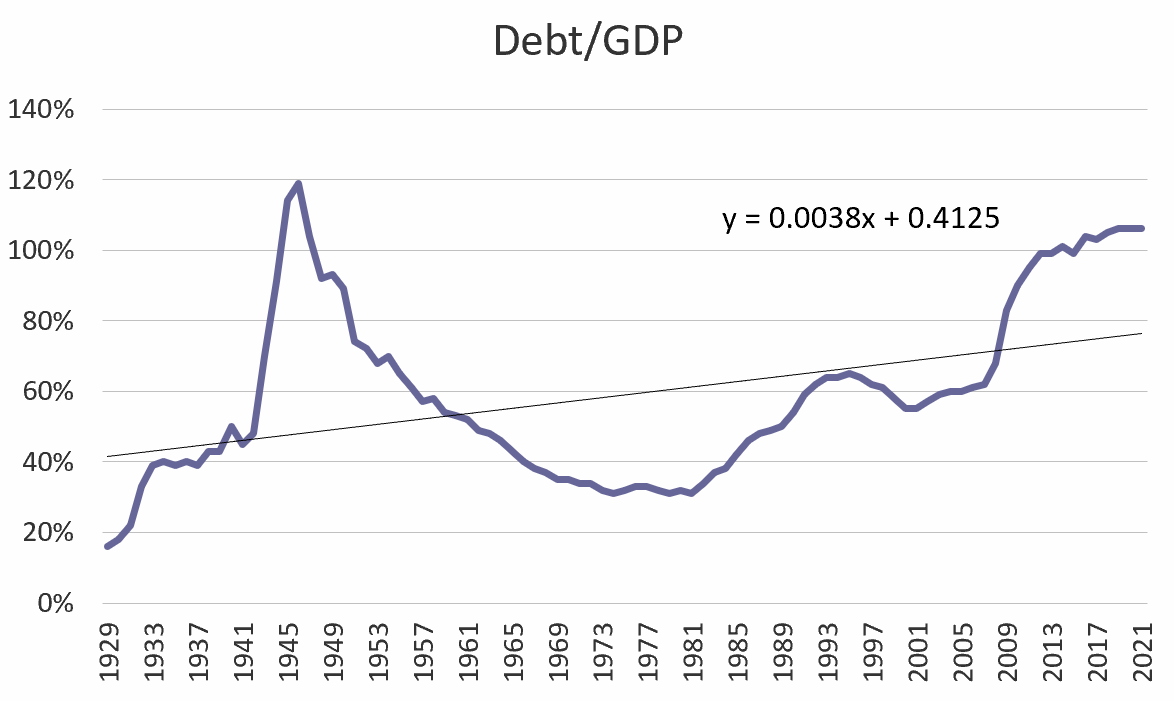 It makes sense to me that during World War II, by far the greatest catastrophe in human history, we decided to borrow a ton of money to win it. So why are we in hock for the same relative amount today? We’ve got problems sure, but nothing even anywhere remotely near as catastrophic a situation as in the 1940s.

Economists used to start seriously ringing their alarm bells when a country’s Debt to GDP ratio got greater than 100%. Not so much anymore. Japan’s economy has been lackluster at best for decades, but they are surviving with a 236% ratio. They’re working like crazy to bring that number back down to sea level.

Just for grins though, let’s say things don’t totally fall apart until Debt/GDP is 300%. And then, let’s take a look at the REAL debt levels of the USA.

Exactly how much Unfunded Liability the government has is up for debate. The United States Treasury says it’s $46.7 Trillion. Huh??? $46.7 Trillion???

That more than triples the actual amount the federal government owes – up to $76.7 Trillion, or 374% of GDP.

Ooooooopps! I guess Japan IS NOT the world’s most irresponsible debtor country after all. And I must also point out that nobody who studies this stuff seems to believe the Treasury Department’s Unfunded Liability number. The estimates I can find start at $80 Trillion and go up to $210 Trillion!

So total federal government financial liability could be as high as $287 Trillion, or a Debt to GDP ratio of 1,400%.

That’s like having a $100K salary and $1.4 Million of debt. I’ll reiterate… Mainstream economists warn about serious trouble ahead when Debt to GDP exceeds 100%. And we are more than an entire order of magnitude higher? 14 times greater than when the looming financial disaster detector starts banging, clanging and flashing big, bright red lights?

And we’re now in the habit of adding on another $1 Trillion+ more debt every year! Who has more financial self control? The Federal Government or a Drunken Sailor??? Think about that question… And also think about the wisdom of turning management of your retirement nest egg over to the next drunken sailor your meet.

Which brings me to my final fun fact of the episode… The largest single holder of U.S. government debt is the U.S. government. How’s that for a neat trick? It’s deceitful as hell, but a neat trick nonetheless. When I bought the GMC Yukon I mentioned a bit ago, it sure would have been nice if I could have gotten the loan from myself. I’d have given me a better deal than the bank did.

But how is it possible to borrow money from yourself? Well… Unless you’re the Federal Government, you can’t! At least you can’t AND get your hands on actual additional cash. As of now, the Feds have “borrowed” $5.9 Trillion from themselves, mostly from the Social Security and Medicare trust funds.

It’s a pretty nifty trick built on top of the Unfunded Liabilities game! I’ll simplify the story, without losing the key point which is that the Social Security Trust Fund has exactly no cash. ALL of its assets – as per the original and un-amended section of the Social Security Act of 1935 – are invested “in interest-bearing obligations of the United States or in obligations guaranteed as to both principal and interest by the United States.”

Here’s what that means in plain English. In 1937, the first year the whole shebang got implemented, the Feds collected $767 Million via the new FICA payroll tax, and paid out $1 Million in Social Security benefits. Congress took the remaining $766 Million and spent it. They graciously gave the Social Security Trust Fund an IOU – which they called a United States Government Bond – for that same amount. In 1938, the tax yielded $375 million and $10 million got paid out. Congress spent that $365 Million and wrote out another IOU.

Etcetera… For 69 of the last 80 years, Congress has had all this extra free cash to play with. They had to scramble only 11 times to scrounge & swipe funds to pay Social Security beneficiaries from elsewhere within the government. Right up to 2018 though, they had a 35 year run going of getting those extra buckets of money from the payroll tax.

In 2018, they had to scrounge & swipe funds for the 12th time. 2019 will be the 13th time. Care to guess what’s projected to happen every year for the next 70 years? Yup – more scrounging and swiping each and every year. Hell, even the smoke and mirrors produced magic IOUs in the so-called Trust Fund will be gone in 15 years. That’s the Social Security default you hear about.

Something’s got-ta-give here, folks. Help me out, will you? Because…

I’m your Intentionally Vicarious host Todd Youngblood… Wondering how we can sink every single dollar in existence into paying off the federal debt and still come up $8.5 Trillion short. Also wondering how anyone with even the slightest shred of economic acumen can think growing both spending and debt faster than GDP is a good idea. Further wondering if our actual Federal Debt to GDP ratio is 106%, 146%, 374% or 1,400%. And finally wondering – in the face of this madness – how I’m still having more fun than anyone else I know.