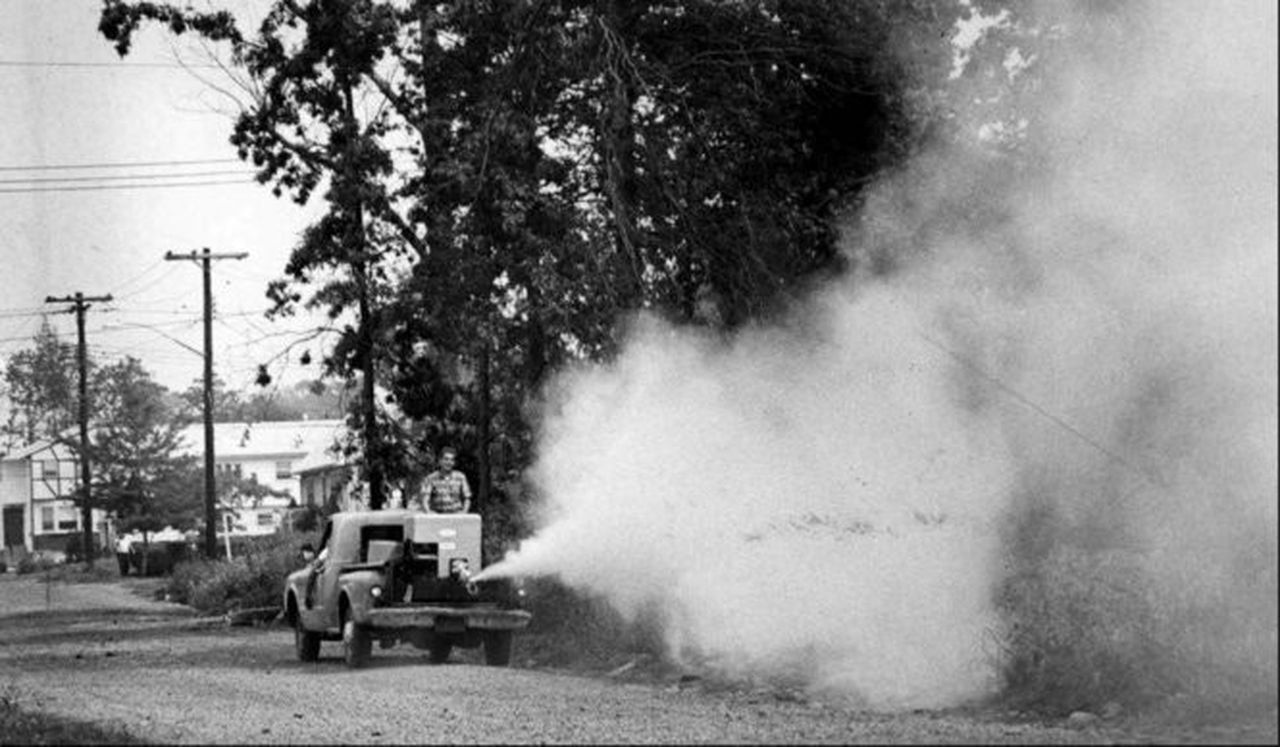 Anyone else remember running through the DDT cloud from the mosquito man’s truck?

Like many, I get quite a few invitations to connect on  LinkedIn. Just last week, I got one from a guy whose profile headline is, “A preeminent expert in leadership development through inclusion.”

Bullshidology, by the way, is the science concerned with gaining an understanding of the degree to which any given individual’s pronouncements are valid.

Look… I have no idea who this guy is. Never heard of him. Don’t know how much he knows about what. But there’s this thing about the designation “expert.” If somebody tells me that so and so in an expert about some subject, I’ll give that person the benefit of the doubt. I’ll assume the person in question actually does possess a superior level of expertise on said subject.

If, however, someone’s self-description uses the term expert, all sorts of red flags go up and all sorts of bells and whistles go off. I’m immediately alert and suspicious. I classify people like that as insecure and/or overly impressed with themselves. I try to leave open the possibility that they actually do possess some expertise, but from the get-go I’m taking everything they say – everything – with a grain of salt.

I’m reminded of a truism familiar to us all. “The more I learn, the more I realize I don’t know.” In other words, when any of us learns something – anything – we’re always confronted with another question …or two …or three …or ten. I experience this phenomenon all the time. So do you. So does everybody. Here’s a modified version of that old saying… “The more expert I become, the more I realize how un-expert I am.”

The point is, “expert” is an ambiguous term. An example… I played some high school basketball. 25 years later, I became coach of my daughter’s 4th grade team. Those kids thought I was a basketball expert. Ha! Had I waited until she was in high school, her 11th grade teammates would have instantaneously realized that as a basketball coach, I’m a fraud.

Which leads to a deeper point. It’s NOT a question if one is or is not an expert. It’s not a binary thing. Expertise regarding any given topic falls along a spectrum. Let’s continue the basketball example. On a scale of 1 to 10, let’s say I have “Level 2” basketball coach expertise.  I’m good for the 4th and 5th graders. For a 6th grade team? Ahhhhhh… Not so much.

Somebody out there is THE most expert basketball coach alive. That person has “Level 10” basketball coach skills. Literally everyone in the world falls somewhere along that 1 to 10 continuum. Which leads to a still deeper and even more important perspective…

Most people are average. 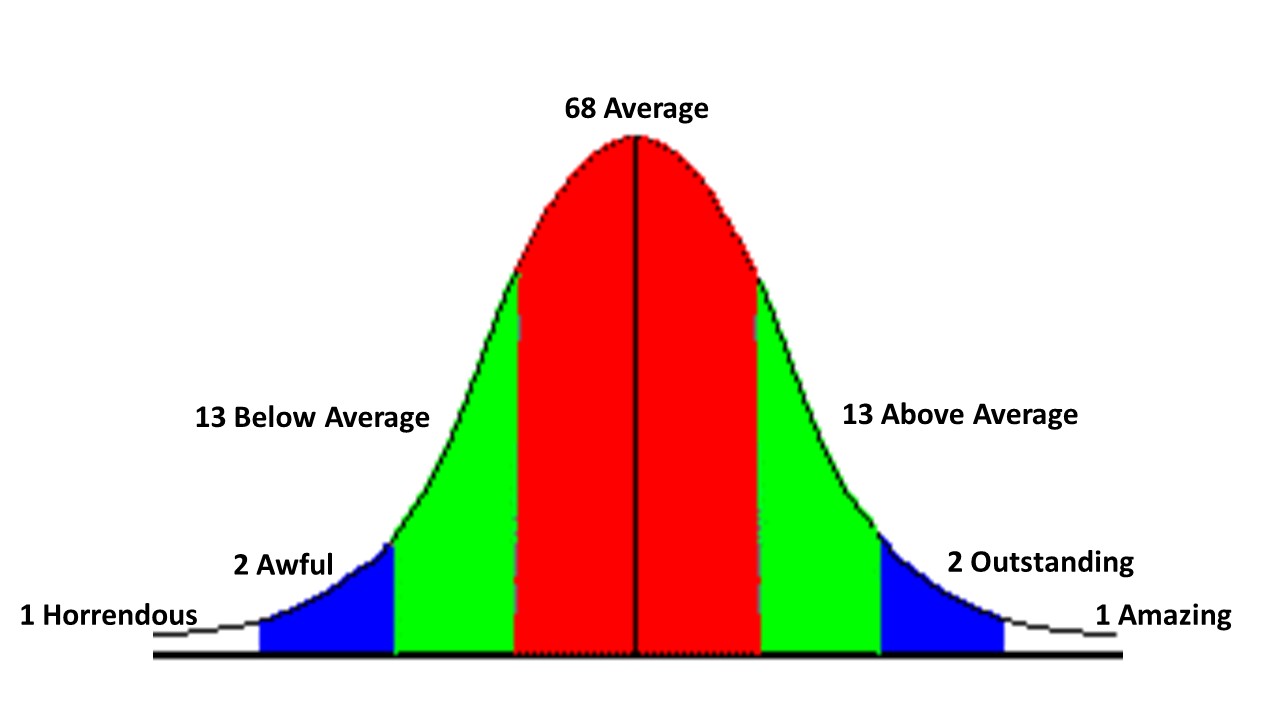 It’s easy to grasp by looking at the diagram, and I’ll also state all that in a simpler manner… Only 3% of people are legitimate experts at whatever it is we’re considering. 3%! A very elite group indeed! Only 13% are legitimately “Knowledgeable;” 32% are merely “Above Average;” 32% are “Below Average;” 13% are “Neophytes; and the final 3% are spectacularly incompetent – they’re “Ignorant.”

That brings me back to Bullshidology and basketball.

As a level 2 out of 10 basketball coach, I fall into the Neophyte category. Those 4th grade girls, however, considered me an expert, and compared to them, I was. As I reflect back, I remember a very vocal dad in the bleachers who turned out to be a level 3 – also a Neophyte. Suffice it to say I did not take kindly to his advice. While he did in fact know more than me, he didn’t really know what the hell he was talking about either. Only the 4th graders admired his “superior wisdom.” The 6th graders could easily see we were both frauds.

Let’s look at a different example. The insecticide DDT was invented in the 1940s and was a wildly successful insect control mechanism. It’s use, however, was pretty much totally banned globally in the early 1970s due mostly to the influence of Rachel Carson’s book, “Silent Spring” which was published in 1962. You’ve probably at least heard of that book, but do you know about any of the subsequent DDT research? Did you know that in 2002 the Centers for Disease Control, and in 2006 the World Health Organization both reclassified DDT as “mildly harmful” to humans and declared that it had more health benefits than drawbacks in many situations?

Now as a baby-boomer, I clearly remember chasing the mosquito man’s truck as he drove down my street. All we kids ran in and out of the billowing clouds of DDT-laced smoke. It was fun! None of our parents gave it a second thought. Should that practice be re-started in light of our present-day scientific expertise and knowledge? Of course not. …unless… What if there were a flood followed by a severe outbreak of zillions of malaria-carrying mosquitoes right here in Atlanta’s Old 4th Ward? Hmmmmmmm…

Do you see how this example raises two questions? First, which expert is the real expert – the one whose advice we should follow? And second, given what the real expert says, what do I do?

So what does my expert have to say about mosquito trucks? Is it absolutely never, ever again? Well, no… With an outbreak of a zillion mosquitos in a tiny geographic area, deploying a substance that is only “mildly harmful” vs. a massive malaria outbreak strikes me as a good idea. If it were only a half-zillion mosquitos across the whole city of Atlanta though, is it still a good idea? Or what about a quarter-zillion across the entire state of Georgia? Or a 10th of a zillion across the whole country?

Or what about the other expert who says we need to evacuate the area for 6 months, 3 days, 7 hours and 47 minutes? Or that other expert who wants to issue gas masks to all the residents? Or the expert from the pharmaceutical company who wants us all to take his new malaria drug?

Aiiieeeee!!!! Not only does the degree of “expert” fall along a continuum, like my 1-10 scale, it’s also clear that the correct answer to the question of what I should actually do is, “It depends.” It too falls along a continuum of choices. In this case I need still more experts to conduct cost/benefit analyses for mosquito trucks, evacuation procedures, gas masks and malaria drugs, and tell me what’s the best alternative.

I wonder what  “A preeminent expert in leadership development through inclusion” would suggest doing about the mosquito issue. Does expertise in one domain imply expertise in all domains? Or just that one? Or in 7 others? If so, which 7?

Let’s look at yet another aspect of the science of Bullshidology.

You’ve probably heard the old joke about decision-making… “In God we trust, everybody else needs to bring data.” “The numbers don’t lie,” say the data analysts. “Figures lie and liars figure,” say the sceptics. Who’s right? How about we look at an example?

Congress enacted an “Assault Weapons Ban” in 1994 that expired under its 10-year sunset provision. Did that ban reduce shootings? “Absolutely yes,” says Robert Reich, economist and former Secretary of Labor. Analyzing a massive data set compiled by Mother Jones, he calculated that gun massacres dropped 37% after the ban went into effect.

Guess what the National Rifle Association discovered by analyzing the exact same data… They found that “the Federal Assault Weapons Ban had absolutely no impact on mass killings in the U.S.”

I’ll tell you how. Reich used the terminology “Gun Massacre,” defined as 6 or more people killed in a single incident. Gun massacres, as defined by Reich, did indeed drop by 37%.

The NRA, on the other hand, used the term “Mass Killing” which is the official federal government definition that is enshrined in legislation by act of Congress, as 3 or more people shot and killed in a single incident. Using that definition, the assault weapons ban did indeed have no impact whatever.

So who’s right? Who’s the more expert data analyst? Reich or the guy from the NRA? Or wait a minute… One’s a politician and the other makes his living as a gun rights advocate. Neither of these guys is a legitimate data analysis expert! Might they merely be exercising their Bullshidology skills? Are they merely Bullshidders?

The real lesson here is that the answer to virtually all questions is, “It depends.”

I’m your Intentionally Vicarious host Todd Youngblood – Urging you to enhance your knowledge and skills in the field of Bullshidology. Take the fundamental precepts of the science seriously.

Remember… The true challenge in making an informed decision is accurately deciding which “expert” or “experts” from which field or fields of study to believe. Somebody please teach me how to do that. I’m too busy having more fun than anyone else I know.