I’ve debated with myself on the sentence I should use to introduce the core idea of this episode. I see two choices:

Without a doubt, the United States today is awash in terrible problems. So is the rest of the world. I don’t need to list them. Read and/or listen to and/or watch whatever news outlets you prefer and you’ll read and/or hear and/or see a litany of examples.

As I reflected on the news I’ve consumed over the past several years, it became crystal clear which version was more appropriate. It also became clear that I needed a two-sentence introduction. Here it is…

The world is going to hell in a handbasket? How can you possibly be so ill-informed?

As I said earlier, yes, the U.S. and the world are awash in terrible problems. I make exactly zero bones about it. OK. So what else is new? I’ve read a lot of history in my 60+ years, and all of it has been a direct reflection of the news we all read, hear and see every day.

One group of innocent people rails against the depredations of another group of evil people. One oppressed group attacks another privileged group and takes not only their stuff, but also assumes dominion over their territory. Some poor slob falls victim to a freak accident. Mass numbers of people get infected with and die from some unknown, hideous disease. There’s a drought, or locusts or murder hornets or some other natural phenomenon that kills huge numbers of people. Some [INSERT RACIAL, ETHNIC or RELIGIOUS DESCRIPTOR HERE] individual randomly kills an innocent [INSERT DIFFERENT RACIAL, ETHNIC or RELIGIOUS DESCRIPTOR HERE] bystander.

Re-read the last paragraph. Am I referring to some point of time in the distant past? The not so distant past? Yesterday? The answer is, “Yes.” The sentences obviously apply to both.

To ask if the world is awash in problems is asking the wrong question. To ask, “What will I do today to alleviate problem X?” is a vastly better, more useful, more intelligent question. Fortunately for all of us, lots and lots of people have been asking that question throughout all of human history.

We are now living in by far the best times ever. I will now proceed to provide evidence.

The chart that follows is literally my #1 favorite. 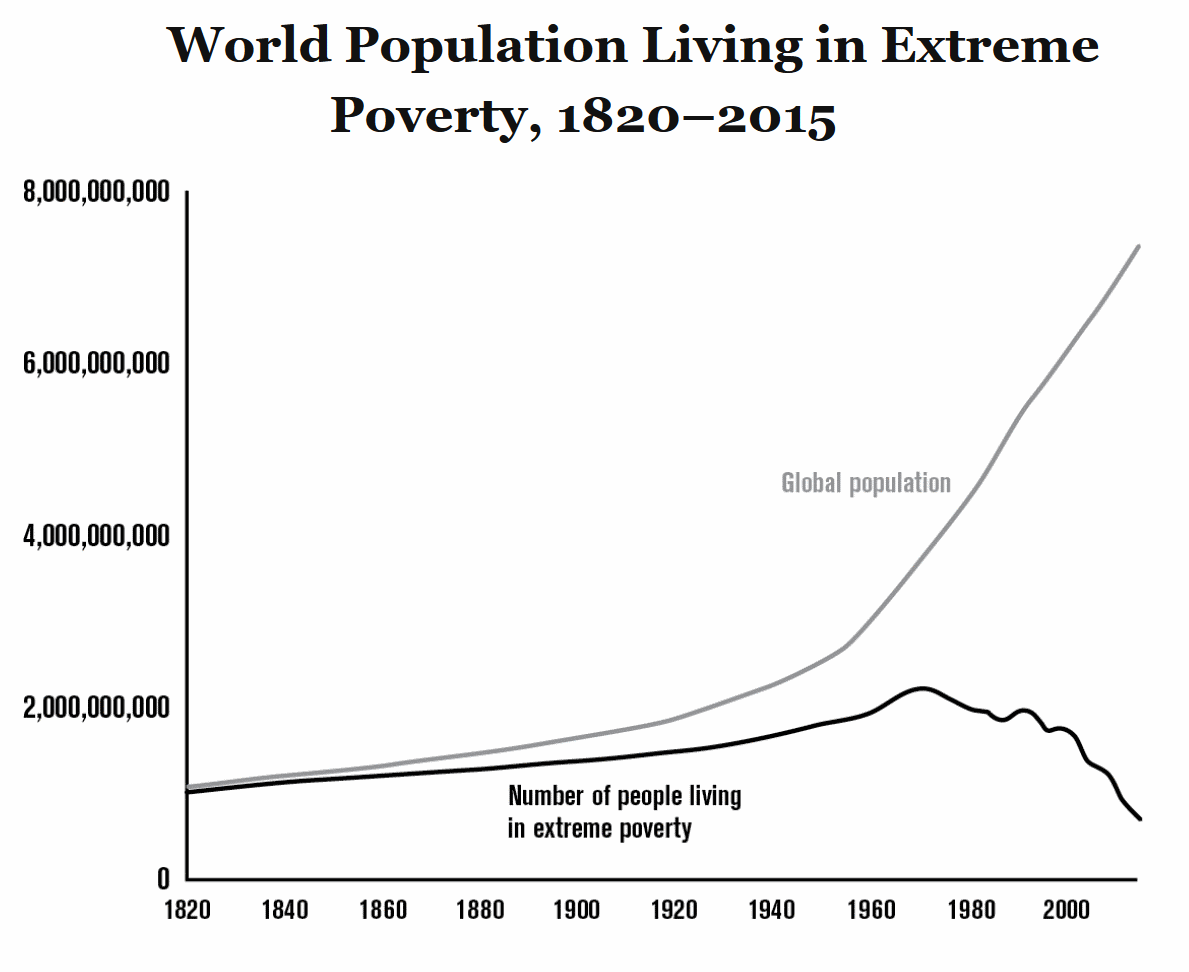 Yes, of course it’s awful that 720 million live at a subsistence level. That’s why we need to continue on the trend that began around 1970 when the percent of world population living in abject poverty began to drop precipitously.

[And as a side note… You like to berate the “horrible, awful baby-boomers” who have screwed up the world?  When did the total number of people living in abject poverty start to decrease???  Right around 1970, Right around the time we boomers came of age and started running things.]

OK, stick with me as I provide another 32 indicators that the world is relentlessly becoming a better place. 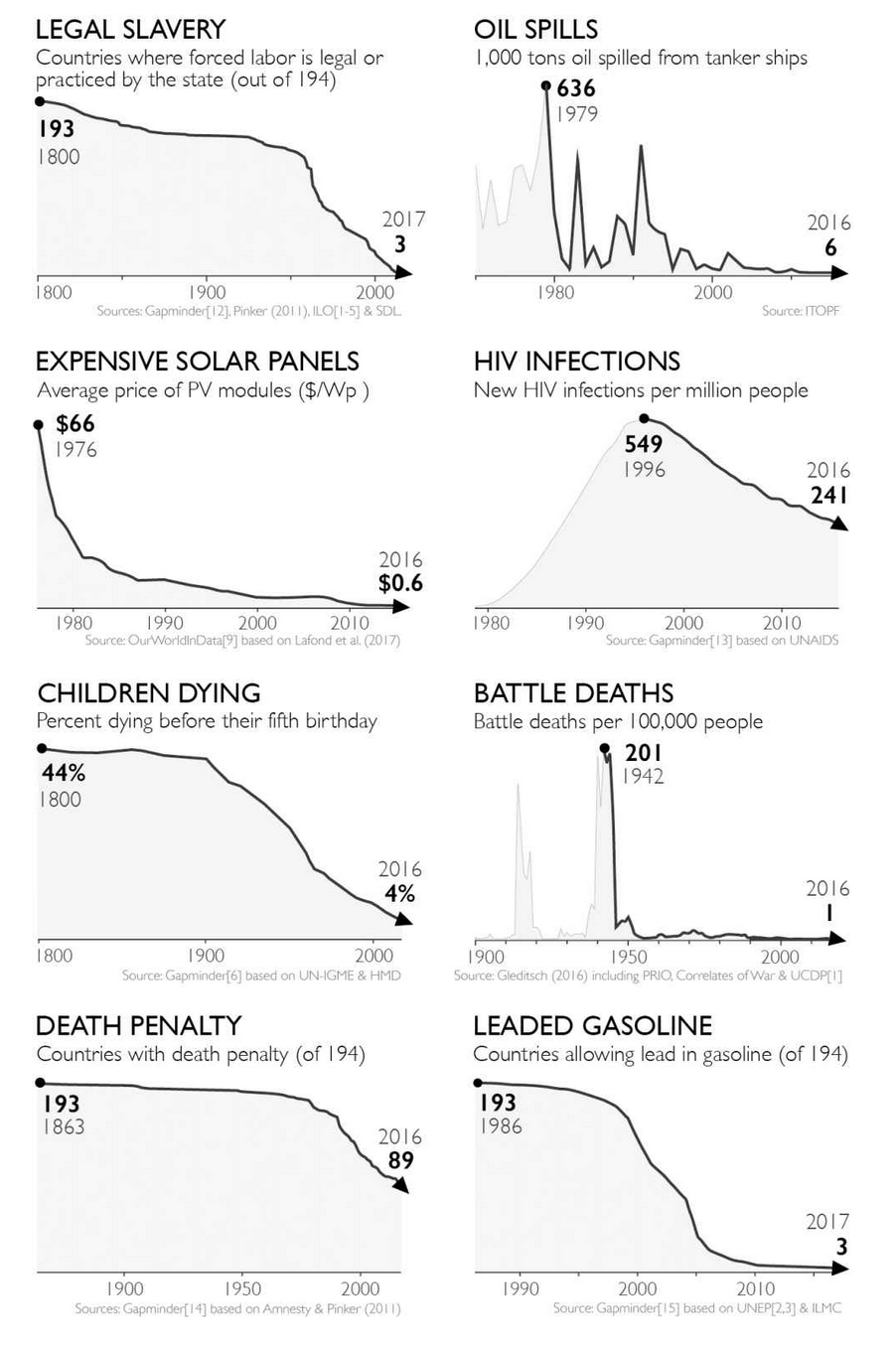 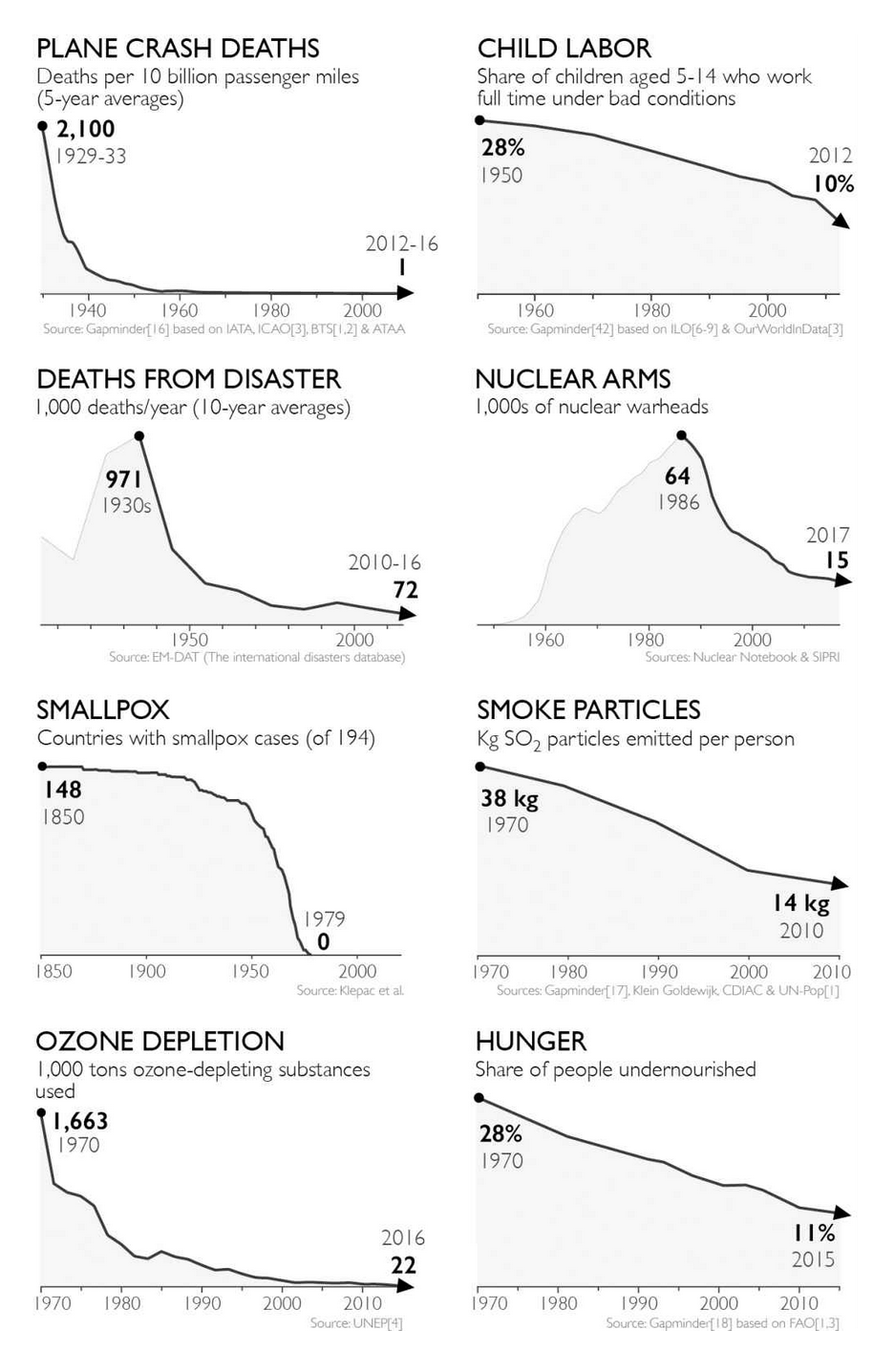 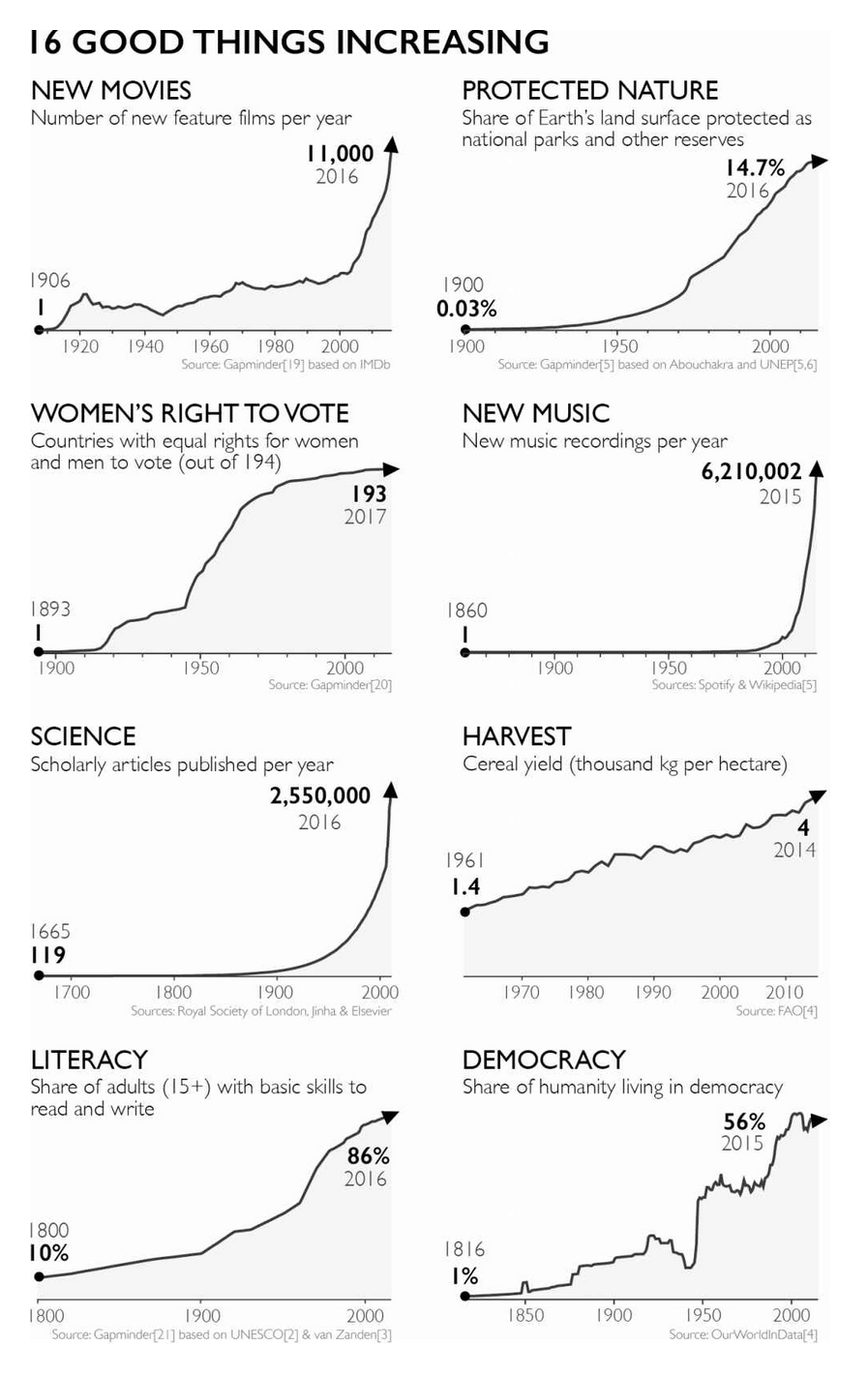 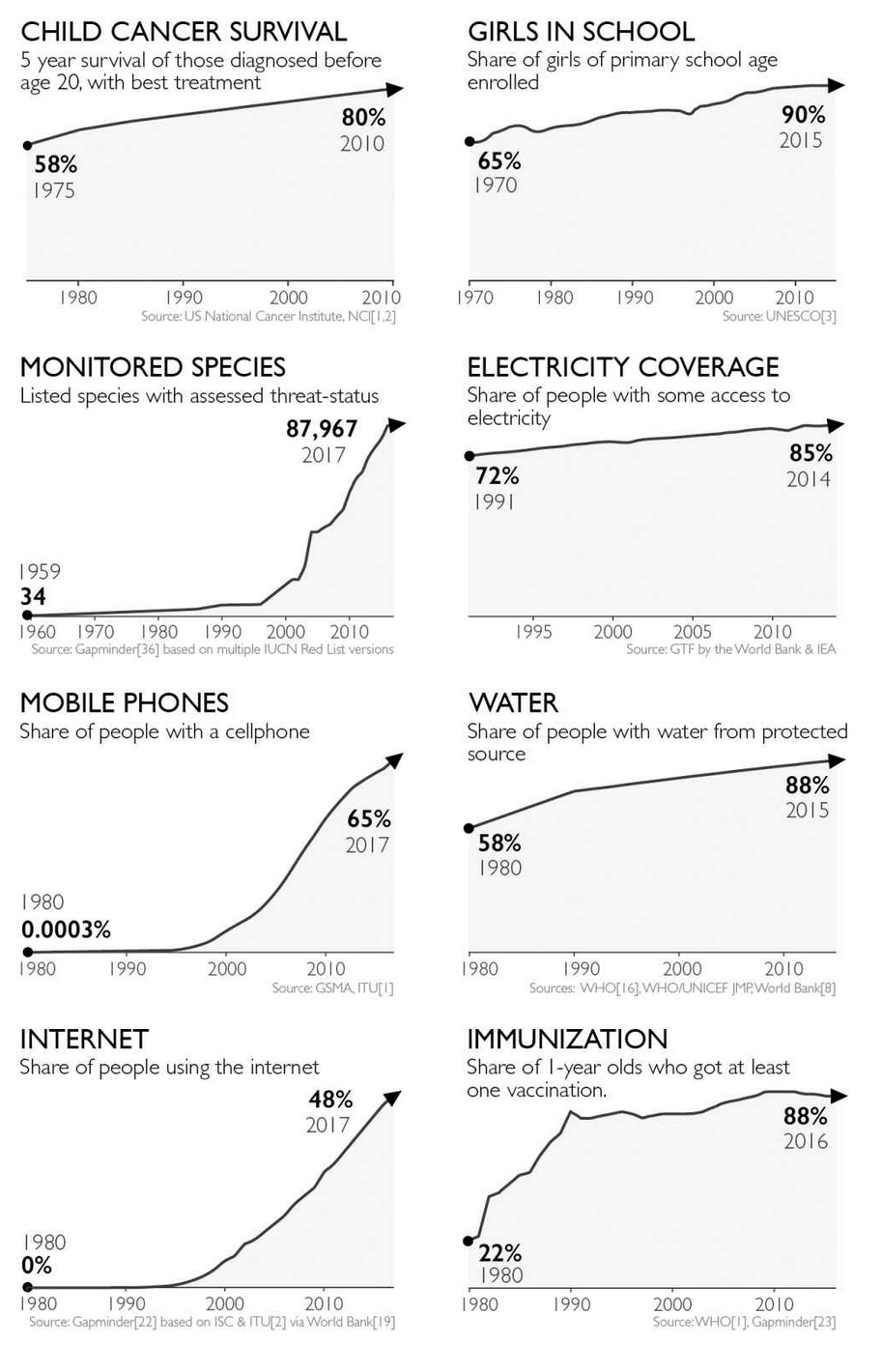 Feel like I’m beating you over the head with good news? Good! I sure hope so. For your own sake and sanity, keep this collection of data sets handy. Better yet, get yourself a copy of Factfulness: Ten Reasons We’re Wrong About the World–and Why Things Are Better Than You Think

. It not only has all the data, it also has an outstanding collection of hints and tips regarding how we perceive the world around us.

m your intentionally vicarious host, Todd Youngblood – Well aware that the world is awash in problems. Also aware that we as humans have made and continue to make astonishingly wonderful positive progress. Further aware that we as Americans have been at the forefront of much of that progress. And finally grateful… that my family, friends, neighbors, community, colleagues and fellow citizens are, at the end of the day, contributing to even more progress. How could I possibly NOT be having more fun than anyone else I know?