…and a Septuagenarian Bicycle Guide

By Todd YoungbloodJune 21, 2019Uncategorized
No Comments 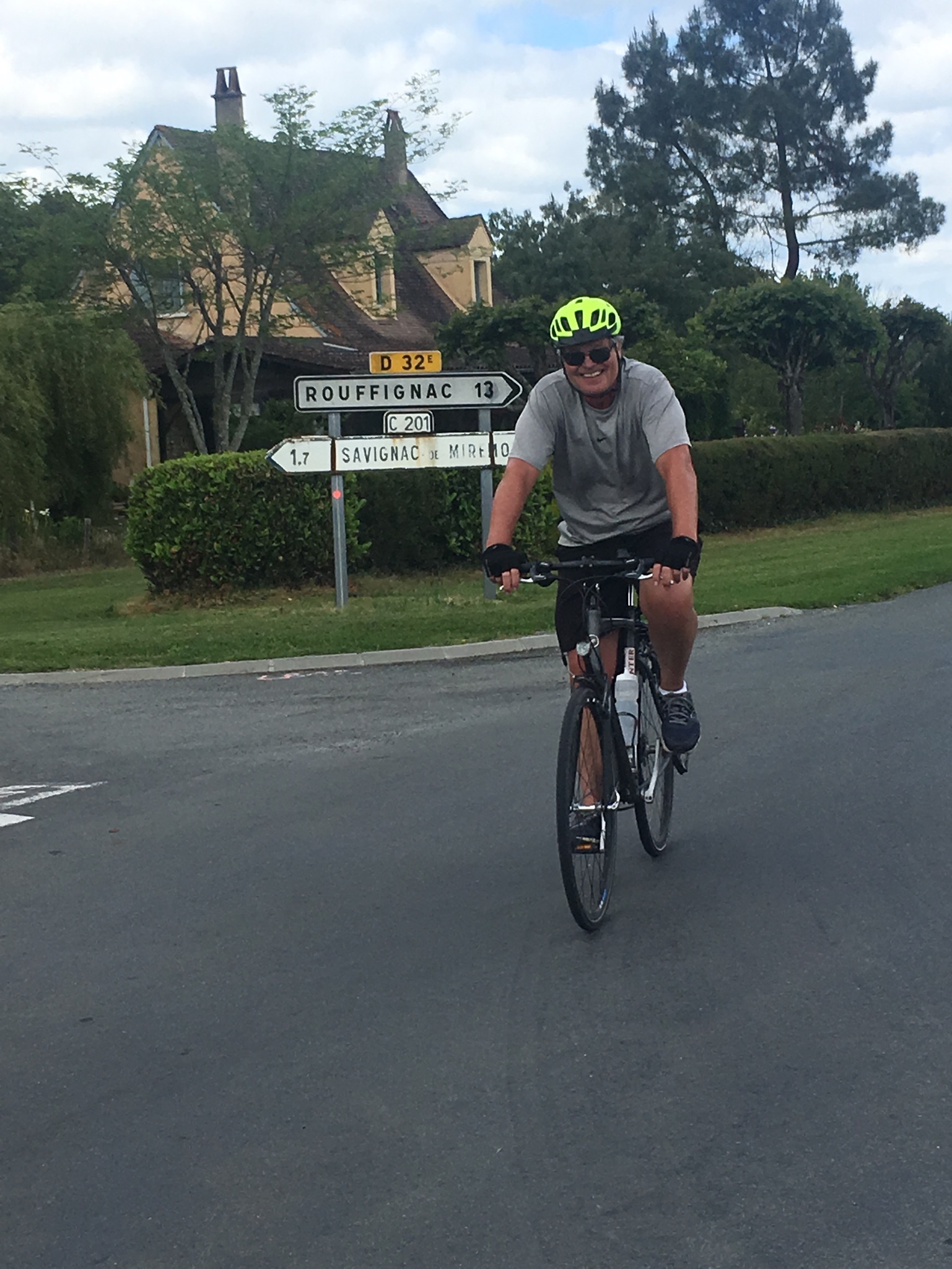 Bicycling in France and having more fun than you!

It’s not unusual for me to get a quizzical look or a blank stare when I talk about my annual bicycle trip. For me, 10 days pedaling around some European countryside is downright glorious! Now bicycling that much – on another continent no less – may or may not be your idea of having more fun than anyone else you know, but that’s not the point.

For me, it IS having more fun than anyone else I know.

While you might not want to do so yourself, you do – in my humble opinion – need to do something that’s equally effective at providing not only a vigorous daily workout, spectacular scenery, excellent food & drink all accompanied by interesting conversation on a crazy-wide range of topics with your cohorts, but also easily provides a year’s-worth of stories to tell that perhaps earn you those quizzical looks and/or blank stares, or, if you’ve done it right, a genuine acknowledgement that you truly are living large.

I did an episode about my bike trip to The Netherlands last year. Check it out here. Rather than repeat the major themes I touched on there, I’ll dig deeper into one of them that really resonated in my brain during this year’s foray into the Dordogne department of southwestern France. Think “Bordeaux” if you’re not familiar with where that is.

And for the record, yes, a considerable volume of the local wines were consumed, but that is a story for another day.

Anyway, it’s the additional insight I feel I got into how and where I fit into this world of ours that stands out to me this year. Specifically, three things:

On to technology… Go visit La Roque Saint Christophe and the caves of Lascaux, and the magnitude of the massive technological advances we’ve made vs the minuscule – if any – intellectual jumps we humans have made smacks you right upside the head.

Some background… Anthropologists and paleontologists generally agree that Homo habilis, the first in the evolutionary lineage of the Homo genus first lived about 2 million years ago. Primitive Homo sapiens – our own genus and species – first showed up about 350,000 years ago, and modern humans – taxonomically classified Anatomically Modern Humans, have been around for about 50,000 years.

There is tangible scientific evidence that the cliffs and caves of La Roque Saint Christophe were inhabited by Homo something or another from around 1 million years ago through the late 1500s. Let that sink in for a few minutes… The place’s usefulness as a city was only at about its midpoint when the Neanderthals finally showed up! .

Now here’s the part that really warps my brain. And it’s directly related to this “Anatomically Modern Human” thing. Physically and intellectually, the folks living there in 500 BC were no different than my bicycling group – or you! The only real distinctions are knowledge and technology. They were just as smart as us, but the only knowledge they had was from direct, personal observation, and their best and most advanced available technology was a chunk of rock. That caveman who threw rocks to kill his dinner could easily have learned Python, C++ and JavaScript and program up a storm if only he had the benefit of 500 more centuries of knowledge accumulation and technological development!

That perspective makes the cave drawings at Lascaux all the more fascinating. They were created relatively recently – “just” 17,000 years ago. By then, enough knowledge and technology had been accumulated to enable production of lasting representations of abstract ideas. I doesn’t take a great leap of imagination to conclude that the Lascaux artists of 170 BC could easily find work today in the interior decorating industry.

I hate to be repetitive, but I’m absolutely blown away by the notion that folks just like me – like you – like us – lived, learned and strived for a better life literally tens of thousands of years ago. It’s only our accumulated knowledge and technology that makes us the least bit different. 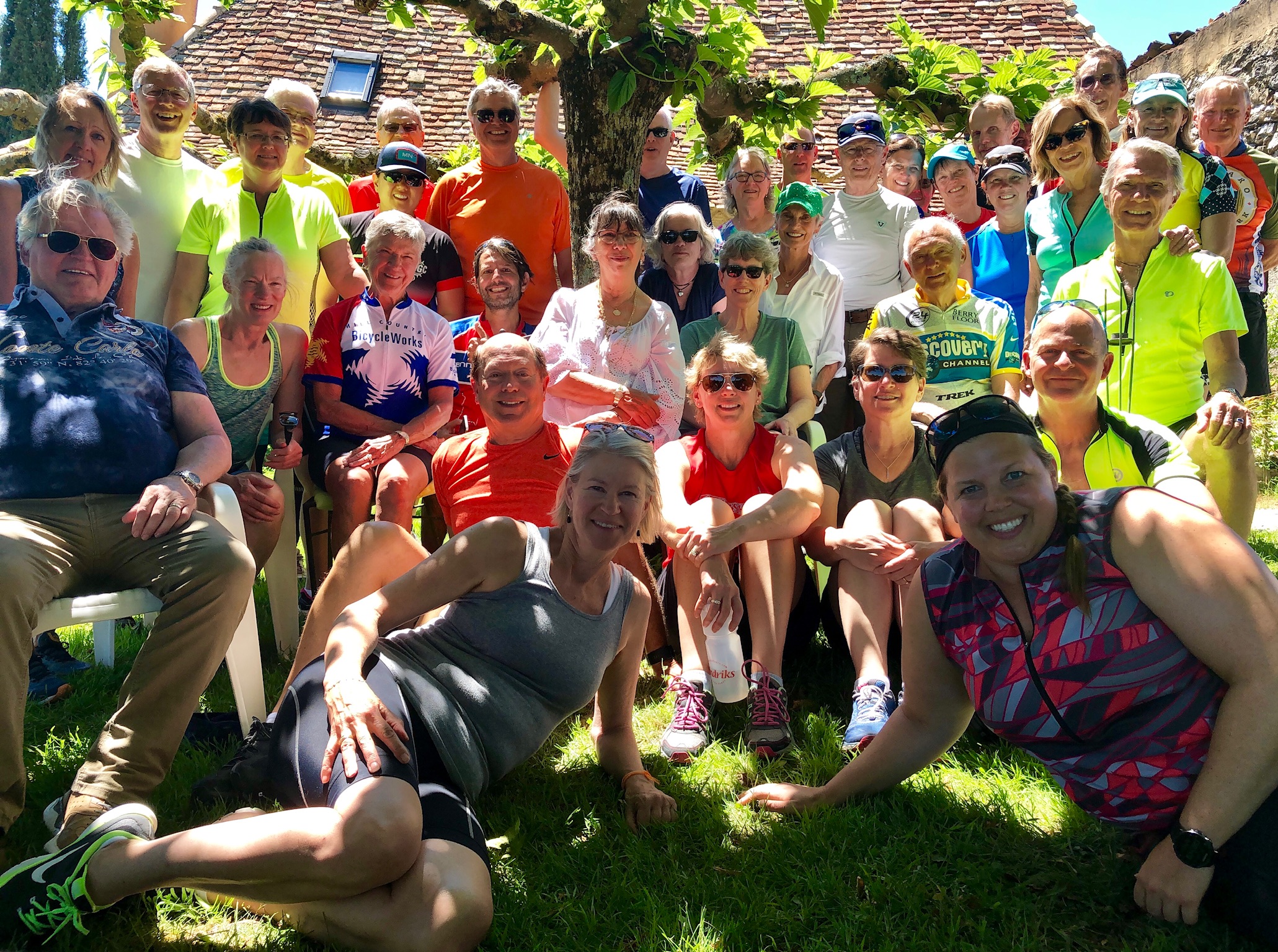 Which leads me to my second point… The undeniable fact that we don’t know how good we have it. In fact, we are utterly clueless about how good we’ve all had it life-to-date, still have it, and will continue to have it. Do yourself a favor, by doing three things:

There we were – a bunch of sweaty bikers after the day’s ride around Monpazier in a hotel courtyard downing a few cold beers… David, one of our bicycle guides who was born in what was then Czechoslovakia and now lives in Innsbruck Austria, was sharing a story about his 10-year-old self. He wasn’t personally aware of just how much life sucked in Czechoslovakia under Soviet Communist rule, but his parents were. And when they informed him that they, he and his younger brother and sister were going on a hike in the winter of 1982, he was excited about yet another adventure.

Things started out just great, but after a few hours clomping uphill through the snow, it got old. Imagine yourself on a trip with three little kids all of whom want to go home NOW!  But no… More and then still more uphill clomping through the snow. Were the kids impressed when Dad pointed out the stone marker at the Austrian border? Nope. Who cares about a rock sticking out of the ground when you’re wet, exhausted, bored to tears and vaguely realize that you’re probably less than half-way through this endless hike? 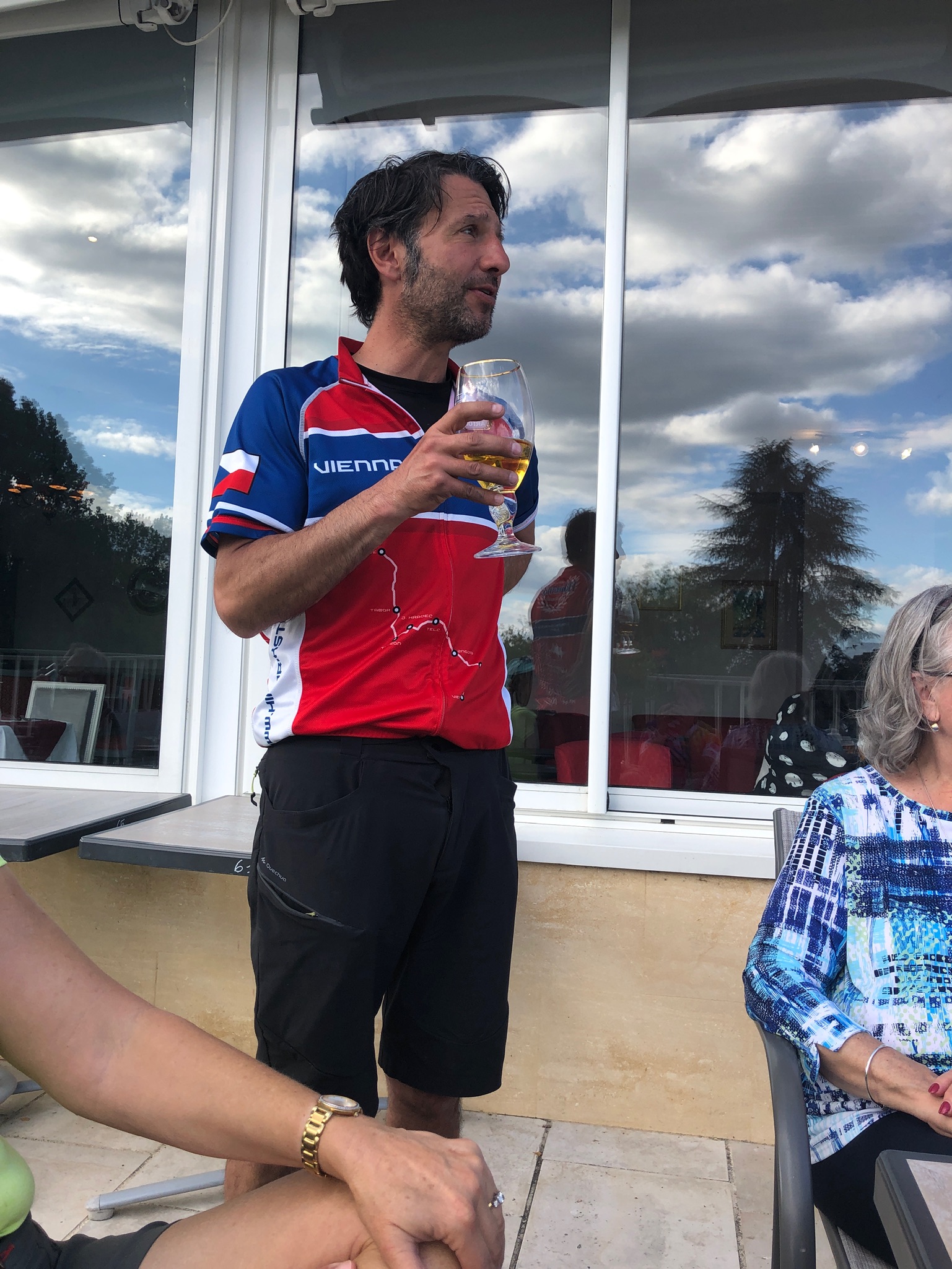 So on they clomp. Until they got to a really steep downhill part. Not giant cliffs, but cliffs nonetheless. So Dad lowers the kids down on a rope. At this point, David paused and admitted, “That was fun!” Eventually, after considerable additional clomping and much additional whining, they arrived in a small Austrian town and were met by a colleague of their Dad who got them on a train bound for the other side of the country. In other words, as far away as possible from the Czechoslovakian border.

Now stop and think about your own trials and tribulations… Then think about leading your family of 5 – on foot – in the snow – over the mountains – under threat of arrest – out of your home country which was horrendously screwed up and oppressed by Soviet Communists. Frankly, I have a hard time getting my head around that. I’ve never been in such a lousy situation.

And there sits, David, the WanderMeister, grinning, sipping his beer, and in his own placid, friendly way challenging us to pedal up that next hill just a little bit faster. You might want to think about joining him on one of the mountain hikes he leads. (Check out the WanderMeister web site!) 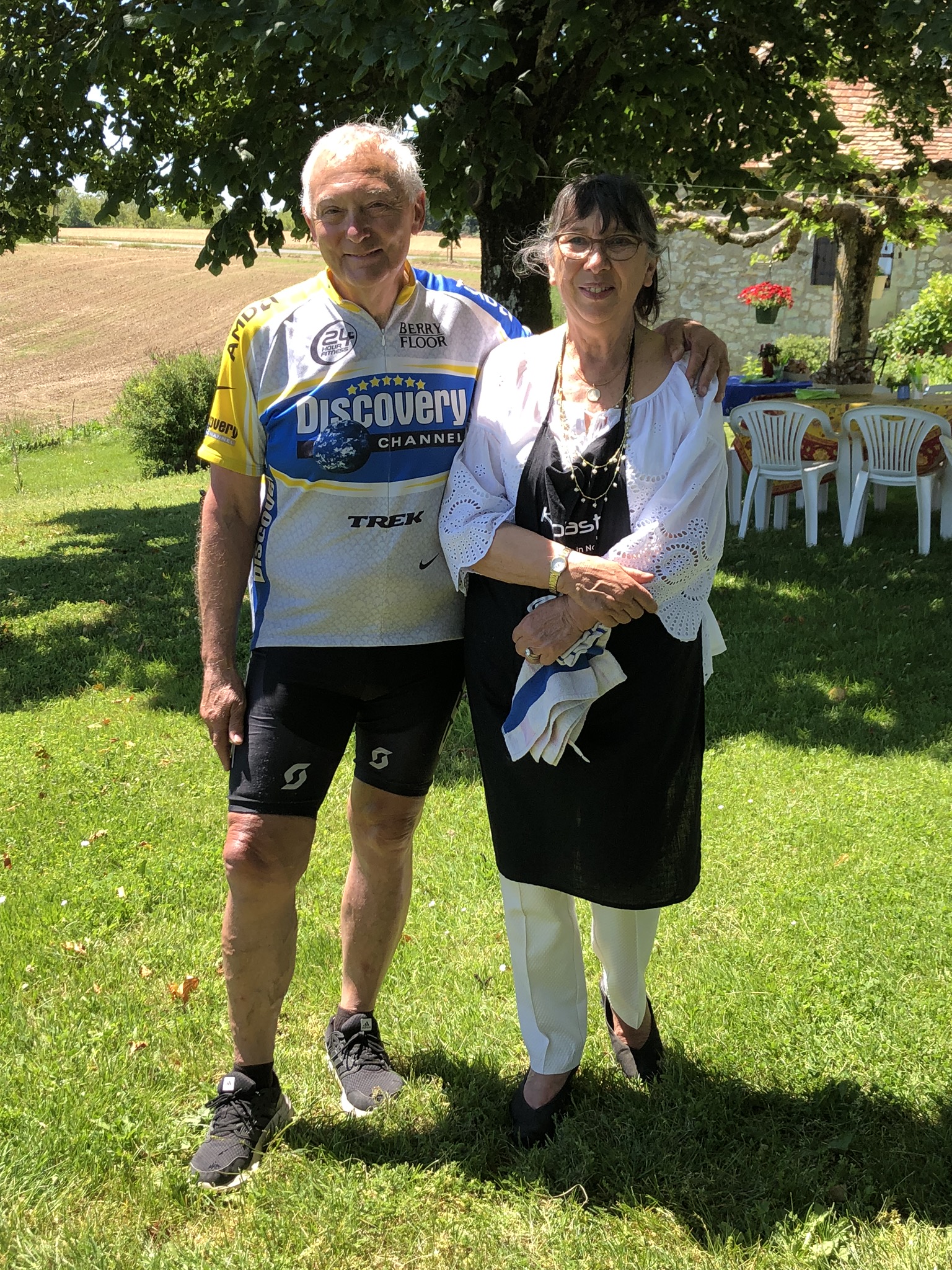 Joie de vivre in the flesh!

And now on to my final point… the undeniable fact that “Joie de Vivre” is right there in front of us all, ripe for the taking. Just in case you’re not familiar with the French expression… Wikipedia defines Joie de vivre as a cheerful enjoyment of life; an exultation of spirit. Nobody I know exhibits this better than Colin, another of our bicycle trip guides. I met this Englishman turned Frenchman on my first bike trip eight years ago in Ireland.

Take a look at the photograph of Colin with his wife Betty. Take a look at the photograph of their picture postcard perfect 250 year old house in the French countryside. Think about this European couple happily hosting 30+ tired, smelly Americans for a picnic lunch in their own back yard. And most importantly, think about a 75 year old guy bursting with enthusiasm at the prospect of guiding us again next year.

THAT, my friends, is Joie de vivre!

So to sum up… With our 50,000 year legacy of knowledge and technology accumulation, I get a glimpse of how far we humans have come and how much farther we’re likely to go. I’m humbled at just how good we have it compared to our ancestors of 2, 200 and 2,000 generations ago. And I’m profoundly grateful for the opportunity for so much more cheerful enjoyment of life and exultation of spirit that’s staring me in the face. 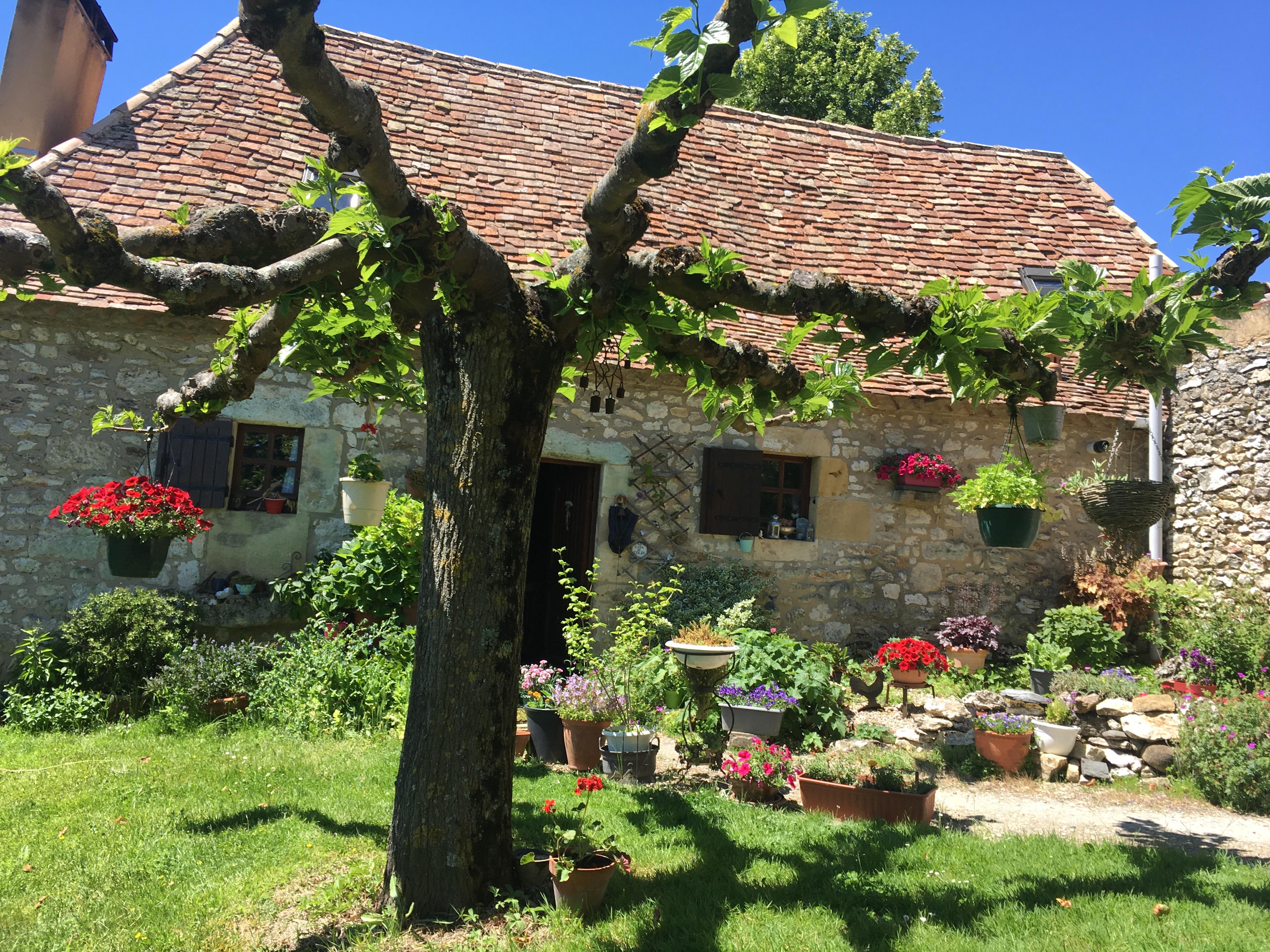 I’m your Intentionally Vicarious host Todd Youngblood – Already anxiously anticipating the 2020 bicycle trip in Germany with Herman, the Boss, Theo, the Manager of Logistics, the rest of the Hindriks Bicycle Tours team and all my bicycling buddies… Still pumped about this year’s trip in the Dordogne… And of course, still having more fun than anyone else I know.