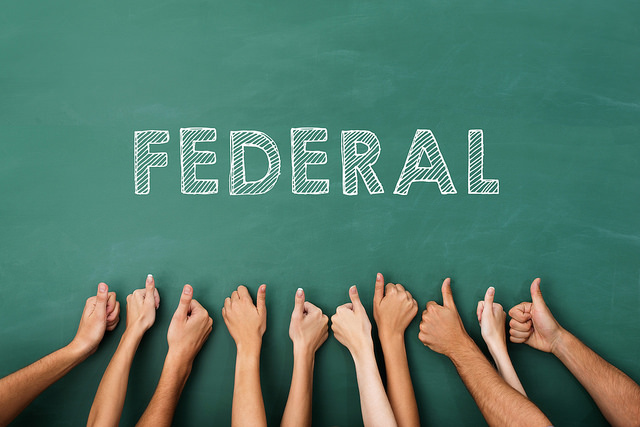 “Federal” means MOST power resides with the people and the states!

For context, it’s important to recognize that Tip O’Neill was in fact correct for his time. The political system laid out in the Constitution was, and more significantly still is, very purposely state and local focused. Up to and well beyond 1789, into the 1950s, the states were the centers of virtually all political activity. When he was first considering a run for the Presidency, Dwight Eisenhower noted that, “There is not one Republican Party, there are 48 state Republican parties.” (At the time Alaska and Hawaii were not yet states.)

So between 1950 and now did politics really totally flip from local to national?

Yeah. It did. And it started because of TV. Since the expertise needed to produce a high quality, daily TV news show was extremely scarce in the 1950s, and the cost was extremely high, it made perfect sense to produce just one show that could be used everywhere. A small number – literally 4 – national TV networks each did exactly that. National News became a “thing” that everybody could easily access every day and everybody loved it.

Demand for national news in fact, was HUGE. The advertising-funded networks quickly discovered that they could pretty easily get more and more sponsor money by producing more and more hours of it with better and better quality. Competition among the networks for the ad cash intensified – which resulted in even more and better national news – which attracted even more money – which generated even more competition – and over time more competitors – and the cycle continued..

Then, in the early 90s, the internet happened. Today, literally anybody can publish national news. The demand for national news and accompanying political commentary continues to grow unabated. Meanwhile back at the ranch… Demand for state and local political news and commentary plugged along pretty much unchanged. Relatively speaking, nobody much cares about the local stuff.

So what impact did all this have on the political class?

The Washington Post recently did some very specific research on that question. Their reporters recently attended 10 separate meetings involving members of the U.S. House and Senate. In total, more than 160 questions got asked. Good questions too; not mindless ones. How many were focused on local issues? Eleven. Eleven out of 160. More than 93% of the questions asked were with regard to some national or international issue. It was all stuff like Russian collusion, what’s next with the Affordable Care Act, the impact of “fake news” on the President and the like.

In the 2016 Republican primary, Ted Cruz spoke out strongly and viscerally against federal subsidies for ethanol which is primarily produced from corn. And he did so in Iowa – Corn Country Central! – where more corn means more money – lots more money – for the locals. Did they punish Cruz for his anti-corn-ethanol rhetoric? Nope. He won handily anyway. A GIANT state issue DID-NOT-MATTER. Ya’ think Ole’ Ted’s gonna’ stay nationally focused?

A study conducted at the George Washington University, found that 99 percent of respondents in a typical media market never visited websites dedicated to local news. Across the country, fewer than 20% of voters turn out for local elections.

So the bulk of the political news you, me and we consume and/or are exposed to is dedicated to the 1/10 of 1% of the total number of politicians – the ones who comprise the federal government.

And what did all this do to the 50 distinct, state-by-state parties of Democrats and Republicans that Eisenhauer mentioned? Well… It didn’t kill them, but it did morph them into clans of worker bees who don’t think, but instead merely execute plans developed by the national organizations. There is one, monolithic Democratic National Committee and one, monolithic Republican National Committee. These two groups orchestrate everything.

, notes that there is little to no variation in party platforms state-by-state. They’re all pretty much the same everywhere with very little differentiation. That means all the candidates everywhere are all preaching the exact same things. All the candidates start to look and sound the same, and they’re all focused on the national scene.

Admit it… When you’re in the voting booth and have or have not thoroughly studied the issues – or even the candidates – you vote pretty much based on how much you love or hate the President and your own Federal-level party leaders don’t you? You vote based on one of the only two available political doctrines – the red one or the blue one. It’s all about partisan combat, and all the battles everywhere at every level of government use one of the two available sets of nationally-focused weapons and tactics.

It’s shutting down the “Laboratories of Democracy.”

To be perfectly clear… Political reality in the United States took a decided turn away from a state & local focus to a national focus in the 1950s. With the dawn of the internet, the speed of the move toward the national increased, and continues to increase at an increasing rate. The Laboratories of Democracy – the states – are rapidly becoming less and less politically relevant. More and more power and control over our daily lives is continuously being sucked up into the centralized entity that is our Federal Government.

The Founding Fathers would be horrified. Louis Brandeis, a Supreme Court Justice, reiterated their core philosophical belief in state and local political focus in 1932:

“Denial of the right to experiment may be fraught with serious consequences to the nation. It is one of the happy incidents of the federal system that a single courageous State may, if its citizens choose, serve as a laboratory; and try novel social and economic experiments…”

But the states don’t do much of their “Laboratories of Democracy” duty any more. The Feds continue to pursue their long-standing strategy of whacking away at the notion of limited central government that the Founders held so dear. And they pursue it – for the most part – in a very stealthy fashion – in small steps slowly taken so nobody really notices.

The last time The Feds executed an overt big power grab was back in 1913 with the 17th Amendment. That’s when the states got stripped of their power to elect Senators; a power specifically granted to them in Article I of the Constitution. Why 36 of the then 48 states went

along with this makes no sense to me. It was a really bad move. (Read more about how negative a thing the 17th amendment is here:  I Don’t Much Like the 17th Amendment Either.)

And I fear we and our state legislatures might get duped into allowing – even enabling – additional big, overt Fed power grabs. Like abolishing the Electoral College. for example. (Read more about why that’s a dumb idea here.)

Is it totally inconceivable that the Feds take a run at abolishing the 10th Amendment?

You remember that one, “The powers not delegated to the United States by the Constitution, nor prohibited by it to the States, are reserved to the States respectively, or to the people.” Will they really do that? Or will the Feds stick with their typical and more insidious stealthy measures to suck up more power, control and money?

And one final thought for you to consider…

We’re bombarded with the concept – especially by the left – that diversity is a good thing. I agree, by the way. Immigrants, for example, bring with them a diversity of ideas and perspectives that have great value to our melting pot of a nation. Ditto for racial minorities, LGBTQs, Muslims, Jews, Evangelicals, Atheists, etc., etc., etc. Diversity IS a good thing.

So why is a great diversity of Laboratories of Democracy – say like 50 of them – NOT a good thing?

I’m your Intentionally Vicarious host Todd Youngblood – Totally convinced that We The People need and want more, bigger, badder Laboratories of Democracy. That movements like ConventionOfStates.com deserve our serious attention. And that all of us need to stay focused on having more fun than anyone else we know.