Abolishing the Electoral College is a Stunningly Bad Idea 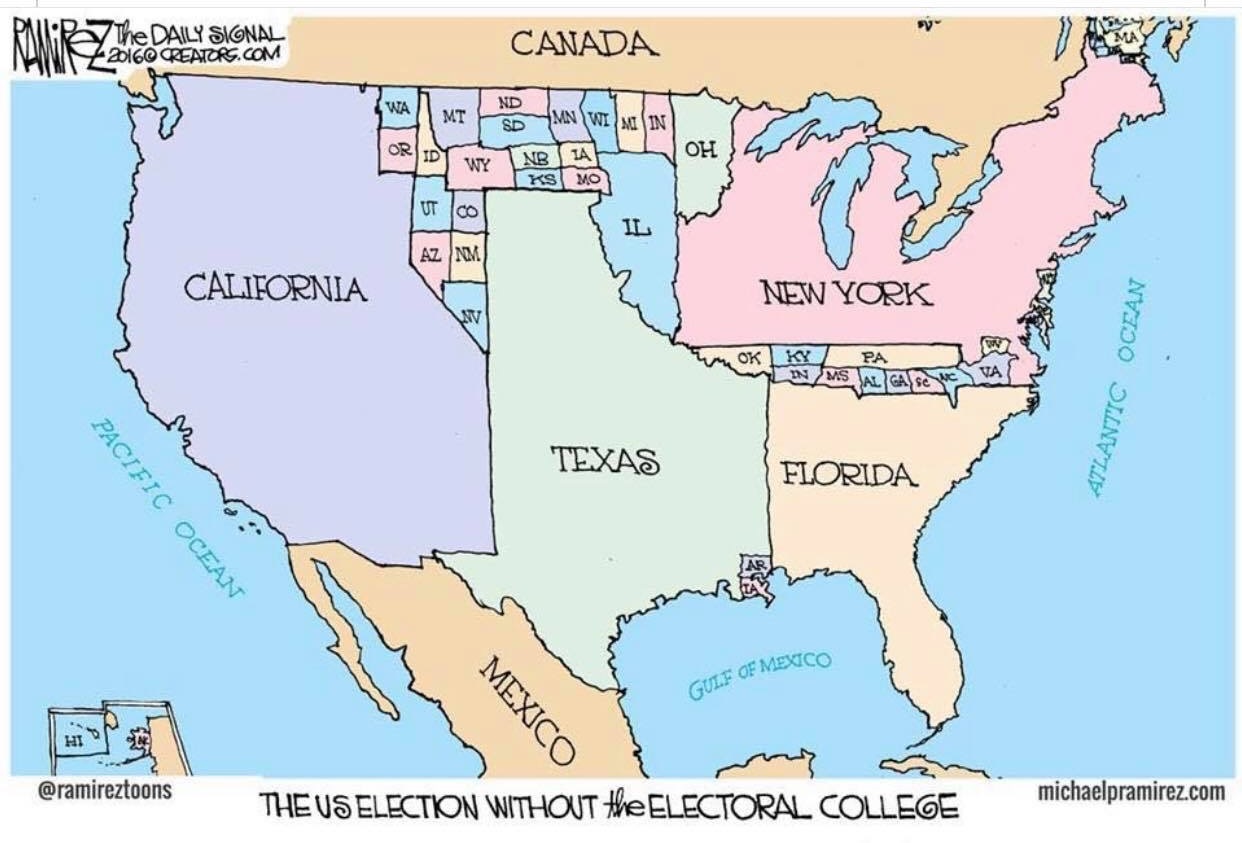 Once upon a time, there was a fishing boat. 23 people worked that boat, including the skipper and crew. They all got along well, were quite successful and had created a solid, sustainable lifestyle.

A ways up the coast, there was another ship. It was a significantly larger vessel and was engaged in moving cargo. It’s crew, officers and captain, totaled 447 souls. They too, all got along well, were quite successful and had created a solid, sustainable lifestyle.

As it happened, most of the people on these two ships all knew one another. They also had a least a casual relationship with crews from 11 other ships that were all engaged in wide variety of maritime businesses, and size-wise were all somewhere in between the two I just described.

As the conversations among these 2,000 or so sailors continued through the years, it became fairly clear that if the 13 ships all banded together into a fleet of sorts, all could benefit from sharing knowledge and resources. They could help each other find new customers. Very significantly, knowing the dangers of working at sea, they could all watch out for each other, and provide aid and assistance when one got caught in a bad storm or fell into some other sort of trouble.

The idea caught hold, and pretty soon representatives from each of the 13 ships were meeting to hammer out details of how the new fleet would cooperate. Everybody immediately agreed that fairness was paramount. Democratic agreement on rules, regulations and dispute resolution seemed like the obvious best structure, so…

The idea of democracy caught hold as well, until…

…the representative from one of the smaller ships realized that more than half of the fleet’s total crew worked on the 4 largest ships, all of which were involved not in fishing, but in moving goods from one port to another.

He wondered what would happen if the fleet took a democratic vote to say… promote safety. Worn cargo nets are a real hazard and early detection of wear prevents accidents. Ergo, the fleet might decide to require a full time cargo net inspector on every ship. The 5 smallest boats were exclusively dedicated to fishing, and among them possessed exactly zero cargo nets. For them, an inspector would be a significant expense with literally and exactly zero value.

What else might get democratically voted in? A pure democracy would leave the small boats utterly powerless and totally at the mercy of the whims of the big boats. The crews, captains and officers of the small ships resoundingly said, “No thank you!” to the fleet idea. The whole thing totally fell apart.

Not the end of the story…

The folks on the big boats saw the problem and suggested a solution. Each ship could make whatever decisions it wanted as long as that decision only affected that particular ship. For decisions that affected the fleet as a whole, each ship would get 2 votes. That way, democracy would be preserved and the small ship crews would not get transformed into second class sailors with no say in how things are run.

The fleet agreement gets ratified, and is immediately a great success.

So successful in fact, that within a few short years, 37 more ships join up. Now… managing a 50-ship fleet is a whole lot more challenging than managing a 10-ship fleet. Before long and out of necessity, “experts” on various different fleet issues begin to emerge. Some are more charismatic and ambitious than others and these become more powerful and influential. This group becomes understandably frustrated with how long it takes to get things done. They get really frustrated when what they see as a “common sense” initiative get blocked by someone who has no real knowledge about the issue being addressed. Like, for example, the rising occurance of cargo net accidents.

They are successful. They pass the new rules. They have saved lives. They congratulate themselves on their wisdom and compassion. And… of course, they realize that extensive training of cargo net inspectors is a necessity. Otherwise they can’t do their jobs properly! A very modest increase in fleet dues will easily cover that cost. They get that done too with each small-ship sailor again responsible for paying 527% more than each big-ship sailor.

Rumblings about the “cargo net tax” immediately begin among the small, cargo-net-free fishing boats. The rumblings soon spread to the other smaller ships. What other rules are going to come down from the 11 big ships? “Are we the next ones in line to get forced into doing some utterly useless, value-free, dumb thing?” become the burning question of the day.

You can see where this is headed. One by one the leaders of the small ships realize that leaving the fleet is really the only viable option. Yes, the benefits of belonging to the group are great, but little, solo fishing boats have been viable for thousands of years. In fact, their statistics show that over half the boats in all the world are about the same size as the smallest in the fleet. There are 64 solo boats out there – 27% of all boats that exist – that are smaller than the smallest boat in the fleet. They decide they can go it alone, especially since all those fleet membership dues could also then be redirected back into improving their own ship.

So ship by ship the fleet falls apart and sails off into the sunset.

OK, so fine… It’s painfully obvious by now that I’m not really talking about 13 ships that formed a wildly successful fleet around a brilliantly written fleet agreement and grew into a 50-ship powerhouse.

Just like the ships, 4 of the 13 original colonies were home to about 54% of the new Americans. Just like the ships, 11 of the U.S. states today are home to more than 50% of U.S. population. Roughly 60% of the countries in the world have fewer people than the least populous states. 64 countries have fewer people than Wyoming, which ranks #50 among the states in population.

Article I of my imaginary “Fleet Agreement” laid out how decisions were to be made – the “legislature.” Article II and a later Amendment to it, laid out how the top leader of the fleet got elected – an electoral college if you will – for the top Admiral. Both of these processes reflect the essential fear of “The Tyranny of the Majority.” (Some call it the “Tyranny of Democracy.”) Ditto all of the above for the United States Constitution.

Need a little more memory refreshing on what “The Tyranny of the Majority” entails? Just remember the fable of “The Two Foxes and the Chicken.” The three take a vote on what to have for lunch. Pure democracy is not a good system for the chickens – or the small boats – or the small states. Pure democracy, in fact, is a TERRIBLY HORRIFIC system for chickens – or small boats – or small states.

So don’t come whining to me that Wyoming, with its population of 580,000 gets the same 2 Senators that California gets with its 39 million. And don’t ever come whining to me about how so-and-so won the popular vote, but lost the election. Please, don’t make yourself look foolish by calling for the abolition of the Electoral College.

Without 2 Senators per state and the Electoral College, the U. S. Constitution would NEVER have been ratified. NEVER! And the dream of a United States would have fallen apart before it ever really got started.

Change Senate representation to something based on population and/or abolish the Electoral College today, and discussion of the catastrophic impact would EXPLODE.

Think the likelihood of secession is a crazy, over-the-top speculation? Me doing some fear-mongering? Think again. Abolishing the Electoral College is a fundamental and radical change to the American Way. It would disenfranchise all of the people in 39 of the 50 states. 78% of them. Talk about the 80/20 rule in action! 80% of the states would have no power whatever at the federal level. It would spark radical reactions.

Secessionist movements are already alive and well. They have been – literally – for all of U.S. history. Check out this history of Secession in the United States and this current List of Secessionist Movements. It’s not limited to right-wing or left-wing either. Both California and Texas have hives of activity. Since 2012, petitions have been filed on behalf at least 20 states including Alabama, Arkansas, Colorado, Florida, Georgia, Indiana, Kentucky, Louisiana, Michigan, Mississippi, Missouri, Montana, New Jersey, New York, North Carolina, North Dakota, Oregon, South Carolina, Tennessee, and Texas. Again, notice that the list runs the gamut from red to blue and small to large.

So don’t be the dullest knife in the drawer. Don’t advocate a catastrophic change to the constitution.

I’m your host Todd Youngblood, urging you – the next time you hear someone advocating abolishing the Electoral College – to tell the story of the 13 ships that thought they could form a fleet. No, the Electoral College is not perfect. But to paraphrase Winston Churchill, it’s the worst way to choose a president, except for all the others. Oh yeah… And just for the record… I’m still having more fun than anyone else I know.